These are listed in no particular order of enormity, except the last, which is the most grave.

1. I tried to knit a sweater and realized when I was starting the fourth of six skeins of yarn that I would not have enough. I realized this in November and put the project aside. I just now remembered and it's a fresh wound all over again. I'd like to make something nice out of this yarn. Maybe I'll just make 10 scarves.
2. The kit I have for the cross stitch I've been working on since 2008 (have I mentioned this enough?) did not come with enough of one color of embroidery floss. Luckily you can call the company and request more of the color you're missing. Unfortunately, the people who work at the company have sent me the wrong color. Twice! It's the only color I have left to do so I am essentially at a stand still. I was on such a roll too.
3. I've finished two dresses recently. Only problem is it's too cold to wear them.
4. I got this new facial scrub. I love it. I dropped it in the shower the other day and the bottle broke. Now it leaks everywhere. That stuff costs a lot and it's dripping all over the shower.
5. The tennis bracelet Charlie bought me for Christmas lost a jewel today. Luckily he bought the lifetime guarantee. He knows me well. 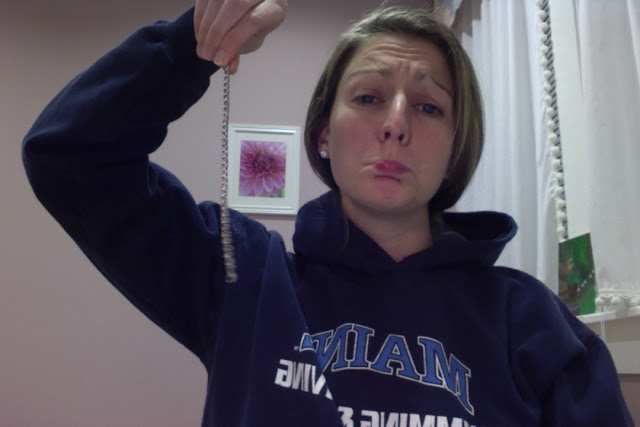 6. I am making another dress/shirt and I have deviated so much from the pattern that I am now completely lost. The pattern is 0 help, because of above mentioned deviations. The fabric is a pain to sew too.
7. I accidentally pulled out my retractable tape measure out too far and it won't wind back up.  Now I'll have to keep it in a crumpled mess.
8. I've been watching Gossip Girl on Netfix while I sew. I know it's a dumb show, but I like it. It's mindless, I like the clothes, it doesn't matter if I miss 10 minutes because the sewing machine is loud, and most importantly I love/hate Blake Lively. Also, Charlie hates it so it doesn't matter that I watch it while he's not home. In fact, he prefers that. The problem is that Nexflix only has seasons 1-5 and not the last season.
I can only get the last 5 episode of season 6 on Hulu, not the first 5. Who wants to watch the last five without knowing what's already happened? Hulu.....


Will someone who is tech savvy please help me with this?

Labels: 27, life, terrible pictures of me