Today was a big day. Charlie and I completed a home improvement project without getting into a single argument. I saw a time-lapse video of my cousins wedding from this weekend and thought it would be fun to do one of our project, so here it is.


More about the finished project once it's totally complete. So I guess that means there is still time to get into a fight. Let's hope not though.

Although we didn't fight I did smash my thumb with a hammer, twice, and also smacked myself in the face with a board. A few curse words were uttered, and we had to make an emergency run to the hardware store for appropriate hinges.

Can you tell what this project is? 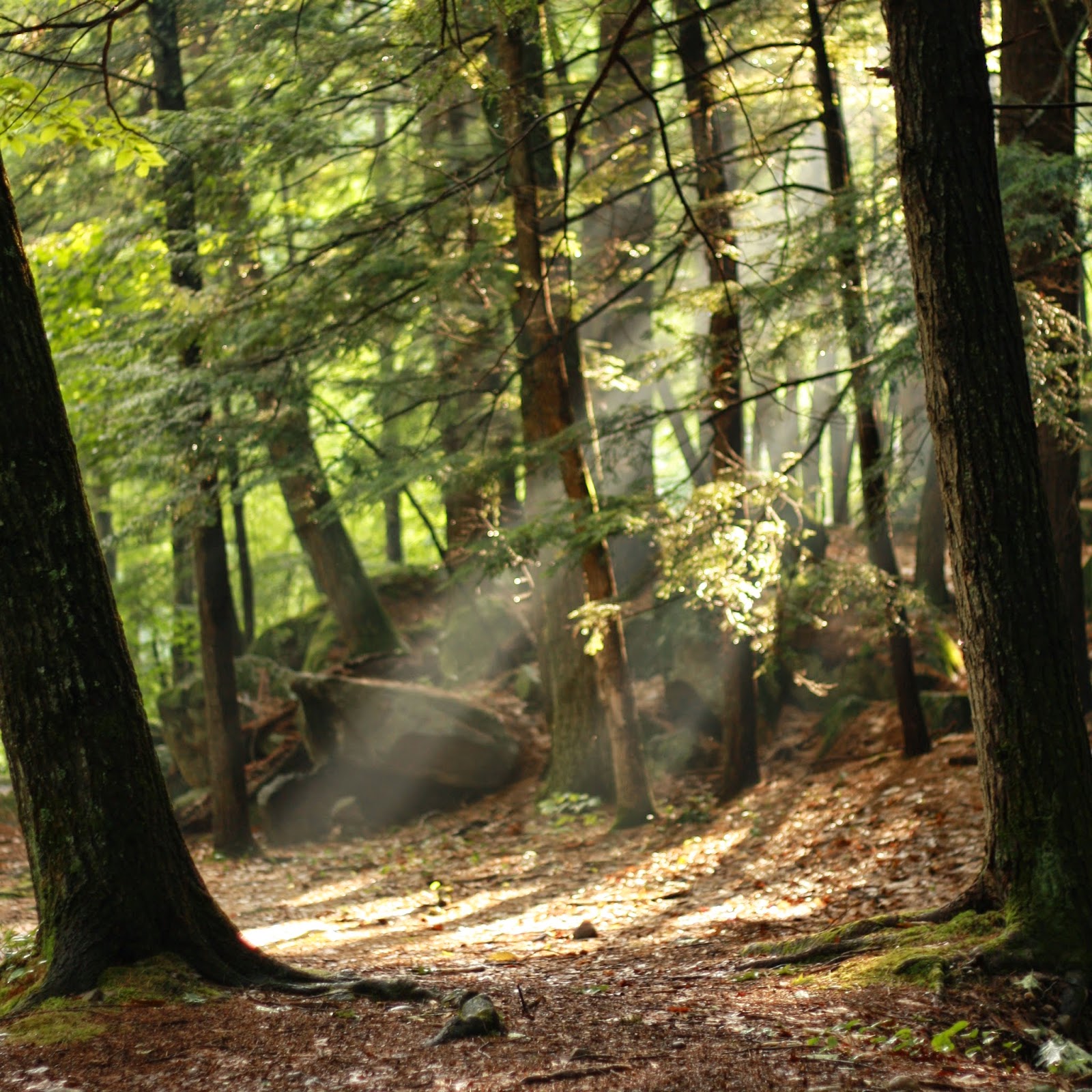 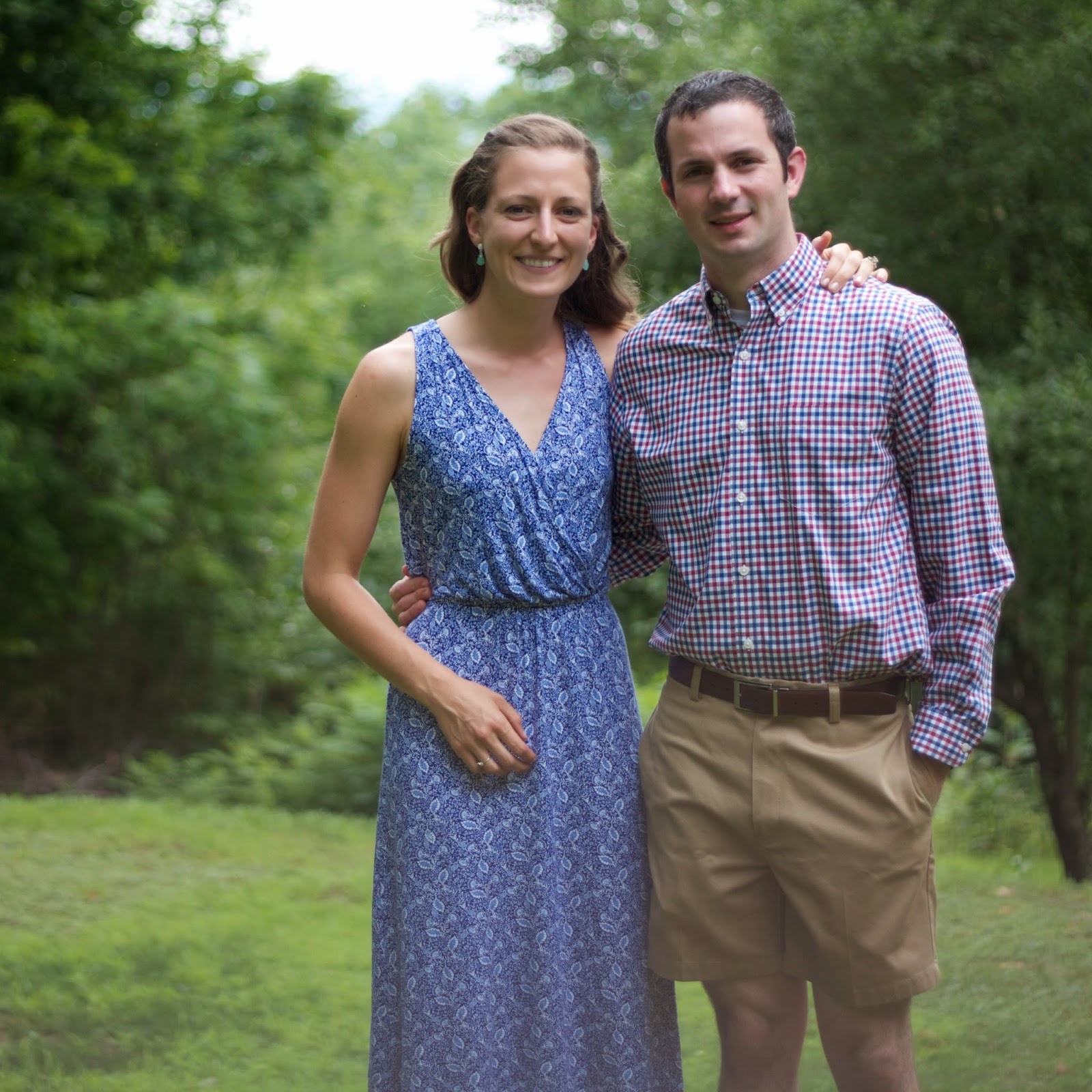 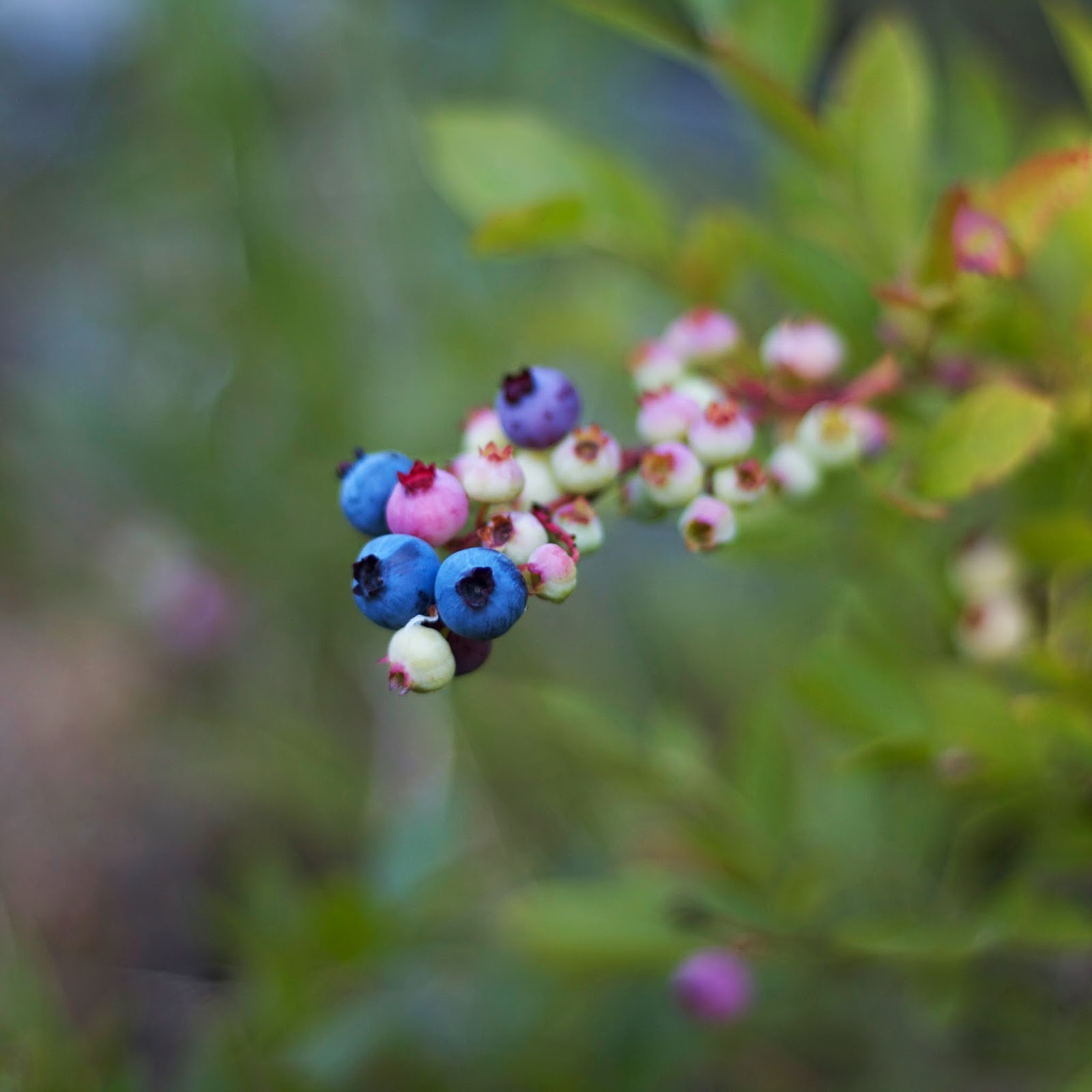 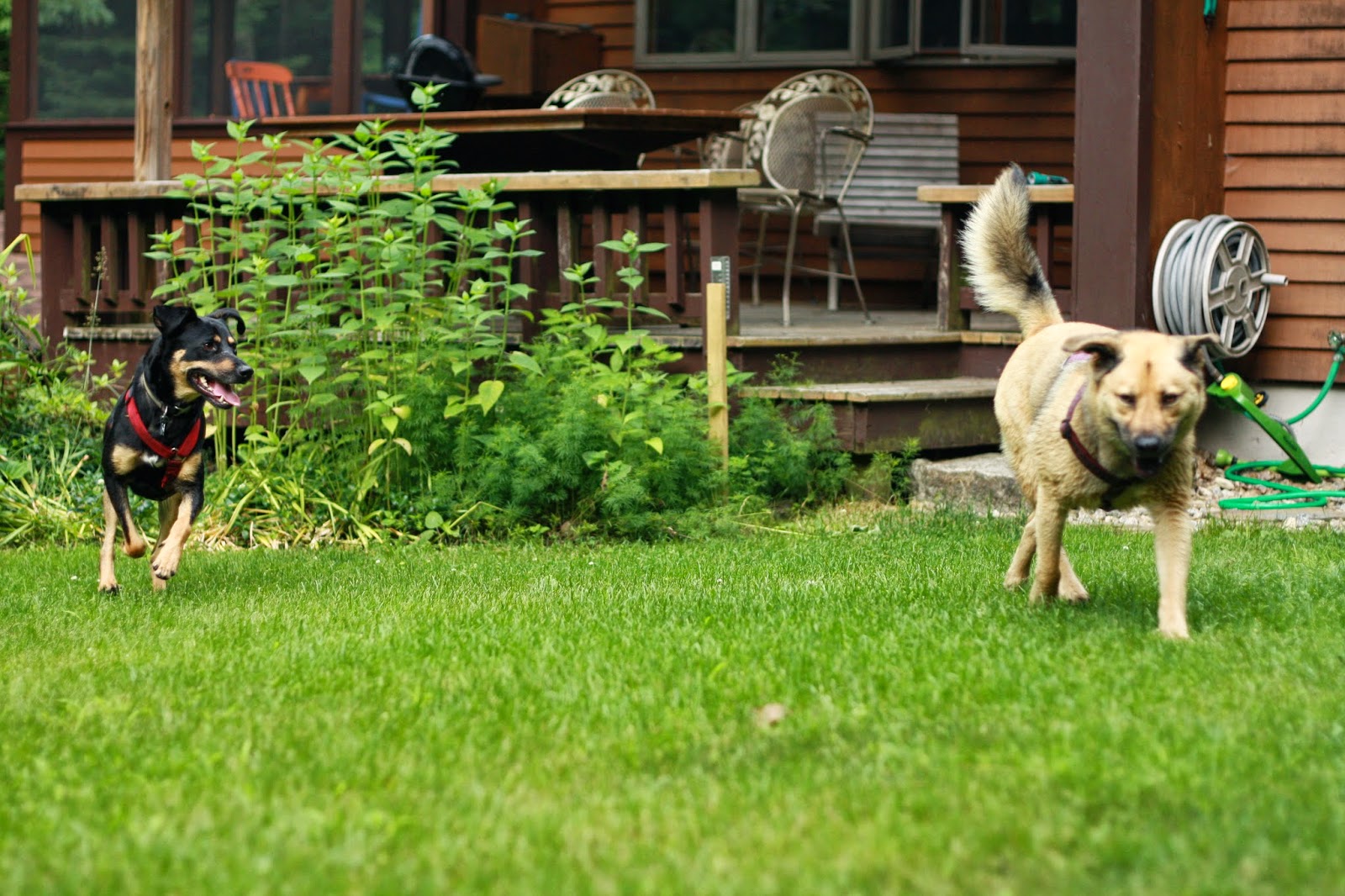 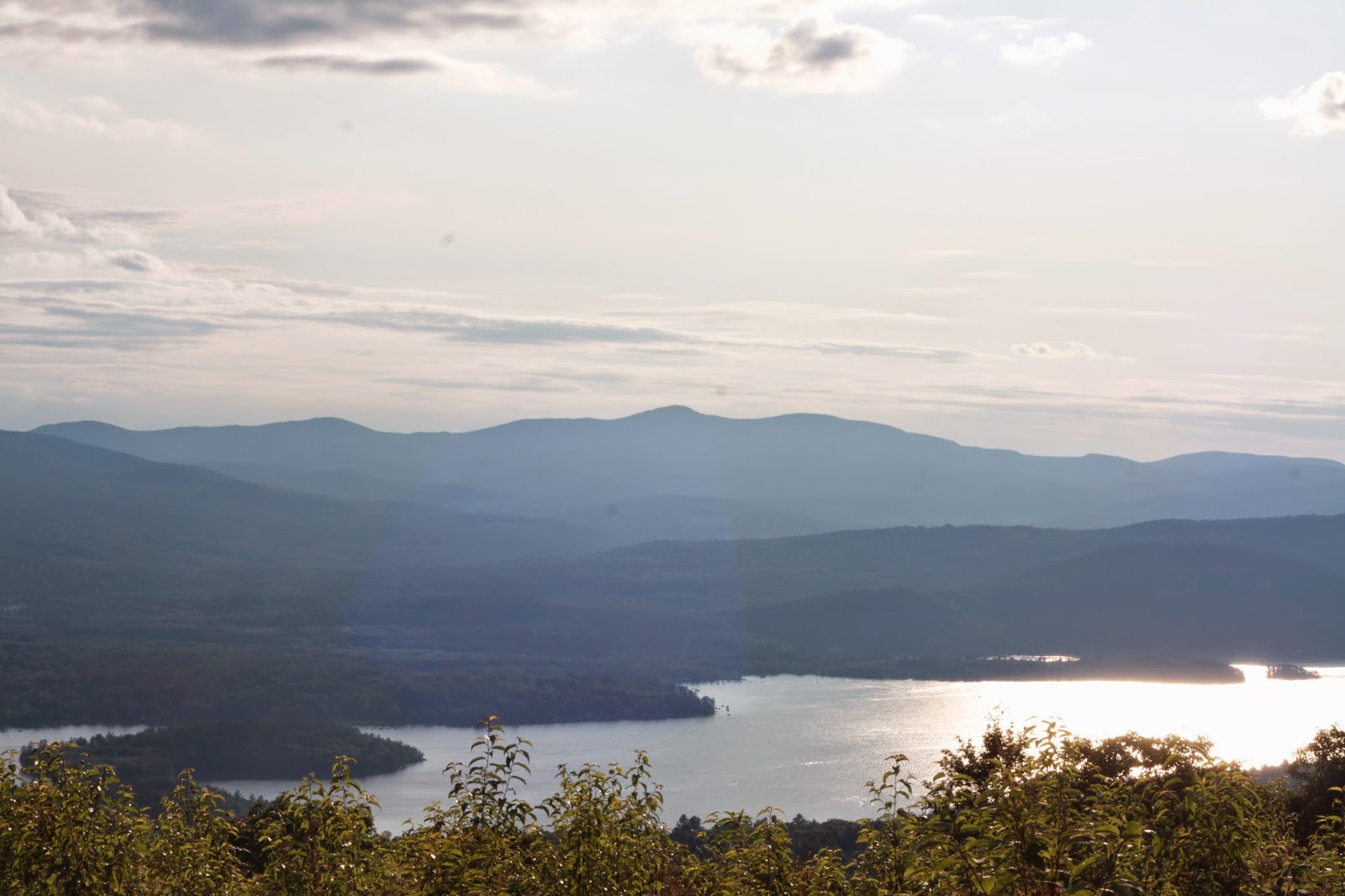 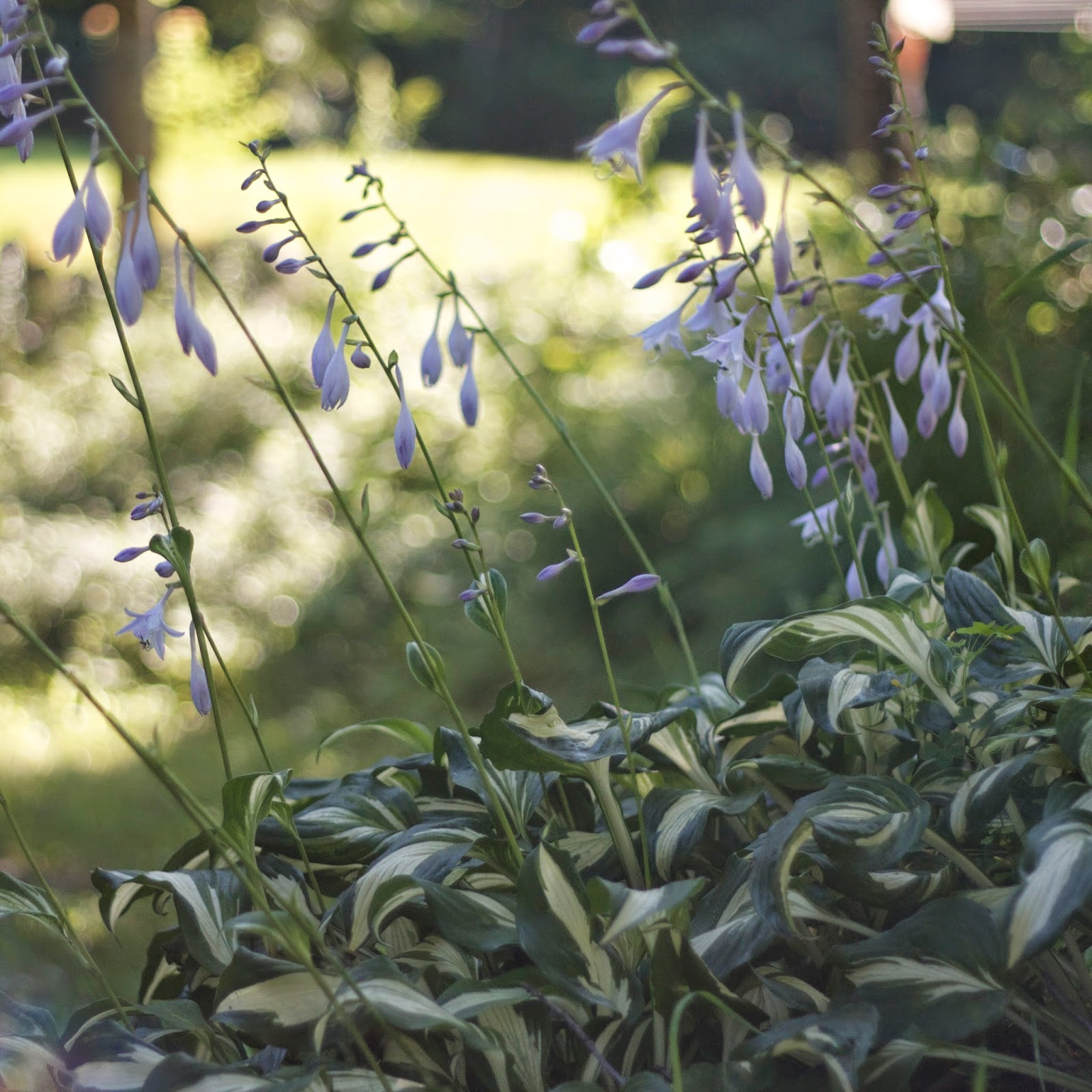 Currently I am/ we are:

Amazed that it's been three years since we got married. How'd that happen?

Marveling at the plants that are growing, most with no help from me. And also constantly checking in on the plants that I've been fussing over and are doing nothing. I have a 2 foot tomato plant I grew from a seed that has no flowers or fruit. It keeps getting taller, but producing nothing.

Hiking to "the best view of Bristol" IMHO and sharing the view with a huge black bear. I honestly almost pooped my pants. Making plans to hike there again to see the sunrise. Even though that's really early!

Taking a photography class online. Charlie is super tired of me asking him to model, so blueberries and houseplants for the win in terms of models!

Spending lots of time outside; reading, eating, playing games, running, staring at the garden hoping zucchini will grow before my eyes.

Missing my middle toe nail. I have no idea how it fell off, but it did, and now it hurts. Guess I'll paint the skin in hopes of hiding the hideous disfigurement this weekend.

Struggling with how much to share here. I don't know how to "keep it real" while also not opening myself up to having lots of people know things about me. I go back and forth on deciding to make this blog private so I can go back to it being my random thought place, or keeping it public so anyone can see it, but being more private about what I share.

Getting ready to head to Maine for my cousins wedding. I'm so excited.

A few weeks ago the sight of the red racing stripe in the guest bedroom got to be too much for me to handle one second longer so the paining began. As with all the other (count em 6 out of 10) rooms in our house that we've painted thus far we also had to paint the trim in this room. I say "we" but Charlie let me do this all on my own while he did "man work", like dig holes and mow the lawn. I painted all the trim, all three doors in the room, and three window casings. I even painted the inside of both closets. I hadn't painted the inside of a closet in about 14 years so I forgot how terrible that ordeal was. Never again! 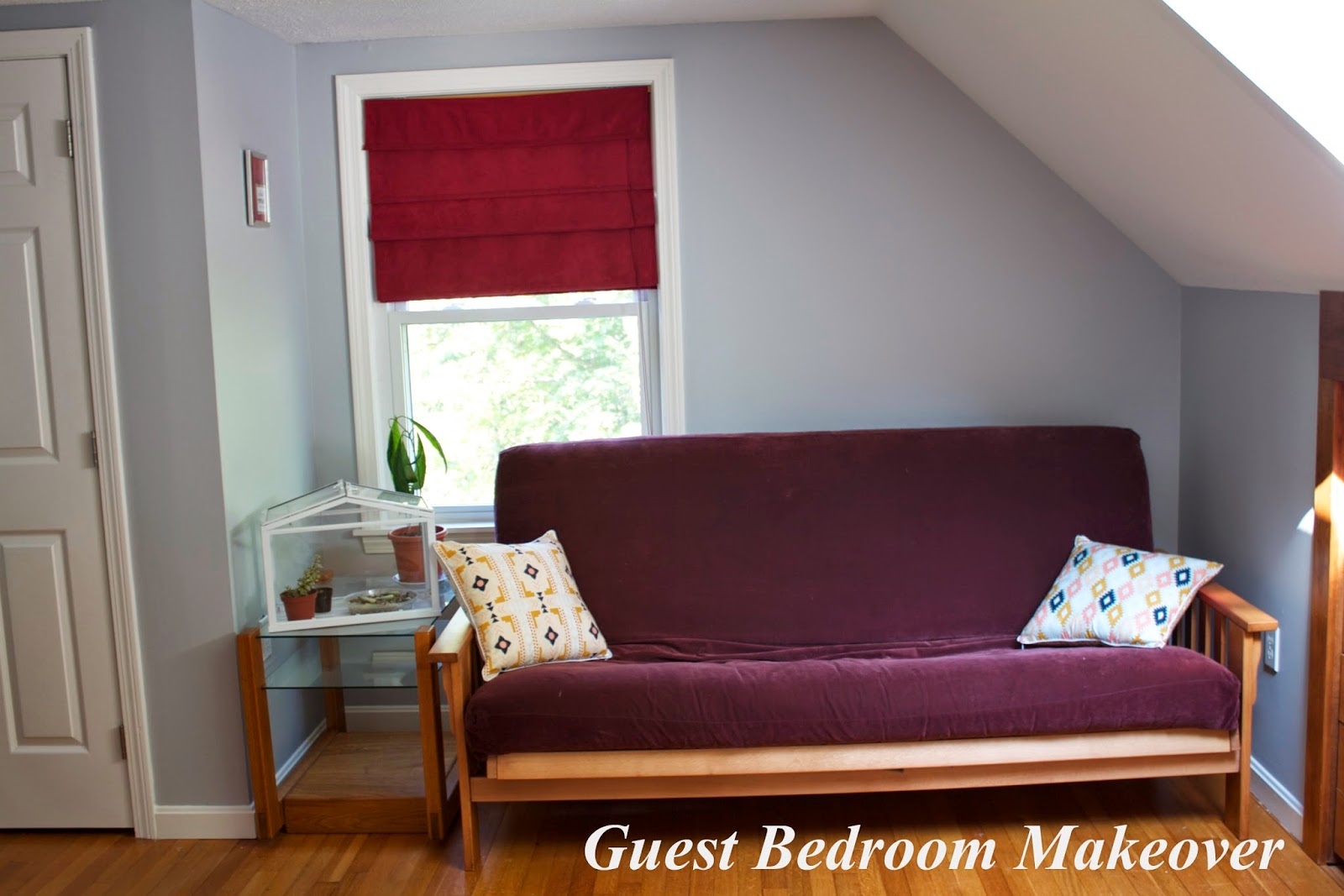 I puttered with the color a lot before ultimately just asking a friend the color of a room in her house that I liked. I find it hilarious that when I ask certain people they can tell me the name of the paint color of many of the rooms in their houses off the tops of their heads. I could tell you every color we've painted rooms in our house. I wonder if that's a sign that you're an adult. Or maybe it's a sign that you're crazy (no offense friends who are like me). Anyways, it's Benjamin Moore Stonington Gray. It came out a little more blue than I was hoping/expecting, but I am tired of painting so blue-gray it is. There are a few before and after shots of the colors. 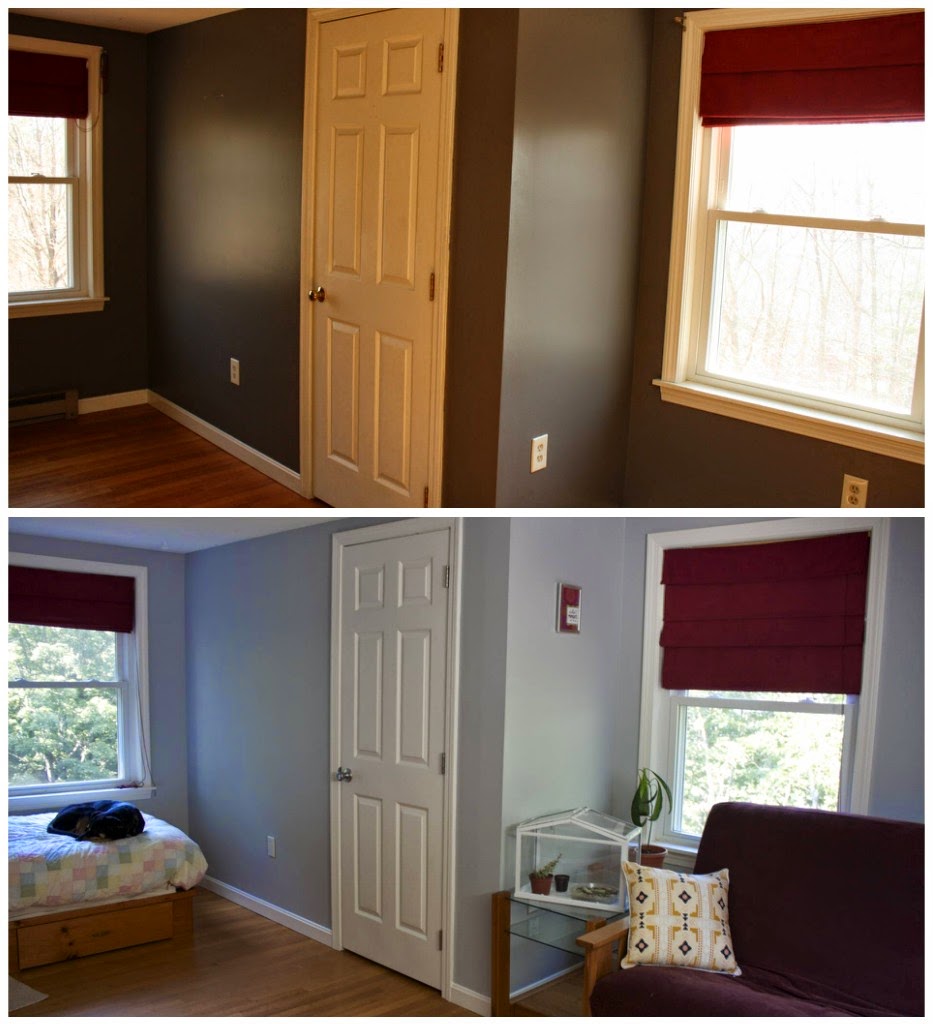 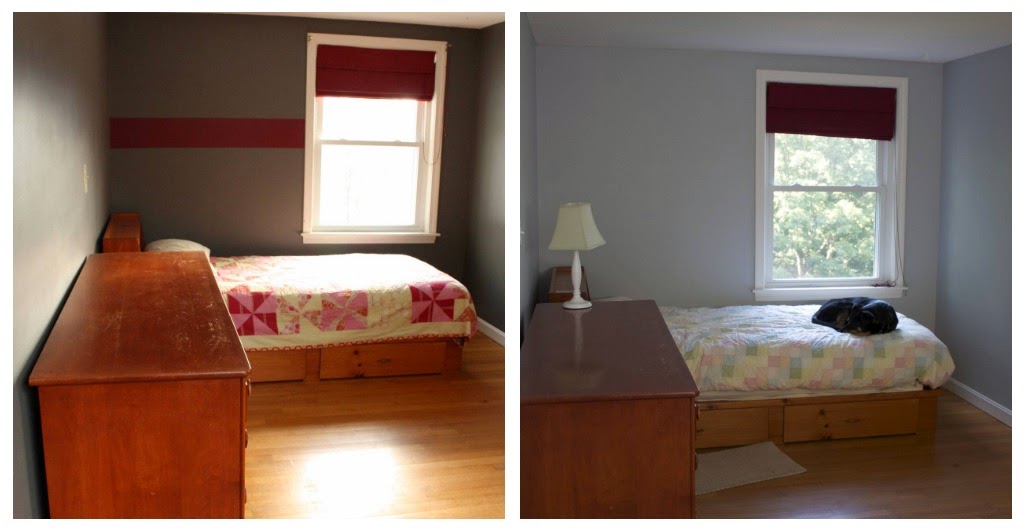 It feels brighter and bigger in the room now that it's a lighter color; at least I think it does. I'm just so glad to have the racing stripe gone. 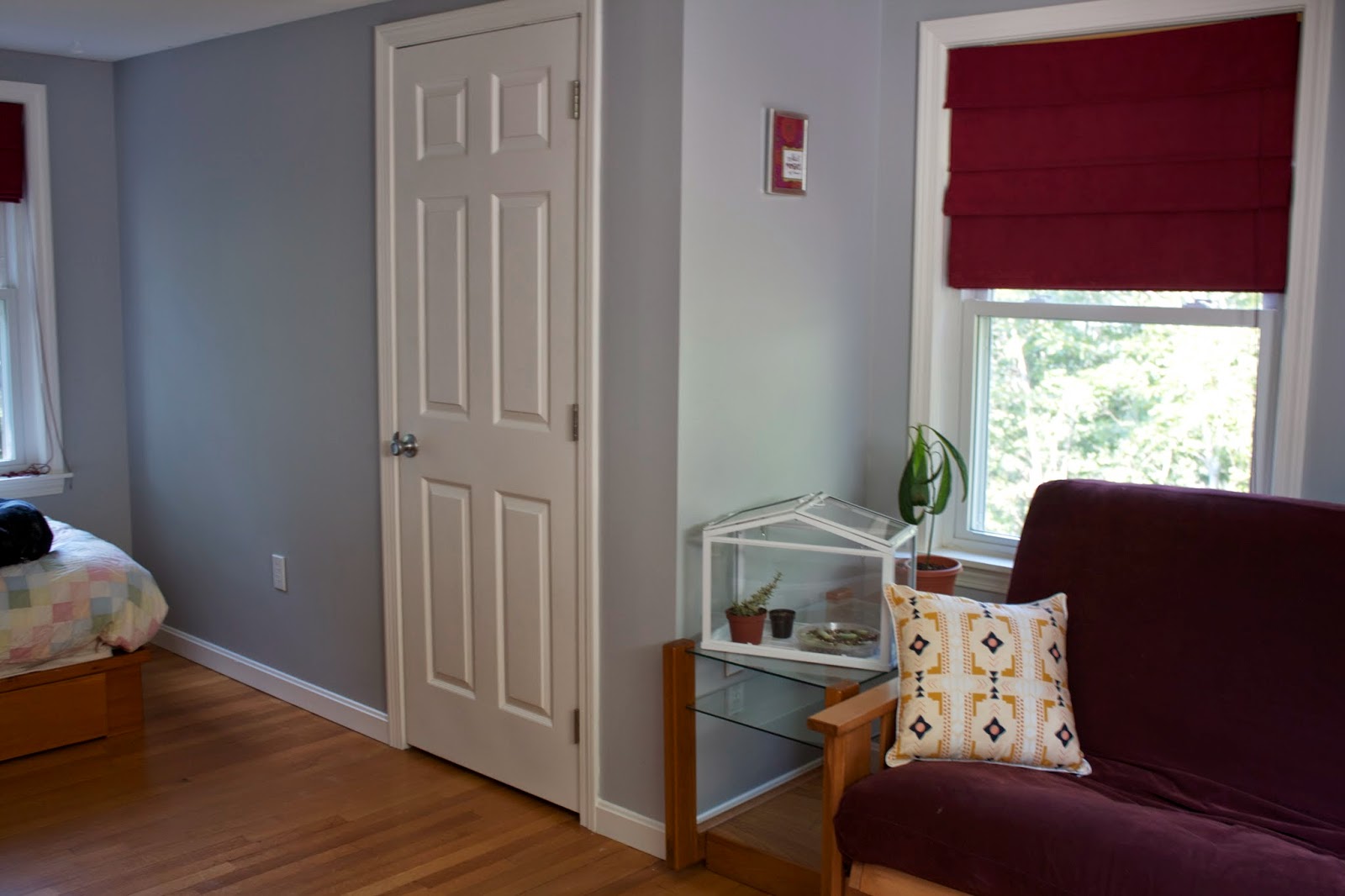 We decided to keep the curtains for now since there is nothing wrong with them and they block out a lot of light for guest who like to sleep in late. I might sew a lighter fabric to the existing curtain to cover it. Any ideas? I might also someday buy new ones. I just feel bad replacing something that has nothing wrong with it, except the color. 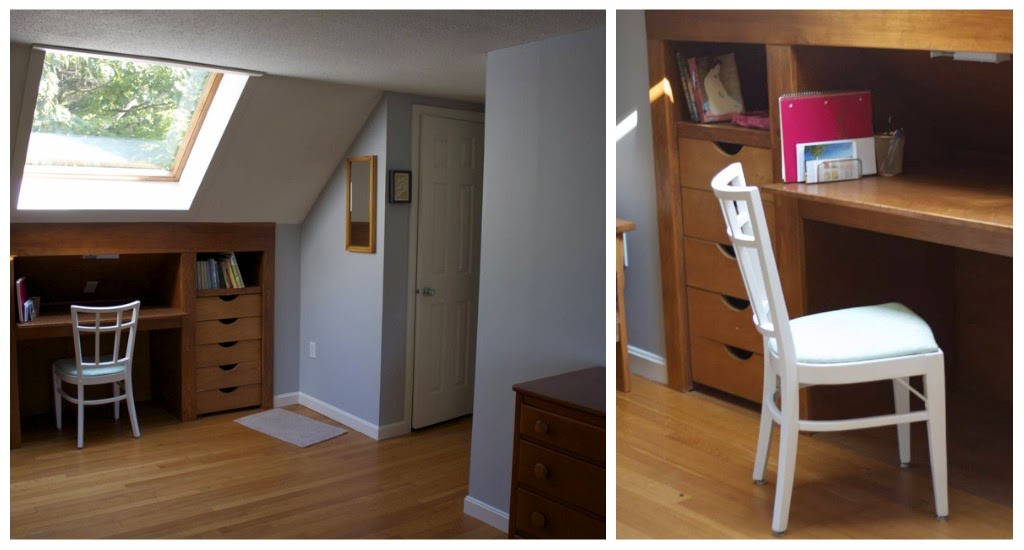 As part of my summer bucket list I have been writing one letter a week to my mom and have been loving it. Snail mail really needs to make a come back. In an effort to bring it back I made the desk area into a little correspondence area. I included pens, pencils, envelopes, stamps, paper and some post cards. I realize it's really cutesy and probably no one will ever actually write a post card or letter from this desk but me. It's still fun though. The little desk area needed a chair so I re-painted and recovered a chair I've had since college and have subsequently painted and recovered three times. The chair has lived in five places with me. This little chair gets around. 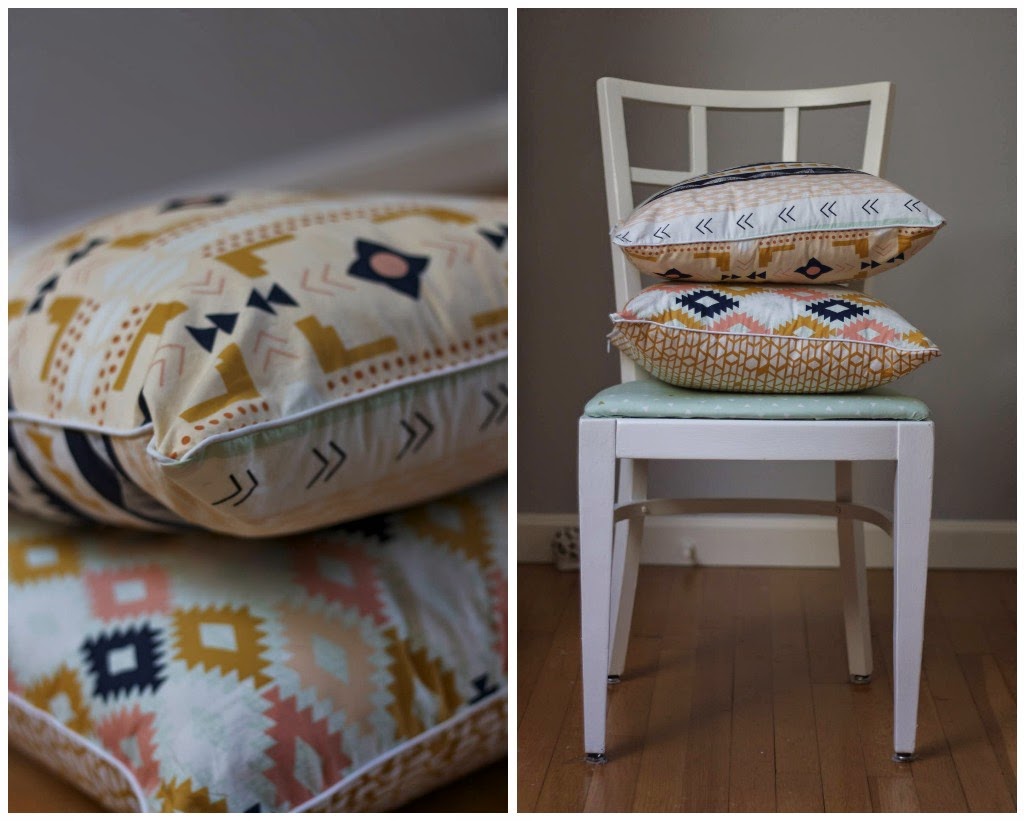 I used the fat quarters I won a few months ago to cover the chair cushion and make some accent pillows. Obviously I used pipping! I love that stuff. I still have a few fat quarters left, and some scraps. Any ideas on something else I could make for the room? I was thinking about making a mini quilt/wall hanging, but maybe not. 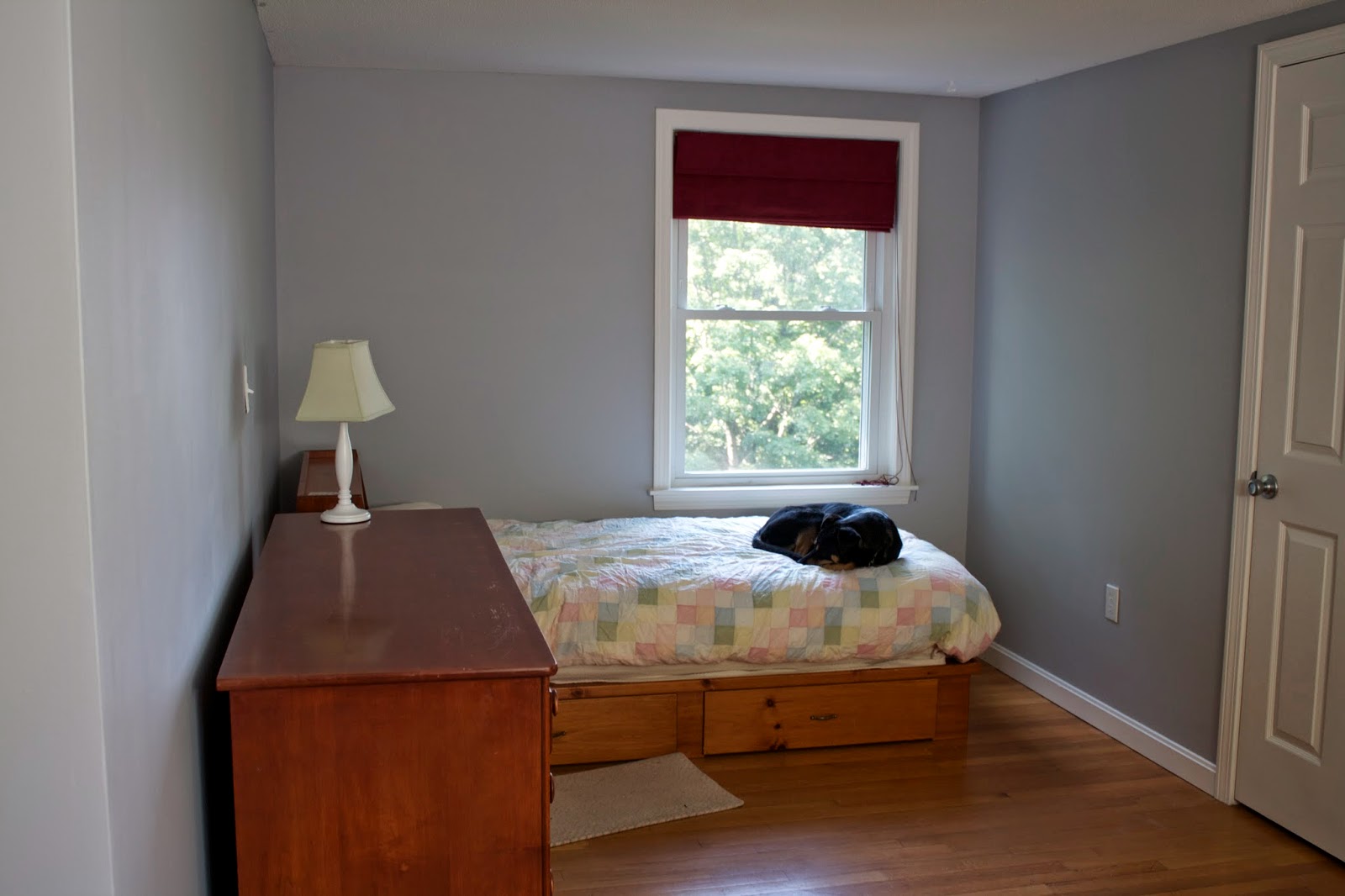 So far only Blaze and Penny have stayed here since it's been re-done. It feels very good to have this big project checked off the list. Most of the other things we're hoping to get done this summer are outside things.

This pattern was all the rage last summer. Well, at least all the rage in terms of bloggers I follow. In the fall the pattern went on sale, it's an indie pattern so I don't mind paying more than 99 cents for them, but less than $16 is nice too. Unfortunately the reason it was on sale was due to the fact that it's a summer dress and it was fall. I ended up buying a nice viole fabric to make the dress when I was staying with my family in Portland Maine for a conference in October. Then it all sat on a shelf until now. The pattern was so well written. It was super easy to follow, had great graphics, and needed minimal modifications. I guess that's why I don't mind spending more than a dollar ona good pattern. The sizing was confusing, as always. My measurements ranged from a size 10 to a 0. Huh? Anyone dare to guess which measurement was a 10 and which was a 0? On second thought don't guess. I ended up cutting out a four and it fit perfectly. 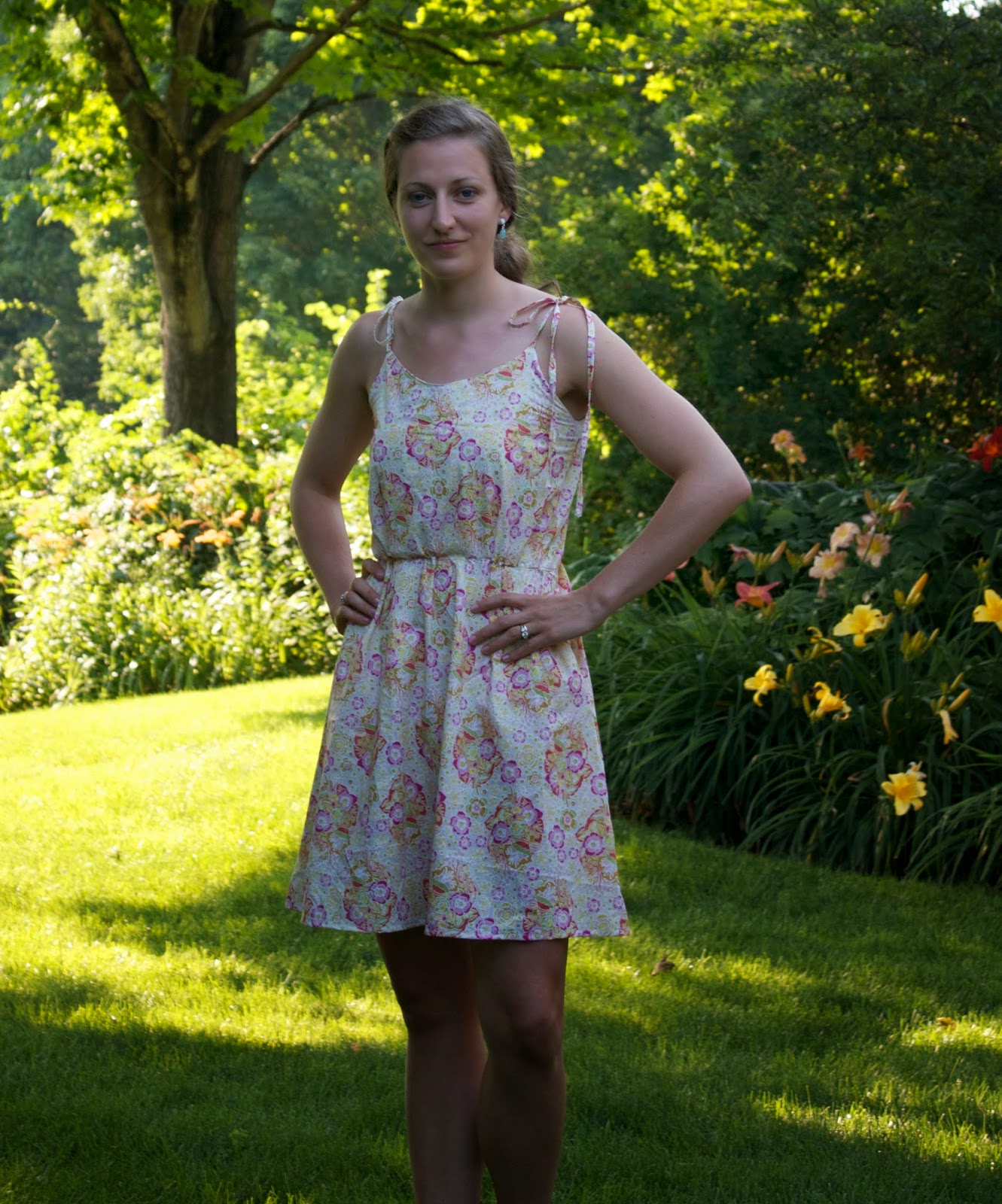 The zipper was a breeze to add in, thanks to my invisible zipper foot. The only bummer is its kind of hard to put on because the zipper gets stuck on the part of the dress where the elastic is.

Next time I make this dress, which I will, since I love it, I'll add a little extra seam allowance and do French seams. Do you use French seams? You really should. It's when you seam a seam once with the right sides showing, then again on the inside to hide the raw edges. It makes everything look so much neater, and results in less frayed fabric and random strings hanging out of your garments. It takes longer to do, but the end product is worth it. 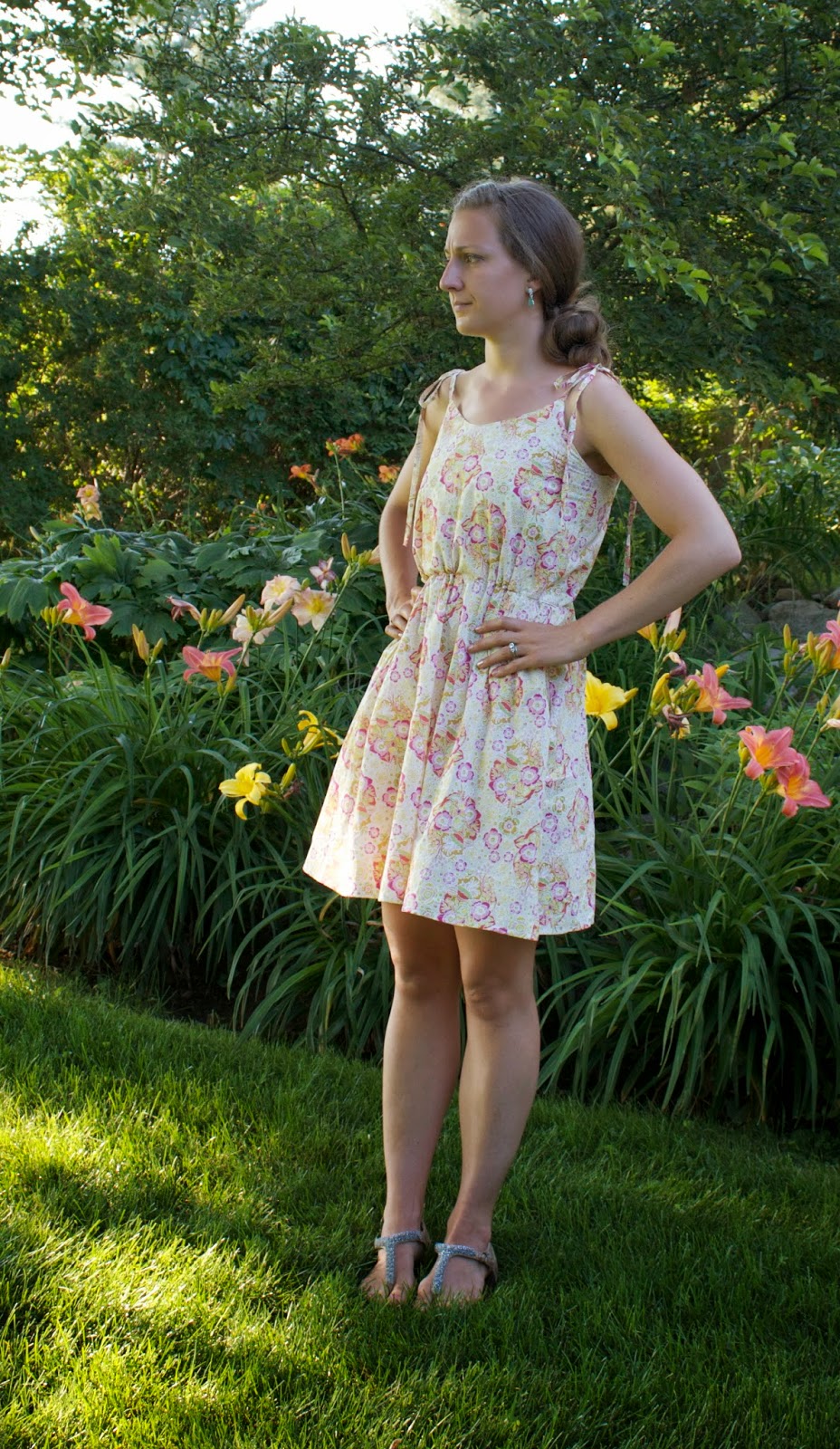 Back to the dress, oh yeah I love it. I might sew a maxi version next, maybe. Probably as soon as I do maxi dresses won't be popular anymore.

Hope you're enjoying the summer weather!

Romp? On Second Thought, Let's Not

A few weeks ago I saw a pattern for a romper made by someone I follow on Instagram. I've never had a romper, I've never even tried one on before. But I just had to have that pattern and sew one for myself. It just so happened that Simplicity patterns were on sale that week so I picked up a copy of Simplicity 1355, I also found a great summery print from Denise Schmidt (in case you haven't noticed she's pretty much the only designer I buy fabric from at Joann's), and the necessary notions (bias tape and thread).  Then all of it sat on my desk for 3 weeks. Mostly because I hate cutting out patterns, but also because I wasn't sure if I actually wanted to sew a romper. How does one go pee while wearing a romper? That was my main concern, as well as, what if my legs look stumpy?

I figured my hesitation was due to the romper-ness, but I still really liked the fabric and wanted something summery. Not to waste a perfectly good 99 cent pattern, I modified it and cut out the skirt pieces (much shorter than the maxi length of the pattern due to yardage restraints) and the romper top. It resulted in some major fudging, but I think the end product is okay considering. 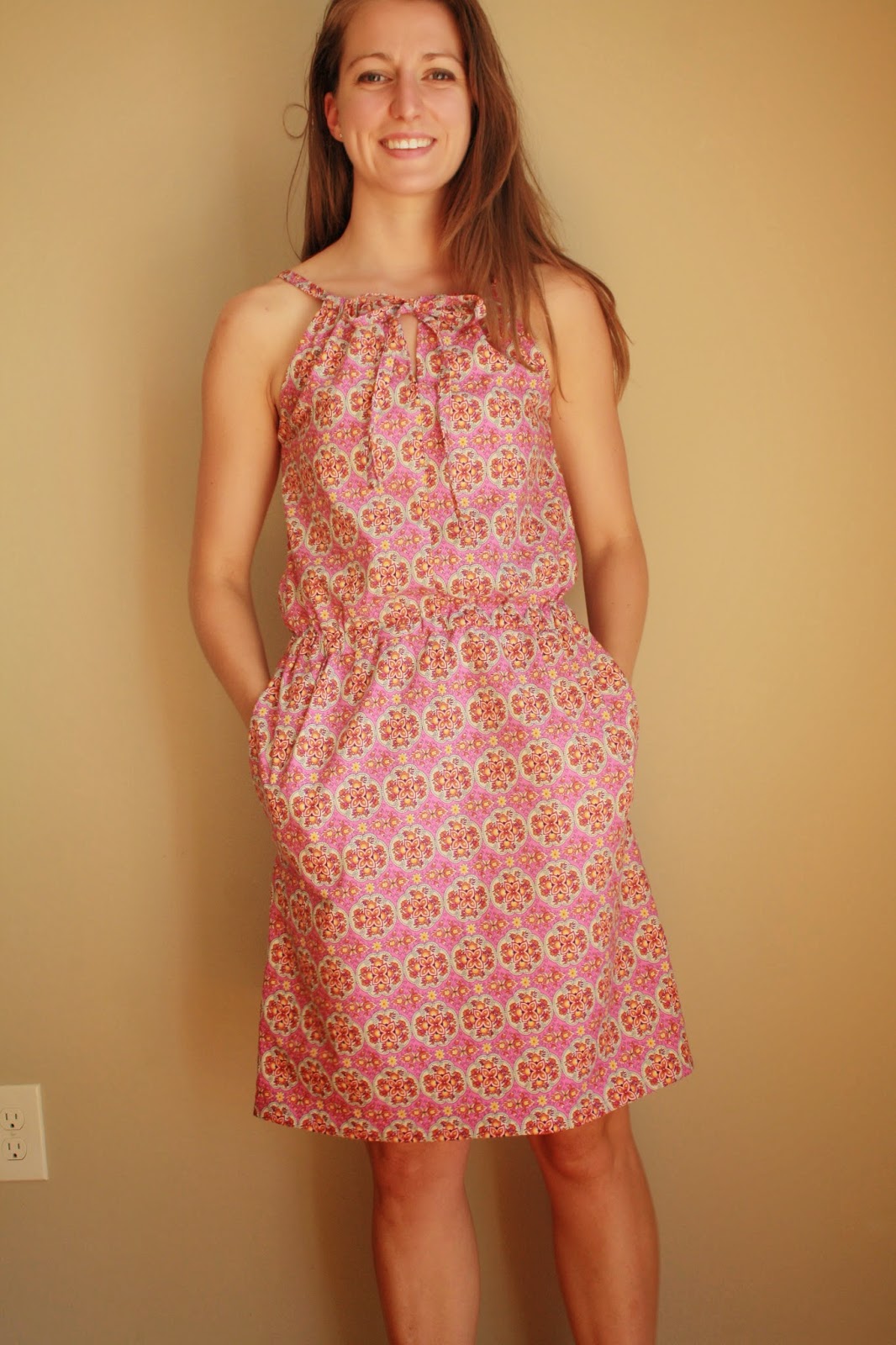 The pattern said to use the seam allowance as the casing for the elastic, but I used bias tape instead. If I made this pattern again I would shorten the top length by an inch or two so it sits more on the smallest part of my waist, not the widest. That's a bit unflattering if I do say so myself.

The upside is it has pockets! I stinkin love dresses with pockets. I didn't have enough fabric to cut the pockets out of the same fabric so I just used yellow fabric I had. I actually really like the pop of color.  My one downfall is that I am not good at matching the obvious pattern of the fabric. The front of the top is made of two pieces and they do not match, which bothers me because I know my grandmother would comment on it if she saw it in a store. Luckily I don't think anyone will notice but me. 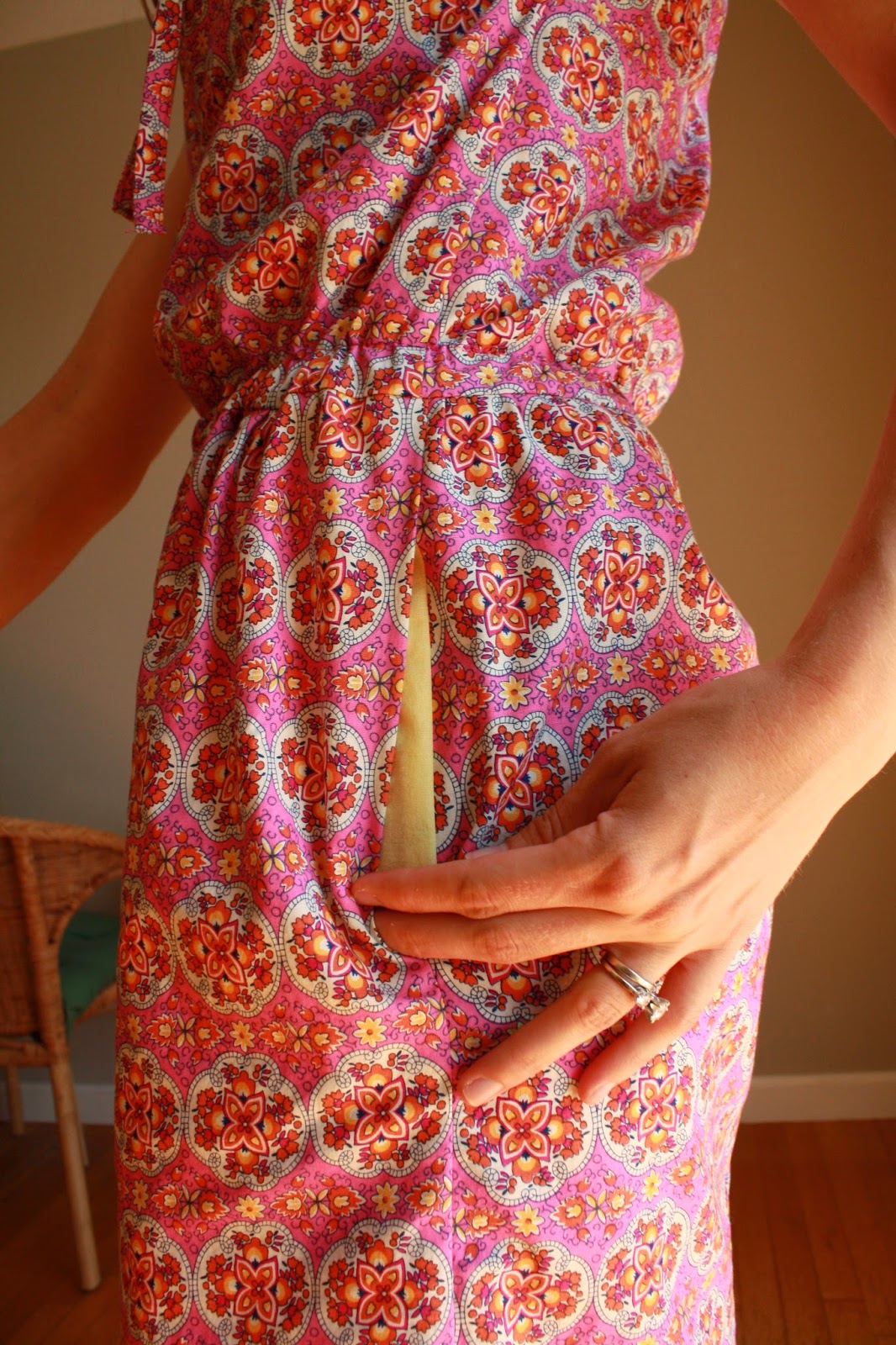 The non-romper took me about four hours, but will take less next time since I'll know what I'm doing. It's actually very comfortable to wear, and quite cool in the summer heat.

Lauren
Posted by Lauren at 6:07 PM No comments: