Charlie and I took Penny on a hike this afternoon. It finally feels like spring so it was great to be outside for the afternoon and soak up some sun. 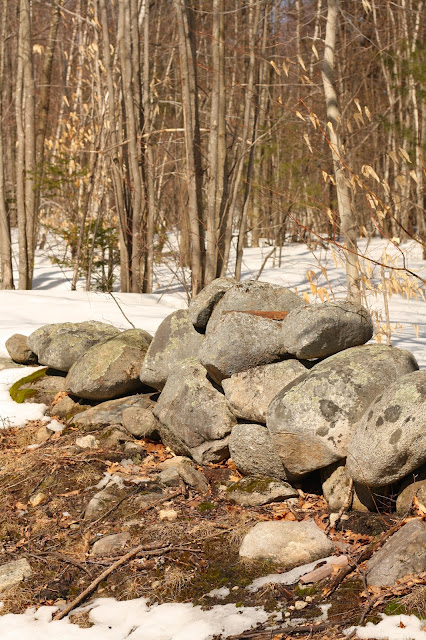 I love stone walls in the middle of the woods. It makes me so happy, and I love thinking about the people who built them long ago. 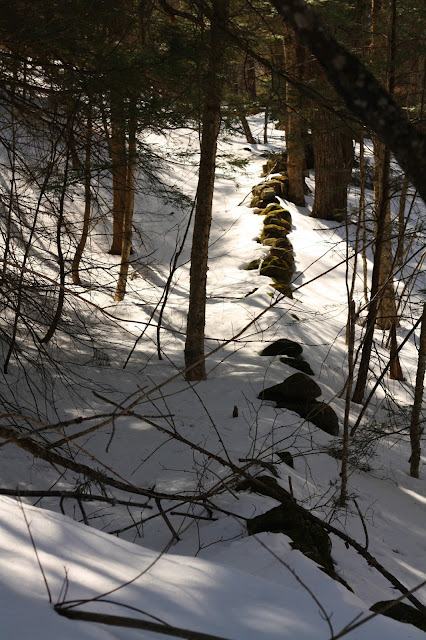 More stone walls. This is on the North side of the hill, where there was still quite a bit of snow. On the South side there was no snow, just lots of mud. 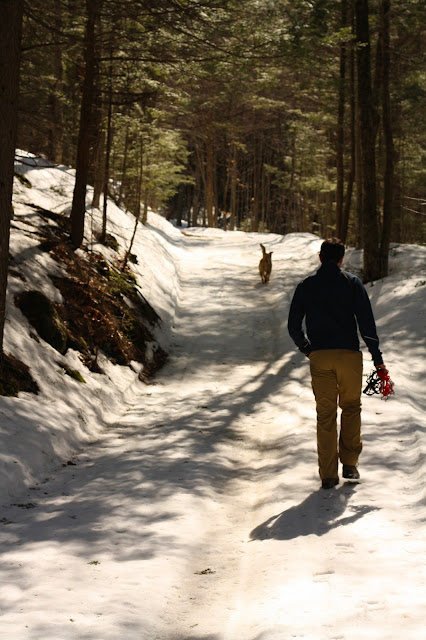 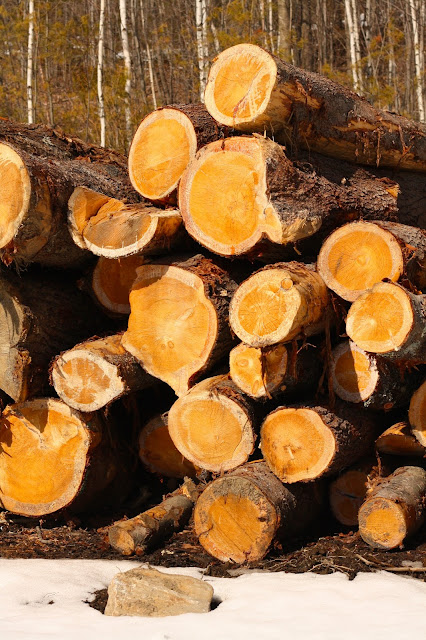 Logs in the middle of the woods. I love the smell of fresh cut wood. 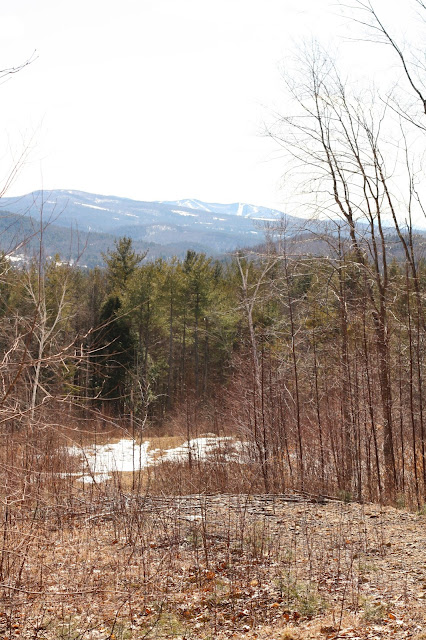 The view of Ragged Mountain. We're going skiing there tomorrow and I am thinking based on the warm temperatures we've been having lately this will be our last ski outing of the year. I'm sad to say goodbye to skiing since we have had so much fun this year, but excited for springtime adventures. Penny is excited to spend more time with us, and more time outside. 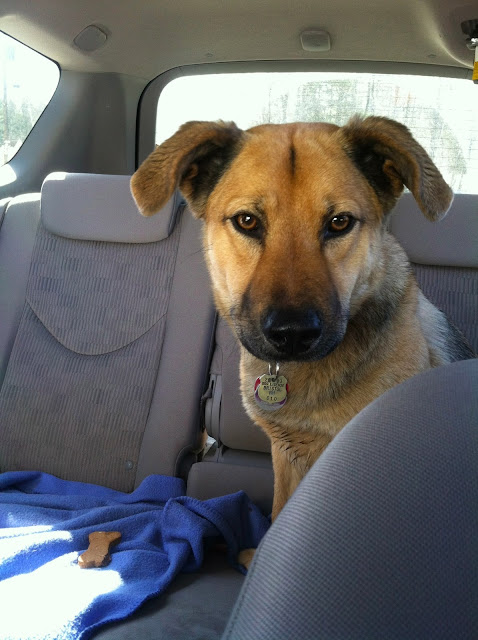 I bought her a homemade bone after our walk/hike but she didn't want it, she wanted my lemon poppyseed muffin instead.

Hope you're having a good weekend.

This past weekend my brother came to visit. We went skiing both days and had a blast despite the cold temperatures on Sunday. It was great to be able to spend time with him. He's quite funny and keeps Charlie and I laughing. 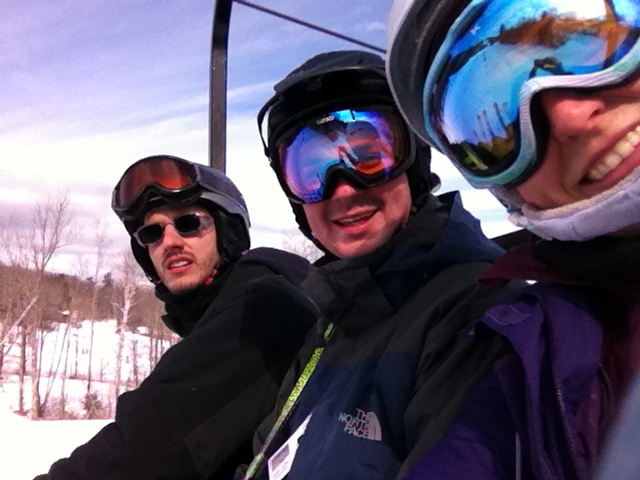 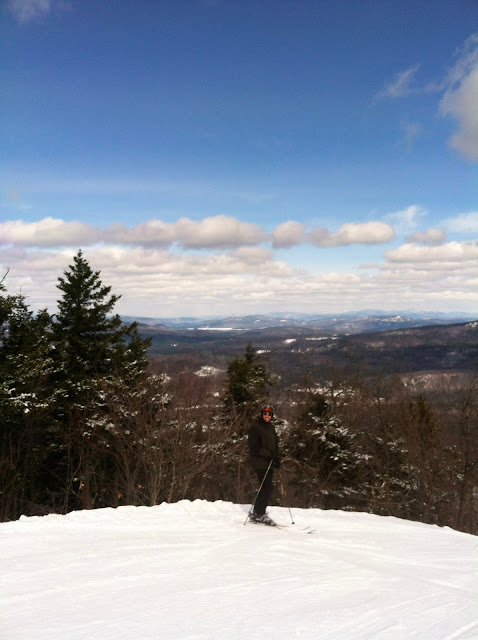 Today is a snow day, we've got about 9 inches and more keeps coming. Penny, Charlie and I have been out waling in the snow. Despite the stone cold look she really does love it. 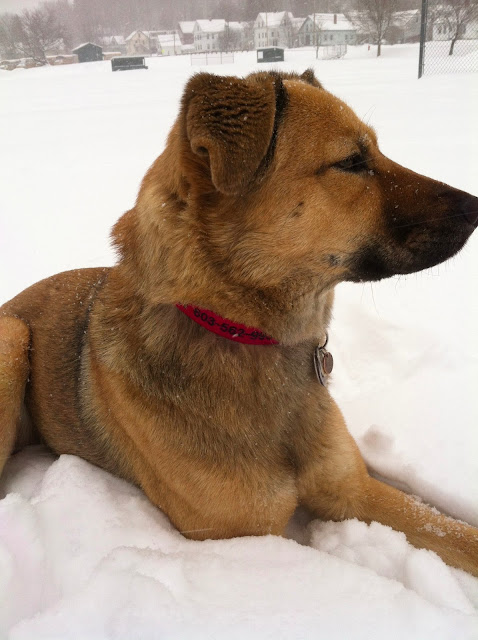 I've been working on a top secret project and watching endless episodes of "One Tree Hill." 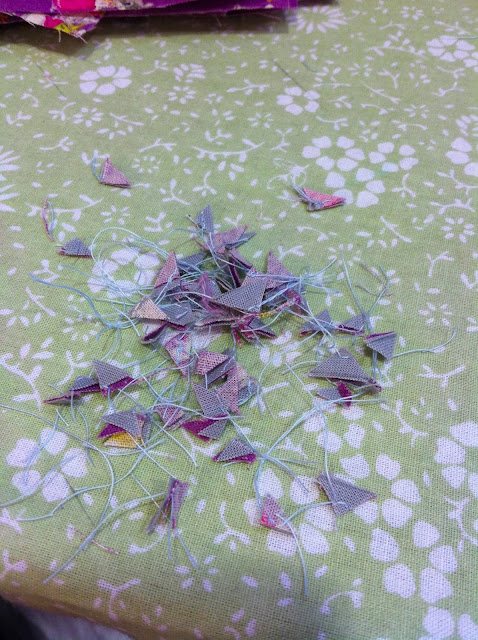 I just finished writing two IEP's, and after dinner I am going to work on this sweater. It's actually (knock on wood) turning out alright thus far. It only took me four tries to figure out what to use this yarn for. I only wish we had TV channels so I could watch SPLASH tonight. 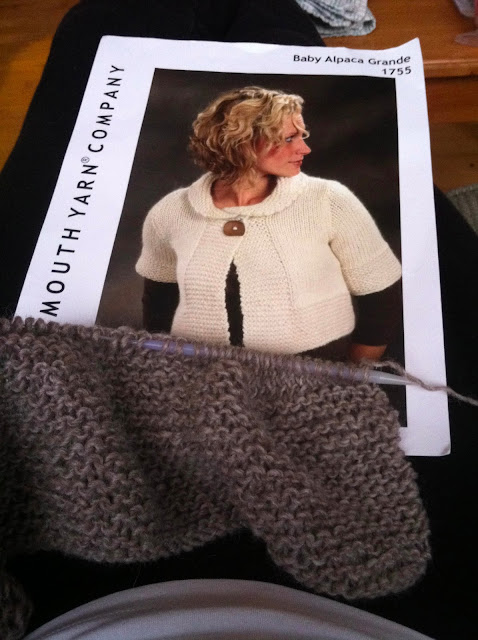 Hope you're enjoying the snow.

Today marks a year since we got Penny. We are so happy she is ours. It's been a fabulous year. I've always known I wanted a dog, and been a "dog person" but Penny has really solidified that feeling for both Charlie and I, especially Charlie, who was a "cat person" until Penny came along. She is so fun, and loving and just makes us smile all the time. We love her! 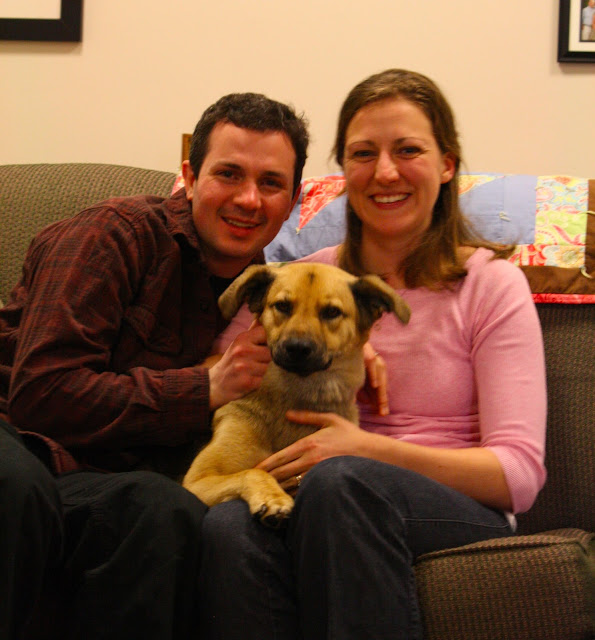 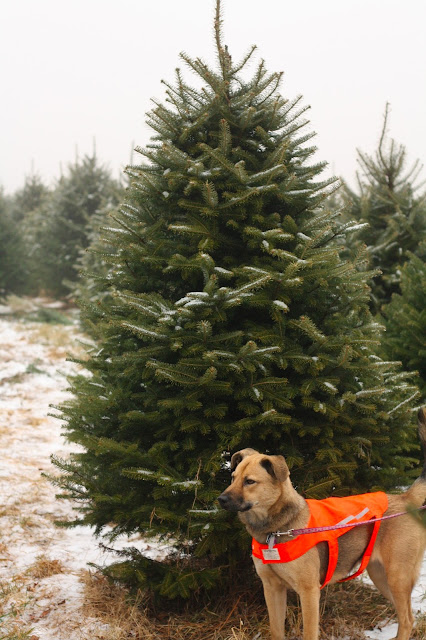 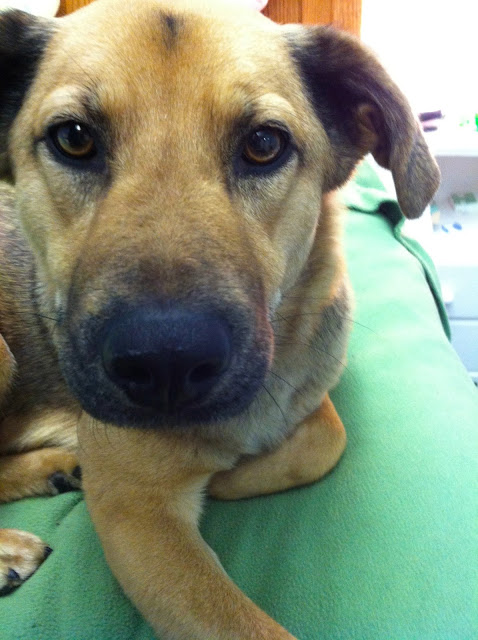 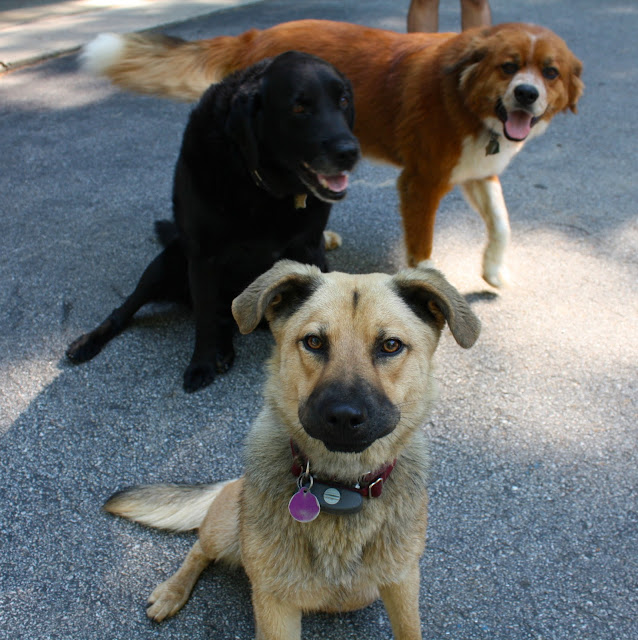 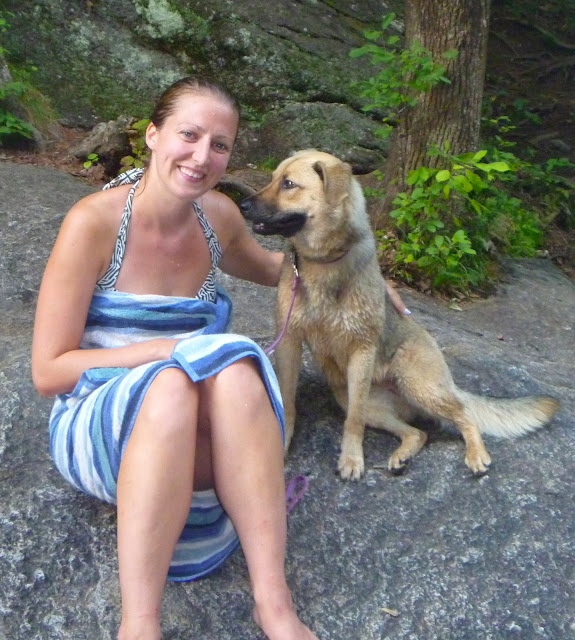 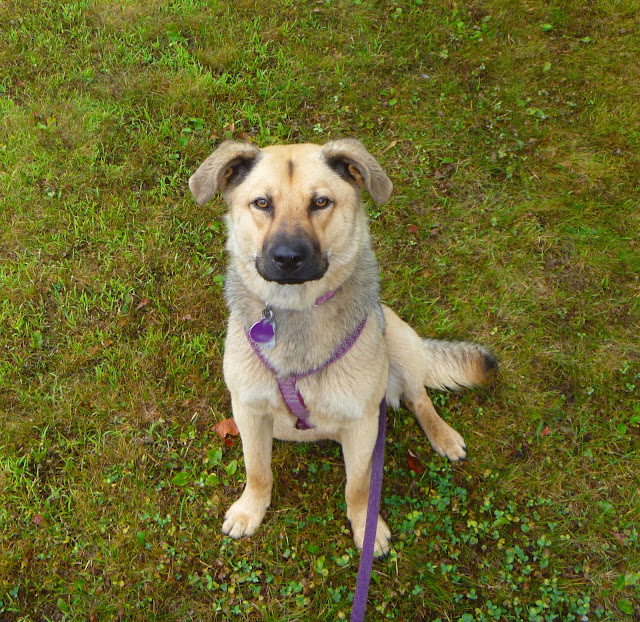 Lauren
Posted by Lauren at 10:00 AM No comments:

I couldn't go to the bridal shower because I was at my best college friends baby shower. She's not due until August but lives far away so she had one early with her family in Maine. When we were in college I knit one of these stuffed animals for my coaches baby and Lorelei told me she wanted me to make her babies one of these, then she told me she wanted to have 5 babies so I should get knitting. That was before we were married and I just laughed. At the shower we realized we've known each other for almost 9 years. Pretty crazy how many things have changed in that amount of time, we're both married, have jobs, live on oposite coasts, and now she's pregnant! It's funny how much hasn't changed either, we still laugh at silly things, talk for hours, and just have fun together. Sometime I wish we still shared a dorm room, or at least lived only one room apart so we could tap on the wall when we wanted to talk. This wasn't meant to be me reminiscing, oops. Anyways, as soon as I found out Lorelei was pregnant I knew I had to knit her baby a bear. 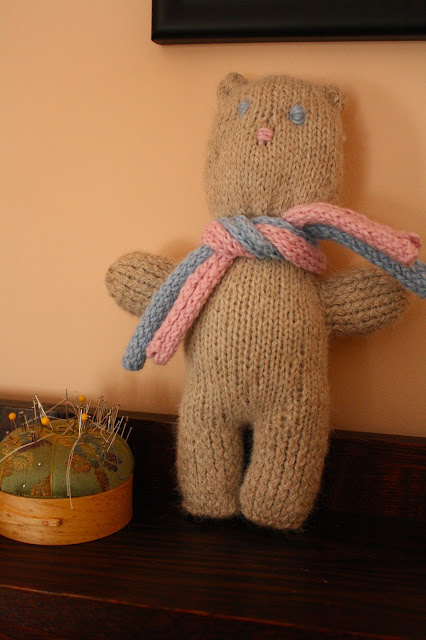 I knit most of the bear on the way to and from Canada. Thank goodness Charlie drove most of the way and I could knit and talk constantly. I also knit some at my aunts house. My 6 year old cousin (Macy) was very interested in the process. Lorelei and her husband are waiting until the baby is born to find out the gender. I told Macy I wasn't sure what color scarf to knit, she said "Just make two!" Seemed like an easy solution for the 6 year old who didn't have to knit the two scarves. I did it anyways. Luckily I am much faster at knitting and the scarves did not take too long. 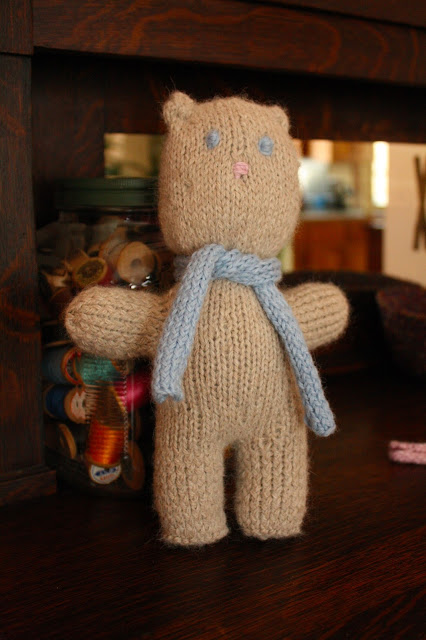 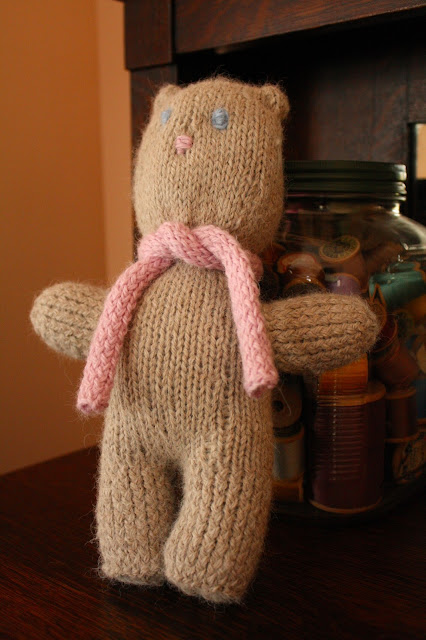 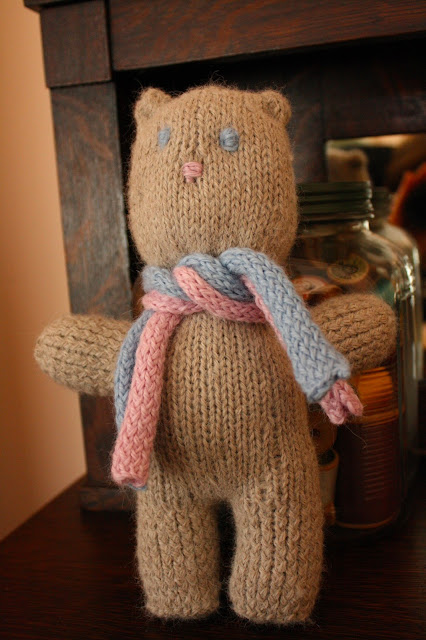 I think the double scarf looks pretty cool too. I realized I blogged about making this pattern once before, four years ago. I've made variations of the pattern four times, two prior to my blog creation. Hard to imagine a dark time such as that ever existed isn't it?

Charlie's cousin is getting married in May and his fiance, my soon to be cousin in law, had a bridal shower this weekend. I was not able to go (I have not mastered the being in two places at once thing just yet) but I sent a homemade apron to the party for her to open. 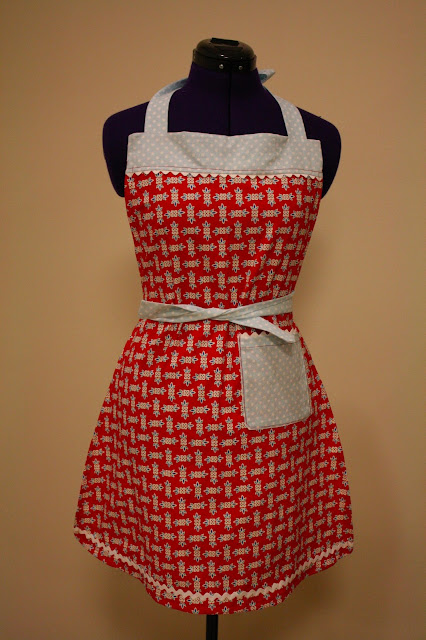 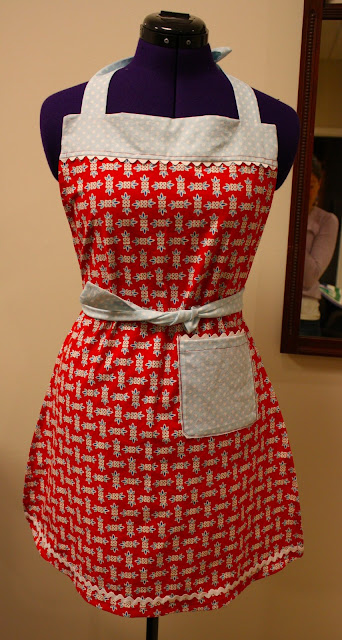 I might be biased, but I think it's pretty cute. The main fabric is Denyse Schmidt, one of my favorites, and then I added some light blue polka dots and white ric rac for extra pizzaz. 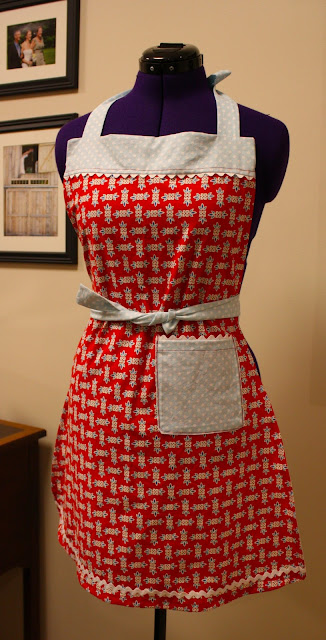 Every apron needs a pocket. What do people keep in apron pockets anyways? Extra flour? A pinch of sugar? A wooden spoon? I just added a pocket because I think they look cute. 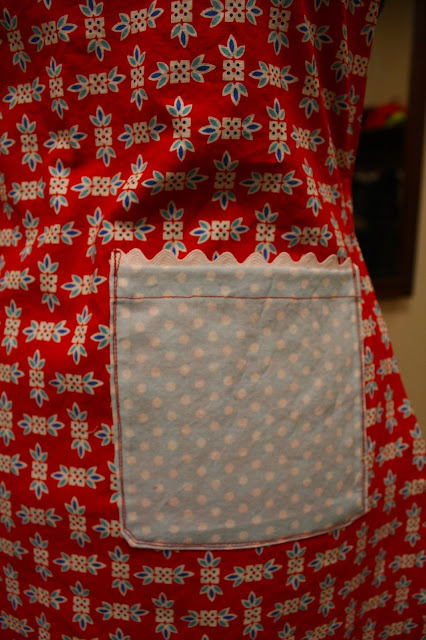 I want to start expanding my repertoire in terms of the top of the aprons I make. I'm getting better at the finishing, but would like to try something else. 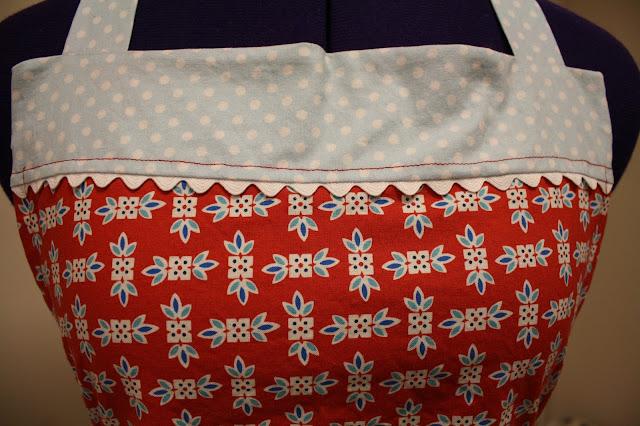 The hardest part about adding the tags is remembering to actually add it. 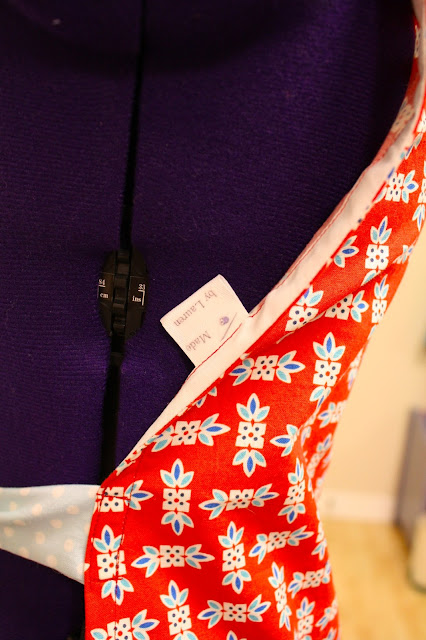 I think she likes it. 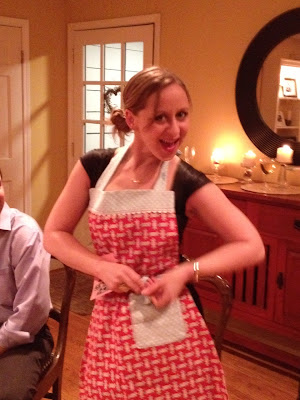 Okay. That's all. More tomorrow about where I was when I couldn't be at the bridal shower.

Lauren
Posted by Lauren at 7:57 PM No comments: