Summer is fast coming to an end, and one of my bucket list items was to sew a pair of shorts for myself. No better time than the present right?! The pattern for these City Gym Shorts was free, and I had the perfect voile-ish fabric that I bought ages ago. I also had enough of it that if I messed up the first time I could try again.

I did not however have enough double fold bias tape, only single fold bias tape. It worked out alright though, the tape is just thinner than the other ones I've seen. I could have made my own bias tape but that just sounds terrible, so I didn't. 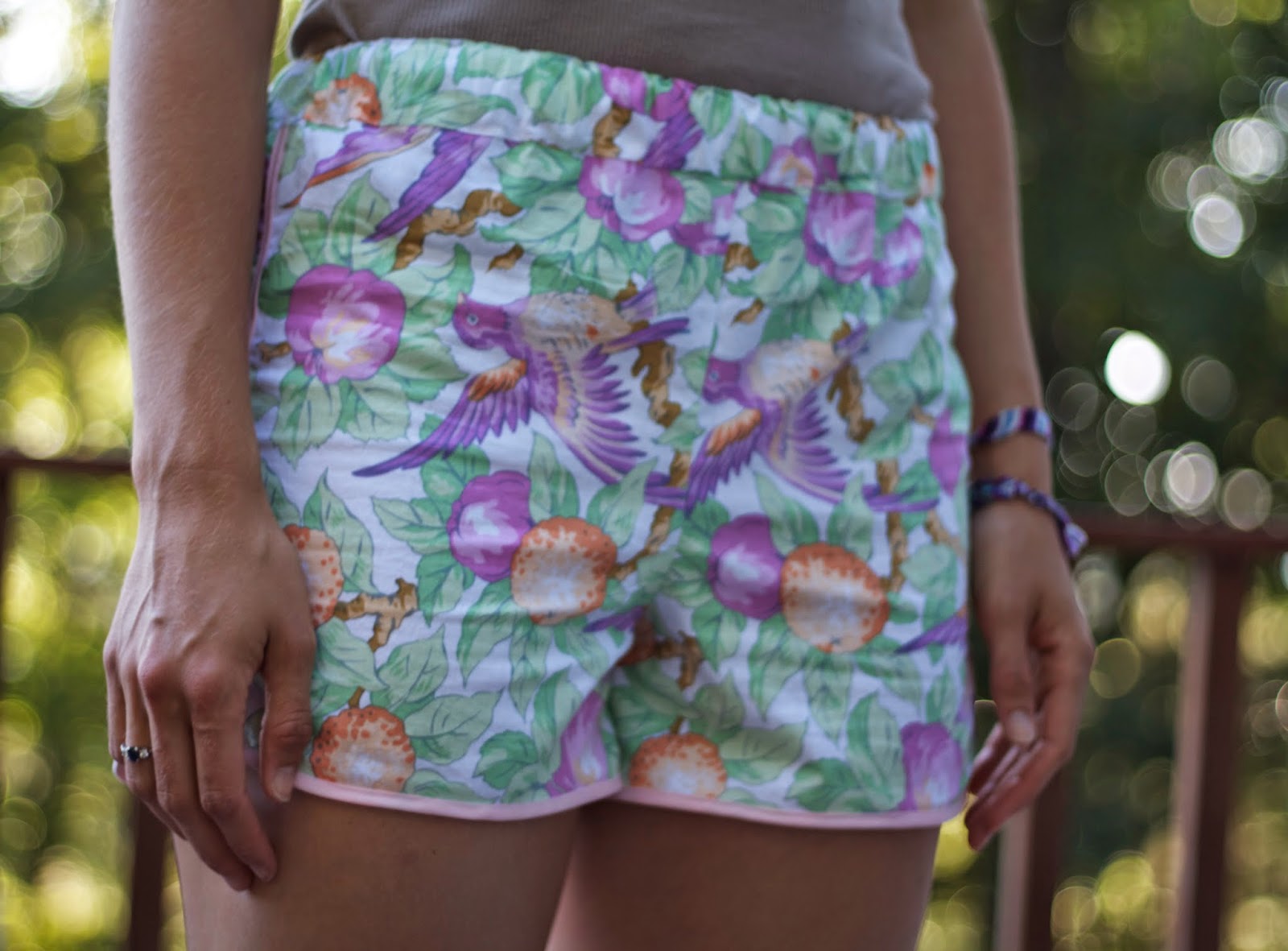 They were super easy to make and took me only two episodes of the trashy TV show I've been binge watching lately. 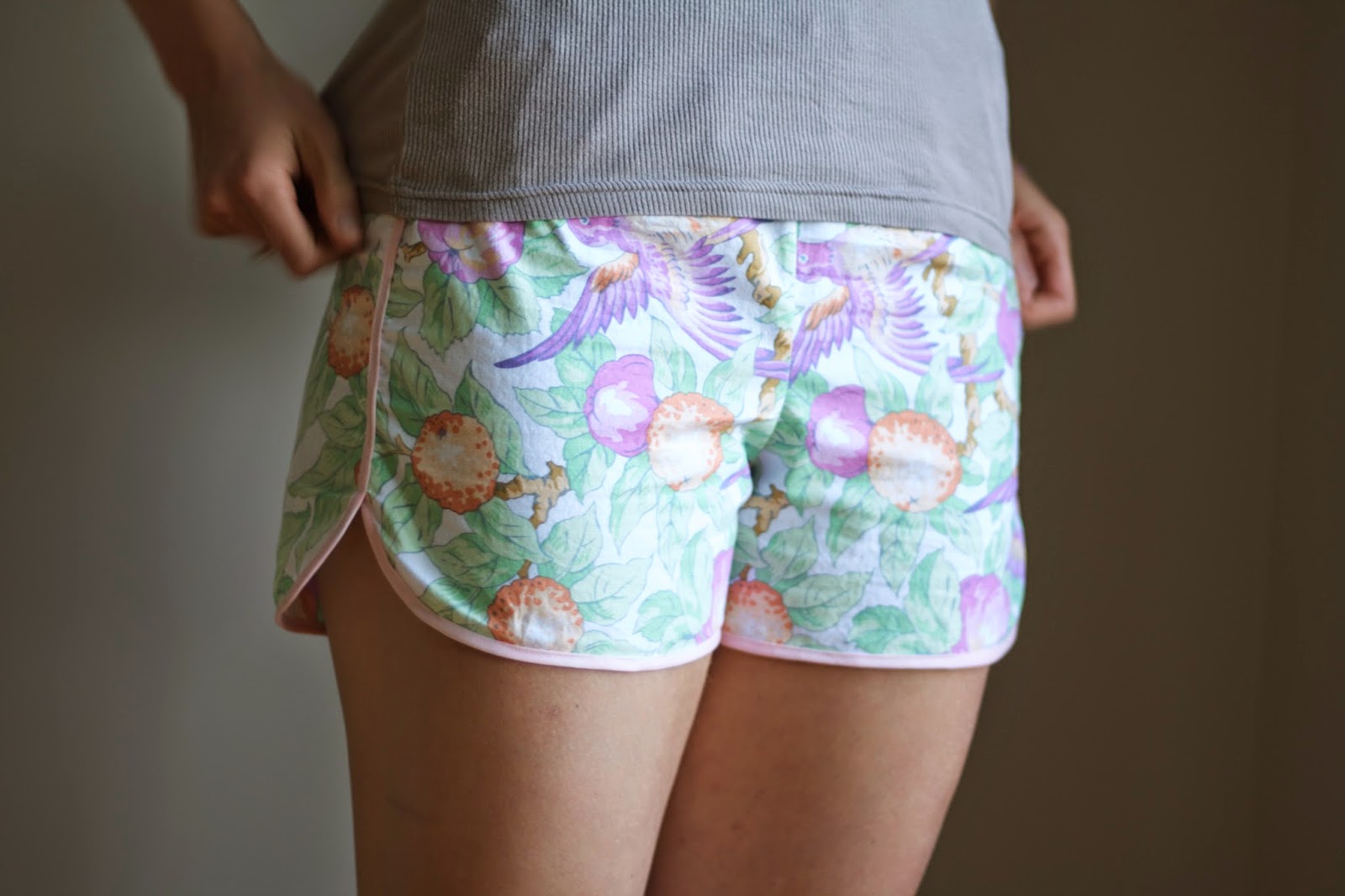 The shorts are a little baggy in the front, and a little tight in the butt. I am also not sure if I feel comfortable wearing them out in public a whole lot or if I'll just wear them around the house and as P.J. bottoms. I did wear them to Rite Aid this evening, but I can't tell if I was embarrassed to be seen because of the shorts or because I was unfortunately wearing a plaid shirt with the shorts. In my defense I didn't think I would be leaving the comfort of the car on our quick errand to get S'mores fixings.

My only other complain is now that I look at pictures I realize the birds are upside down on the fabric. I really need to learn to take the print into consideration when cutting out patterns.

Off to tackle more items on my bucket list.

Vacation: Things We Did

Our vacation was very fun. Charlie and I seriously made use of the term "killing two birds with one stone." Except we didn't kill any birds.

First we went to Seattle and spent time touring with Charlie's friend Steve. 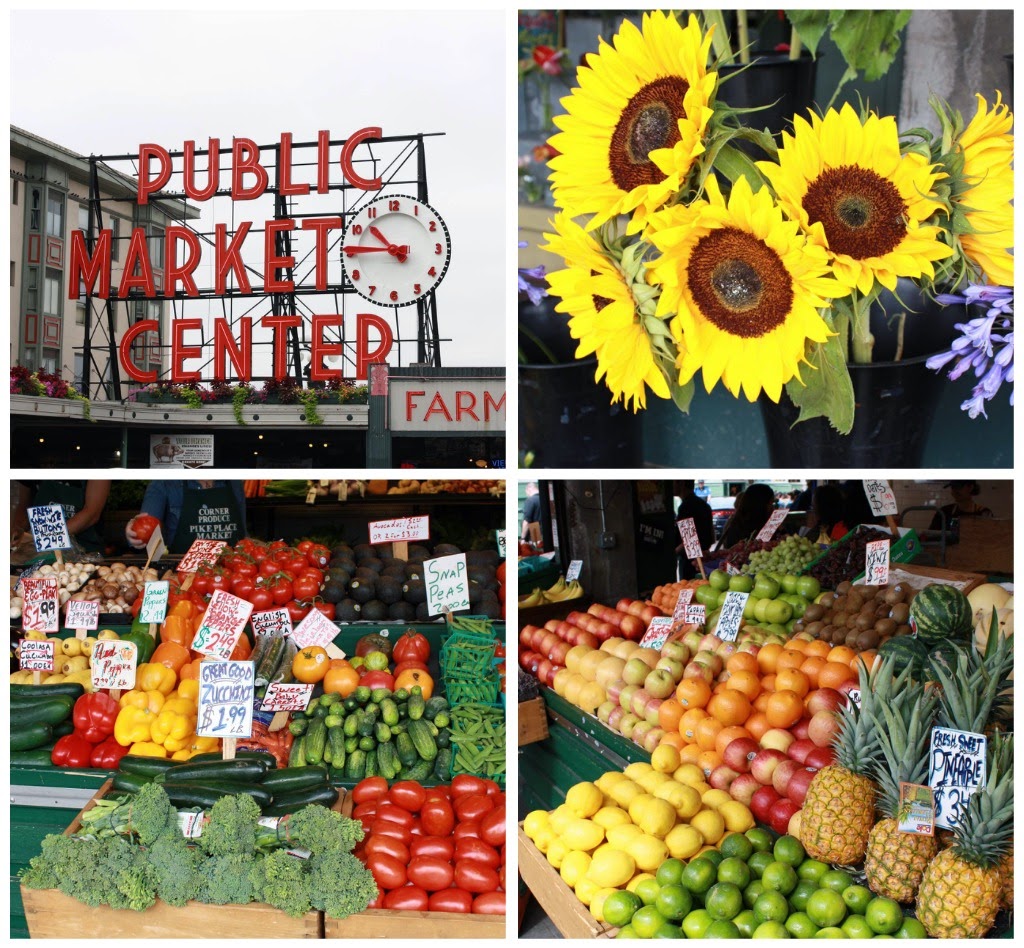 We went to Pike's Place Market, pretty typical tourist place. Being there with two men wasn't the greatest time as they do not like shopping, they ate crumpets while I walked around. 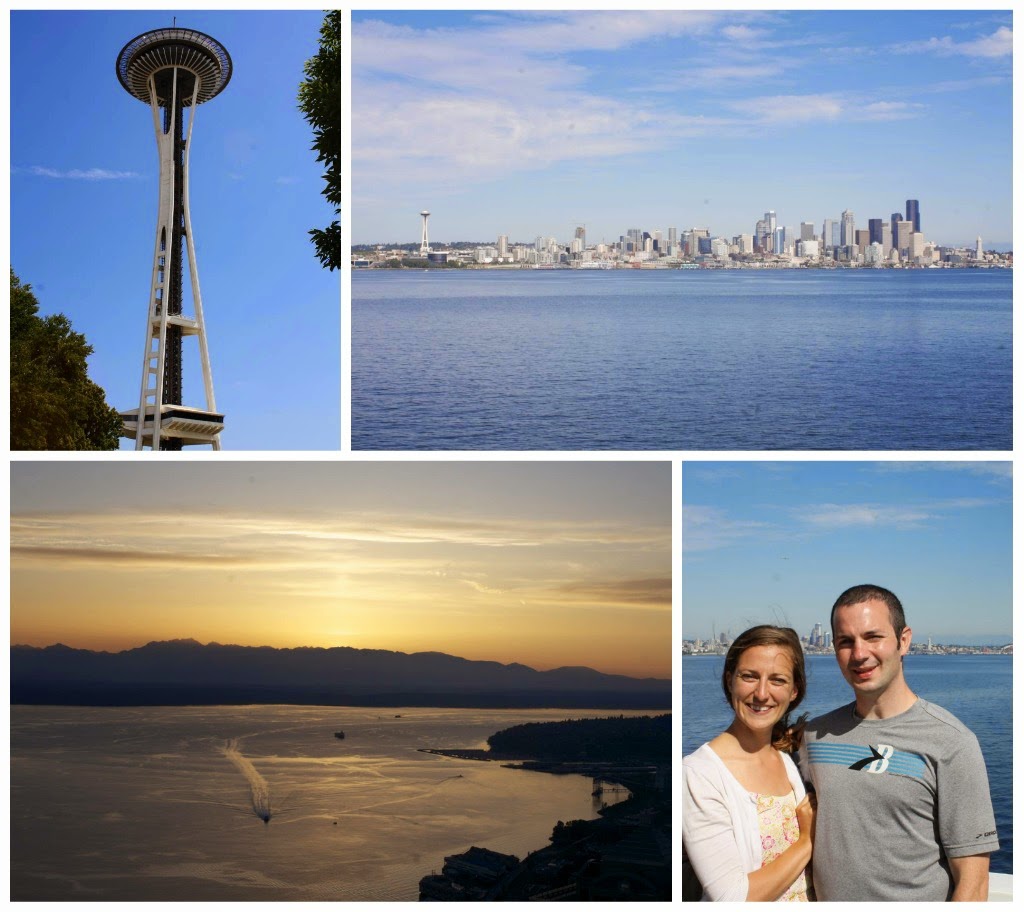 Then we went to the EMP museum which had the most random assortment of things. Famous buildings made from Legos, a guitar tower, horror movie memorabilia, and exhibits on Jimi Hendrix and Kurt Cobain. From there we walked past the Space Needle. We didn't go in it so I can't full out say "it's a waste of money, don't do it" because I didn't experience it, but there was a long wait, it cost $30 per person, and it wasn't even that tall compared to the other buildings, so I didn't feel like I missed something spectacular. We did ride the monorail, which apparently annoys every person who lives in Seattle. My favorite part of Seattle was taking a ferry to Bainbridge Island. The views were great and Bainbridge was a really cute town. It was kind of like a lot of quaint New England towns so I can see why people from the city would like going there. We ate at a vegan stir fry restaurant, we didn't even realize it was vegan until we were done ordering, and it tasted great. Then we met up with Steve's girlfriend and she took us to the top of the Columbia Tower, which is that tallest building in the city. We watched the sunset over the Olympic Mountains. That view was spectacular which is why I think you should skip the Space Needle and go to the Columbia Tower if you're in Seattle. For dinner we got take out from a place called Paseo which was delicious, they have the second highest rating on Yelp. 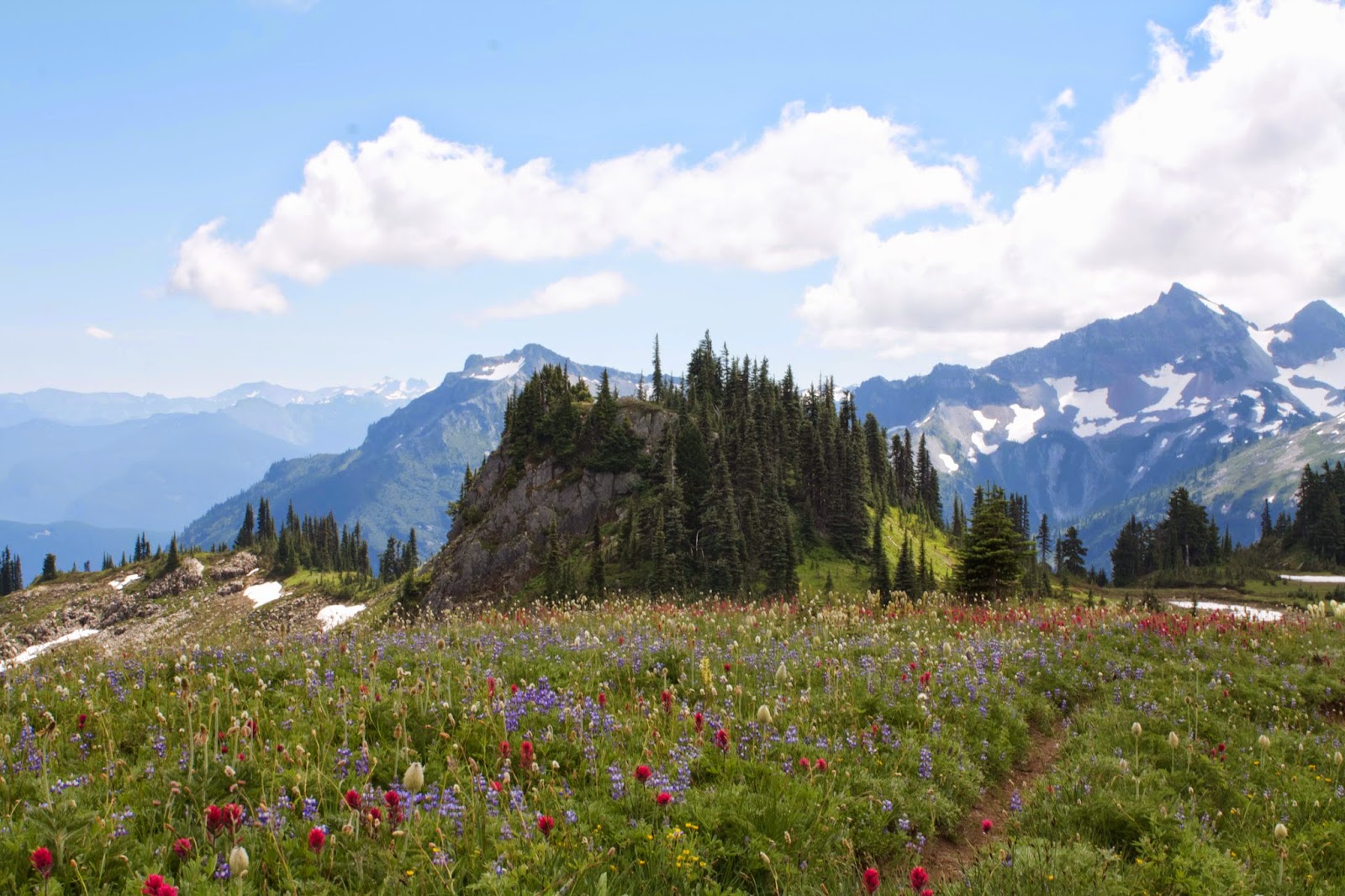 After Seattle we went to the Tacoma area to visit my friend Lorelei and her cute as can be baby. We went to Stellacoom to a cute restaurant called Topsides. We went there last year too so it was fun to go back. Such a cute little area. Charlie, Lorelei and I did some runs around the base she lives on. It was nice to do some flat running for a change. We also went to Mount Rainier National Park. The wildflowers were in bloom and it was so pretty. Some of the trail we hiked on still had snow covering them.  Charlie was a sport and carried the baby on his back and complained only minimally. He doesn't really interact much with babies, but since were were there for almost 3 days he got comfortable with her and even picked her up. I was stunned. Seeing the difference from when I first met her a year ago to now was really fun. 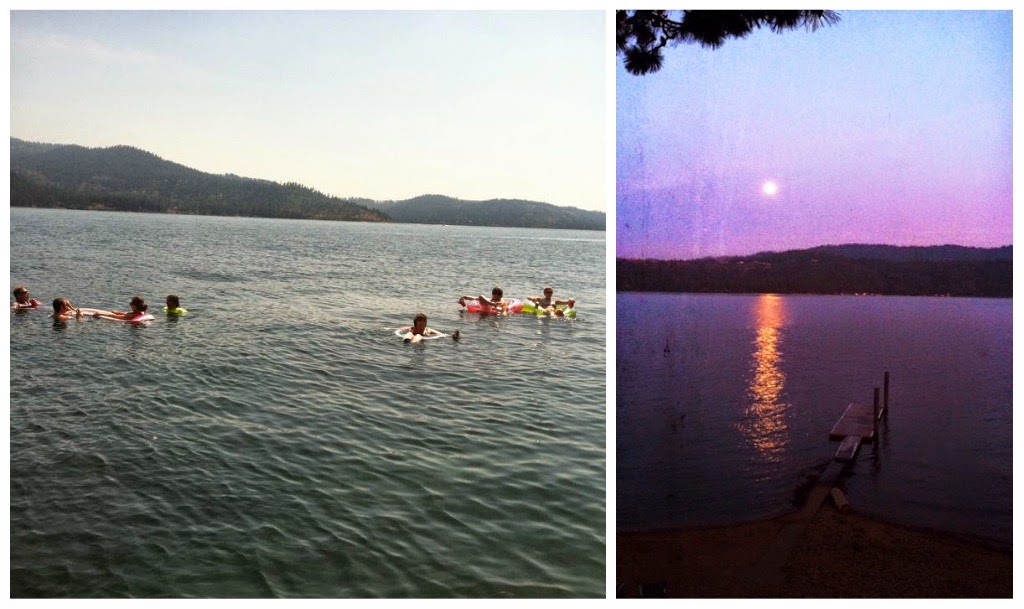 From Tacoma we drove to Spokane for a family reunion with Charlie's mom's side of the family. It was a three day event but I feel like I ate like it was a six day event. The food was delicious. I ate at least a pound of peanut brittle. Day one was in Spokane, day two (pictured) we spent at Coeur D'Alene Lake in Idaho. We floated on the lake, ate like kings, took a hilarious pontoon boat ride (we took on water) and watched the full moon rise over the lake.  Day three was spent eating brunch and being too full to move. 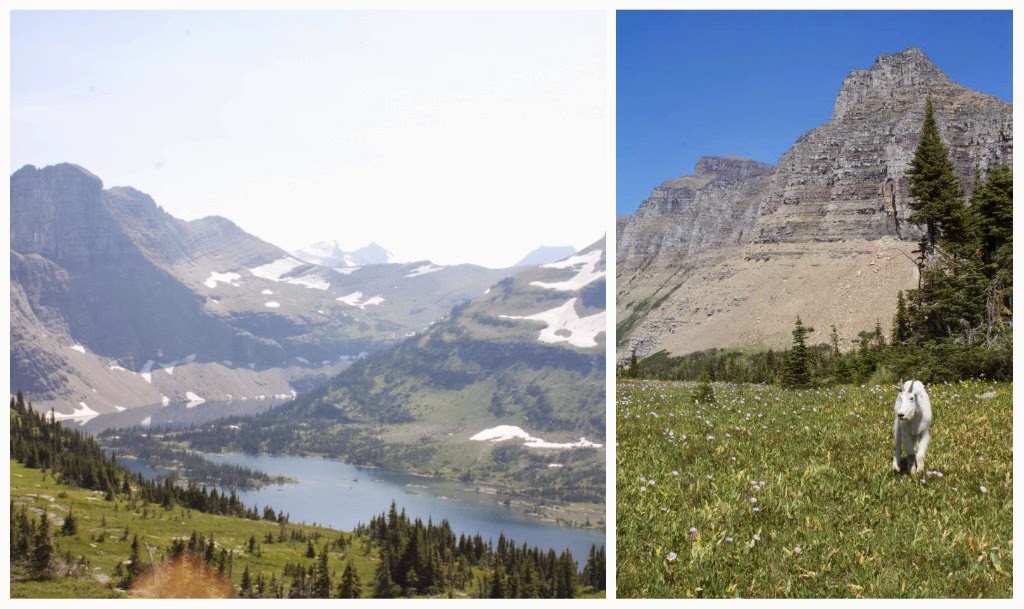 The last part of our trip was to Glacier National Park in Montana. Charlie's sister Danielle joined us, and provided comic relief in tense situations. We drove on the Going To The Sun Road and couldn't find a parking space for the life of us so we continued to Rising Sun where I had the best salad dressing ever. Huckleberries are apparently huge in Montana and the huckleberry vinaigrette was "lick your plate delicious". Then we went back to Logan's pass and had to park down the road to get a spot, but at least there was a spot. From there we hiked on the Hidden Lake trail. We saw tons of mountain goats, lots of little waterfalls, and glaciers. We were only able to spend one day in the park, I'd recommend spending more, but the time we did spend was great.

I had such a great time, friends, family, and sights; couldn't ask for more. I am thankful to Charlie for doing all of the driving. We listened to all the songs on my iphone three times, plus lots of radio time, when you could get a station. I'm also thankful to our great friends and family for showing us a great time, feeding us, and letting us spend the night(s). Out of our 13 day trip we slept in 12 different beds! Writing that makes me glad to be home.

We're back from our vacation! It was such a great trip, friends, family, hiking, mountains, waterfalls, goats! I am glad to be home though. My "garden" was not really growing at a rapid speed before we left so I thought it would be silly to pay someone to come water it, plus I figured, it's New England and it rains all the time here. The only day it rained while we were gone was the day we came home though. Oops. Nothing appears to be dead. I do have some plants that are doing well, some that are okay, and some that are straight up duds. Perhaps if you have any knowledge of how to grow these plants better (at all) you could help me out. 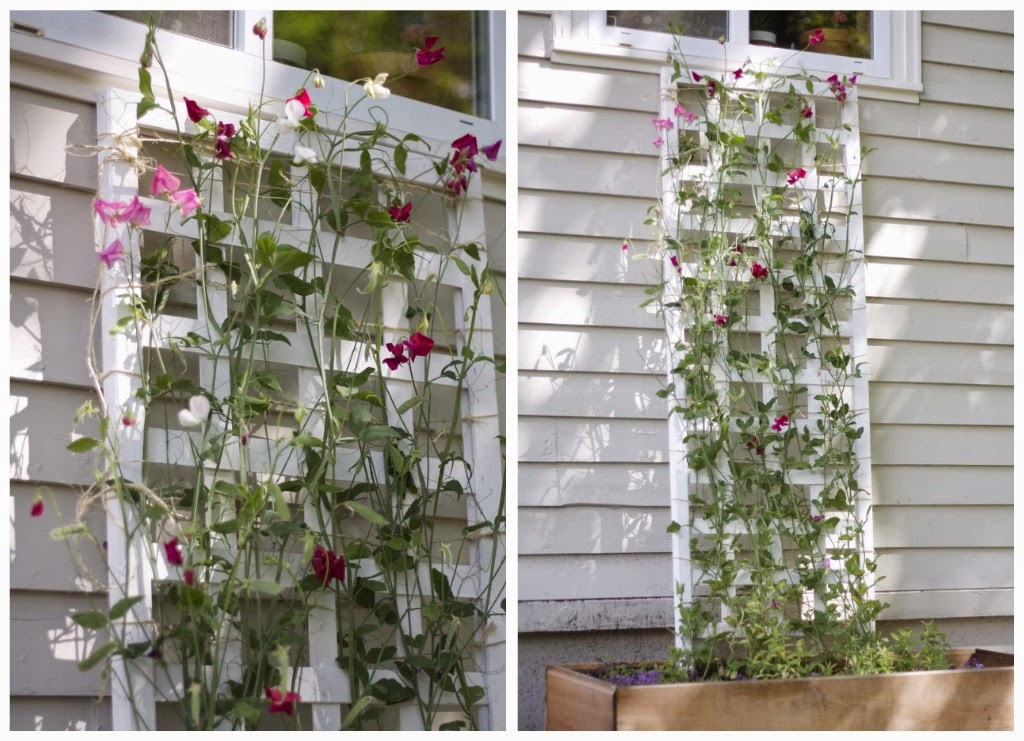 The sweet pea plants are doing great. I swear they grow two inches over night. I have to keep training them so they'll grow up the trellis. They smell heavenly. Can't complain about this plant. 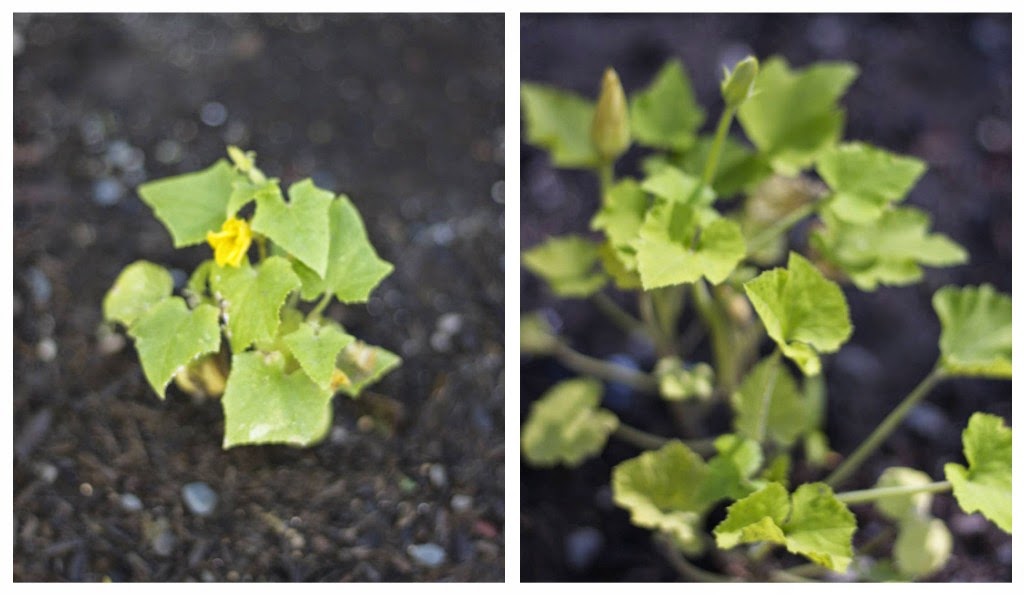 I can however complain about the zucchini and cucumber plants. I planted the seeds directly in the soil, they grew to about the size of my hand, or two hands, and have not grown a bit since late June. Both have a few flowers but nothing else. Charlie thinks it's the soils fault and that we need compost to make them grow. I've fertilized them, probably more than I should. I've also been told they might not be getting enough sun. Ideas, thoughts or general musing are welcomed. 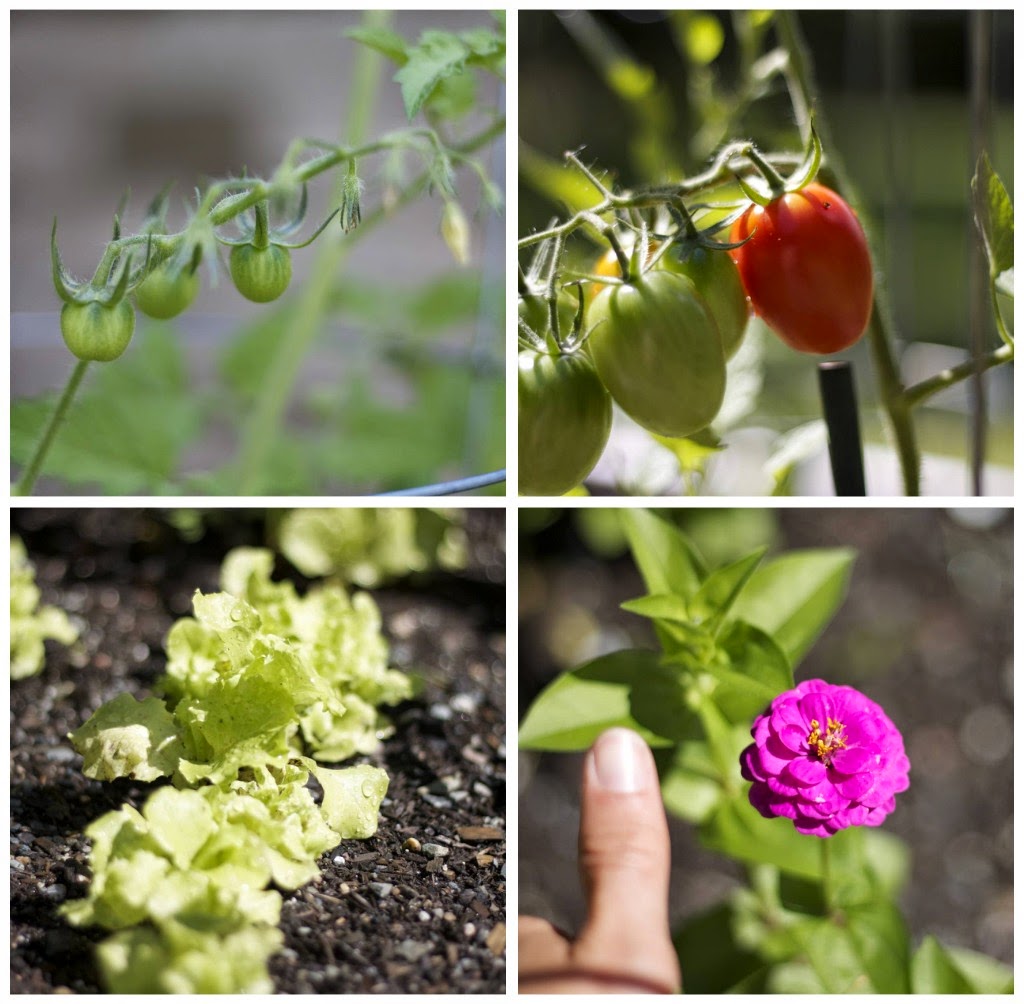 I planted about 20 tomato seeds in my mimi greenhouse, then ended up picking the best six and planted them in the garden. Then they seemed to have died, so I bought four more from the store and planted them, and let the two that looked least dead try to make a come back. They are finally producing, although most of the tomatoes are still green. There was one ready when we got home yesterday. Of my two original plants only one grew. It's the tallest of them all and slowly it has started to flower and have little tomatoes. Last year my tomato plants were producing by July. Perhaps again due to not enough sun or poor soil. The lettuce looks okay. A bit small, but it tastes delicious. I also planted zinnias, which all grew, but are miniature. The one pictured is the biggest/fullest of them all. They are very cute, but not really much to make an arrangement out of.

Some plants were just too ugly to photograph. My spinach looks like mini weeds, not like spinach. The peas are scrawny. I won't be planting them again since you need a lot to get enough peas to actually eat as a meal. The peppers follow almost the same story line as the tomatoes; planted from seed, grew, transplanted, died, bought new ones, except after buying the new ones from the store they also slowly died. Of four plants I have one pepper.

As I said any suggestions are welcome. Luckily there is a good farm stand 3 miles away.

Sewing stuff for babies is fun, but oh man sewing for little kids is so much more fun. My best friends
"baby" turned one recently, so I made her a little Baby Doll Basket.  I knew she was going to get an Bitty Doll for her birthday so when Dana published this pattern last Fall I knew I wanted to make this for her. It even comes in a size just for Bitty Baby. 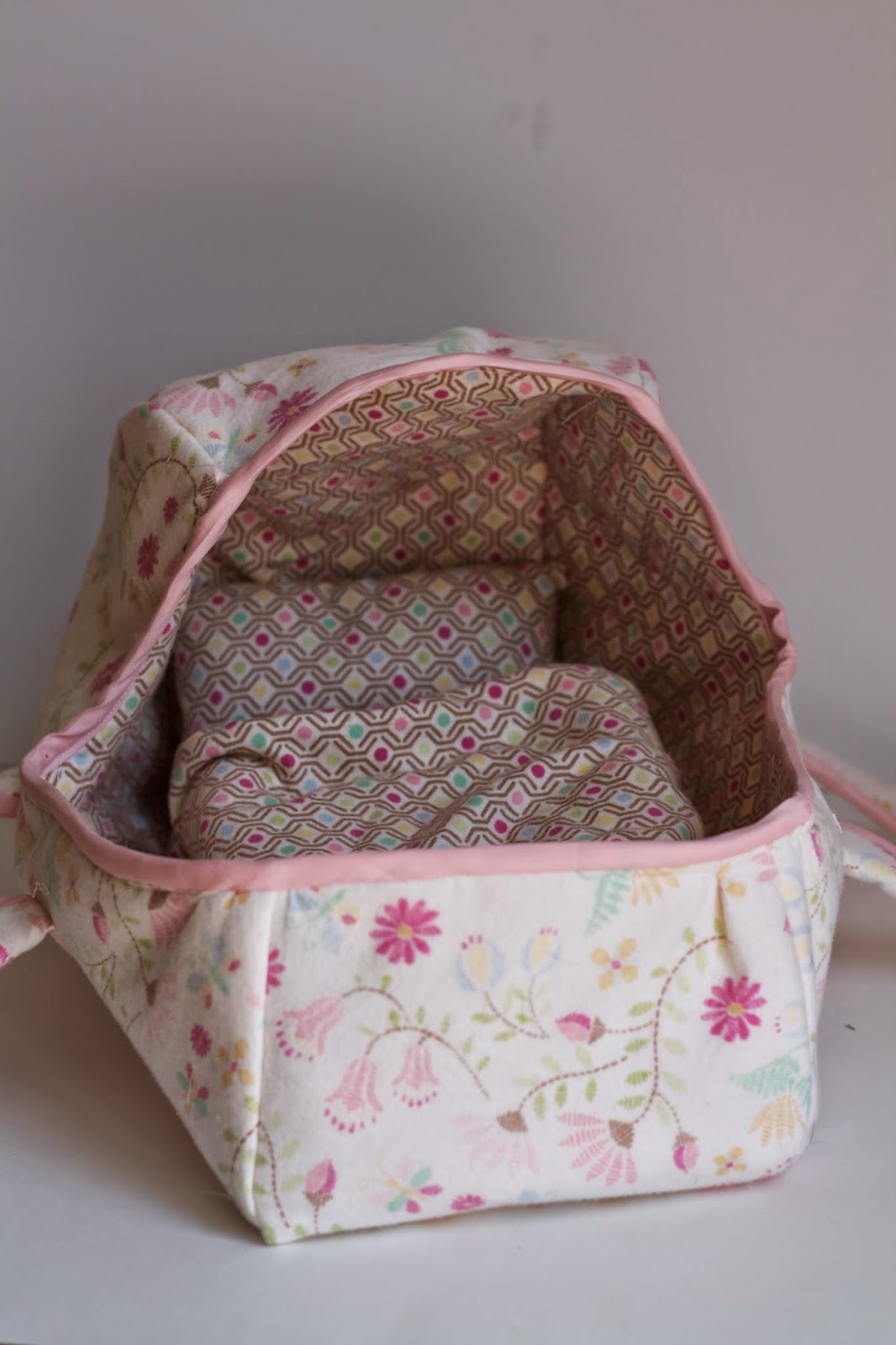 The pattern was super easy to make and came together quickly (only 2 hours of Friends episodes). The part that took the longest was cutting out all of the pieces, which took the length of watching Pocahontas (with breaks to sing). 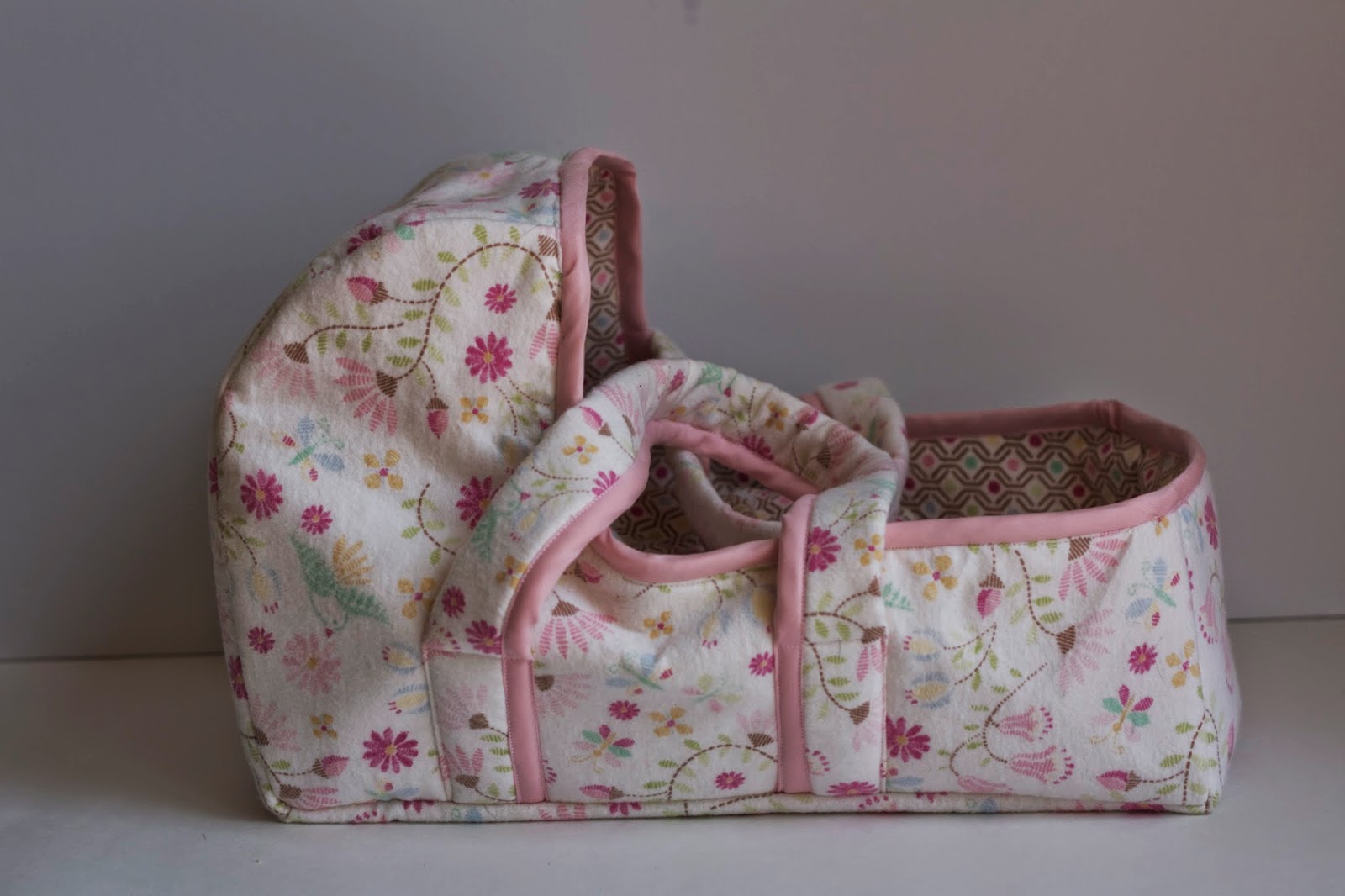 I used two flannels, and a stiff interfacing but it's still soft and cuddly. 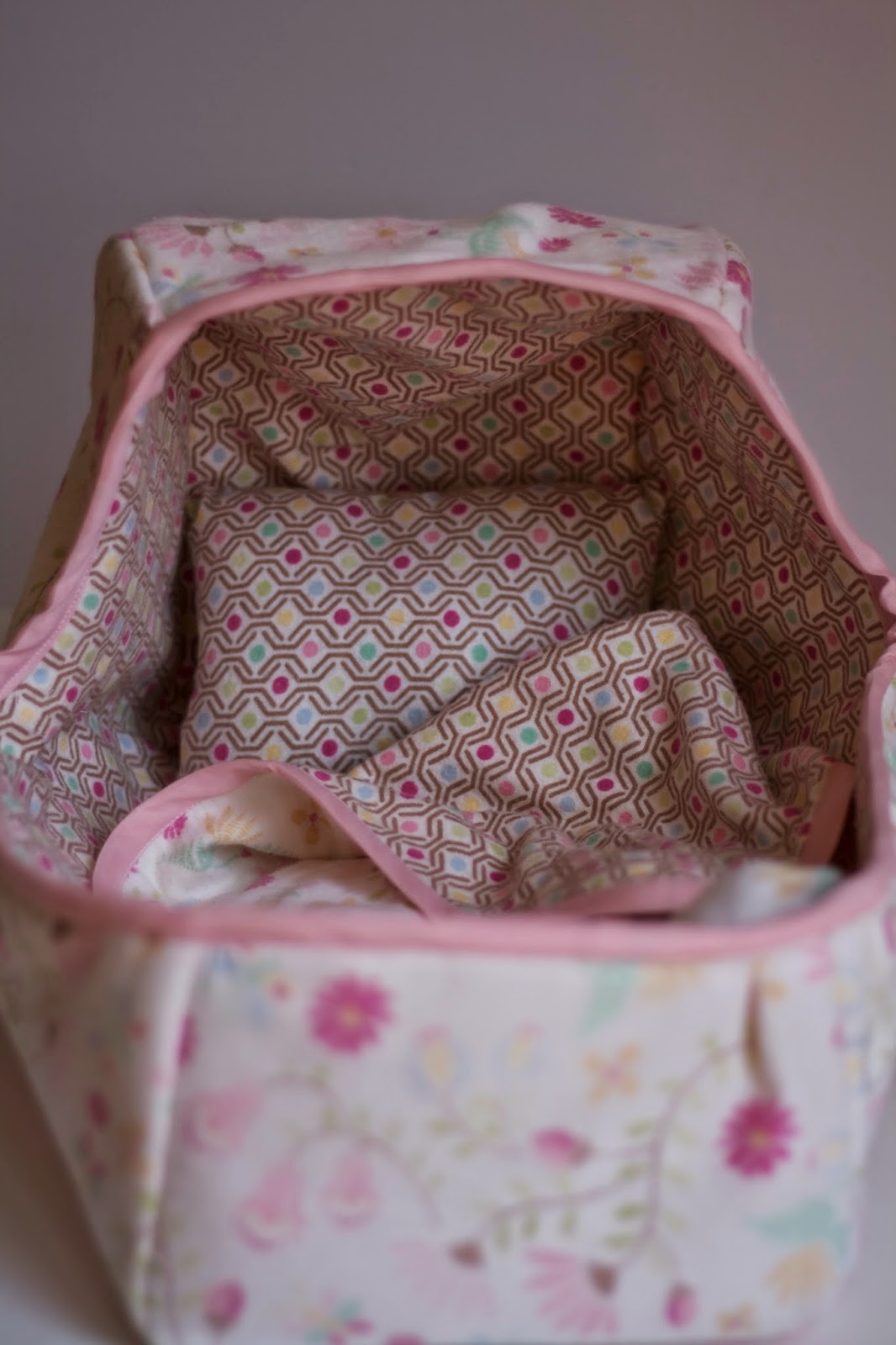 It was a fun project to make. We just visited with the "baby" and gave it to her. She's just starting to walk so carrying a baby around is a bit tricky but I think she'll like it and use it soon.