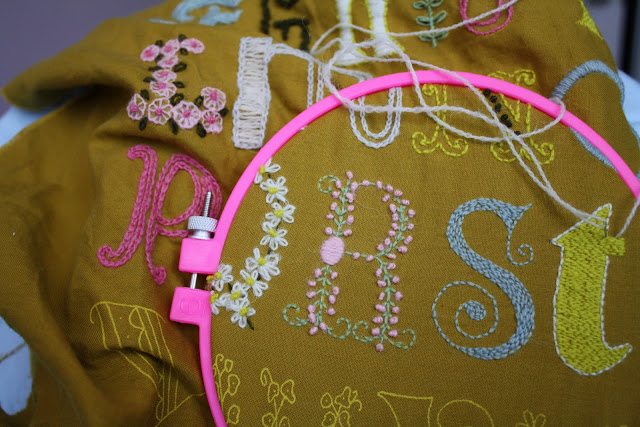 I knew back in May when I saw it that I absolutely had to have this embroidery kit, so I bought it. It came shortly before our wedding and I opened the package, admired it, then set it aside. After the wedding I got to work. I like to do projects like this one when there are people around and I can work while talking. I also don't mind working on embroidery while watching a TV show or a movie. This embroidery was a saving grace while we were on Cape Cod during a pretty bad spell of weather over the summer. I also like that it isn't hard to get back into. I can pick it up after not working on it for 2 weeks and fall right back into the rhythm. I've never worked with crewel wool before, it takes a bit of getting used to. I like that it is fuller than embroidery floss, and feels nicer, it is a pain to thread through a needle and also can stretch out if you pull it too hard. 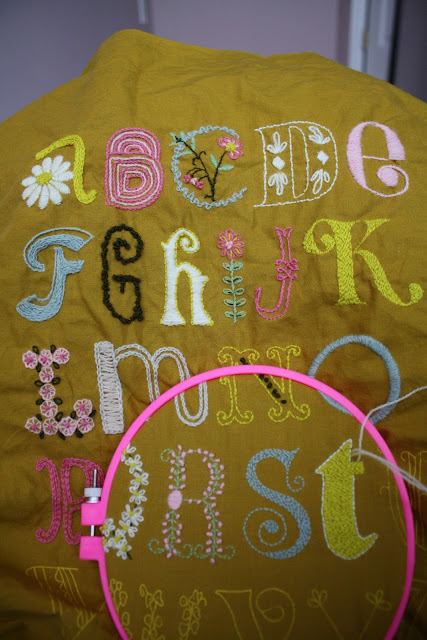 I am making slow but steady progress and wanted to share something since I've been pretty absent lately. I am a bit uptight and can't go out of order, only 6 letters left to go.

Are you working on anything special?

Lauren
Posted by Lauren at 6:13 PM No comments:

Welp, I thought that if I updated my blog I would post more. Let's hope so.

Since the only new pictures I have of anything recently crafty that I've done are from the wedding I just decided to make a whole new header of wedding photos. For some reason I was a bit busy on the wedding day which means all of these photos are from my friend Jaclyn. Thanks Jac!

In other changes news, the first week of school went well. As predicted I dragged my feet and complained non-stop for a week about the start of school and then once I got there it wasn't so bad. I am having trouble getting used to being called Mrs. Therriault though.

Charlie has started student teaching and another huge change has been that we now get up at the same time in the morning and must share a bathroom.

I've joined Pintrest. It's pretty snazzy and easy to use. No more copied pictures hanging out on my desktop to confuse me. If I had joined this site before our wedding I would have either been way more organized, or way more stressed out because I would have had 10,000 ideas instead of 7,000 ideas.

We are going to New Jersey this weekend for another wedding. This will be the 5th one this summer. One might think that I would be sick of weddings but I am not, especially now that I know how much effort goes into planning one. Can't wait for Jay and Meera's big day! Then I will have another sister-in-law.

I think the biggest change around here will come in October when we don't have plans every weekend and can do some more projects around out apartment.


Off to New Jersey!

Lauren
Posted by Lauren at 10:55 AM No comments:

Last week I noticed that my Bonsai Bag was looking a bit sad and dirty and just plain faded. (I suppose using it for a year straight will do that.) I figured I wouldn't have time to sew a new one though with school starting back up again and two more weddings to go to. Then! Hurricane Irene came along. Luckily our power did not go out, nor our roof blow off, and the first day of school was canceled due to the storm. So, stuck at home with no where to go, I started looking for tutorials and patterns for another purse. Low and behold I found a pattern in my drawer that I borrowed from a friend. Simplicity Pattern 2396 and sewed a new purse in the time it took Hurricane Irene to dump 9 inches of rain on us. I thought I should name the purse after her. Here it is, the Irene Purse: 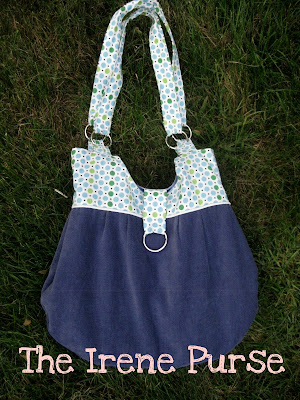 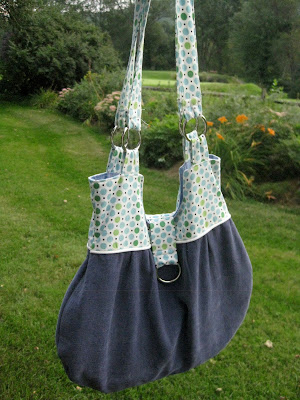 Don't blow away purse! I used the pattern for the pieces and then pretty much disregarded the rest of it and added details that I like to make it more personalized. 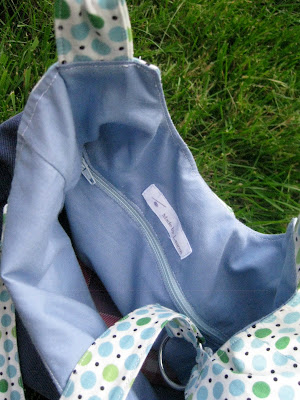 Here is the inside. The pattern says to just put a pocket but I made a zippered one to hold my phone and flash drive, which would go missing for days, or be scratched irrevocably if left to fend for themselves with the other inhabitants of my purse.  On another note the pattern says to make the inside just like the outside of the purse, meaning you would have to cut 4 pieces of fabric for the lining and also pin and gather it. I ignored this and just traced the outside section once it was sewn together onto the lining fabric and cut it that way. Much easier in my opinion. 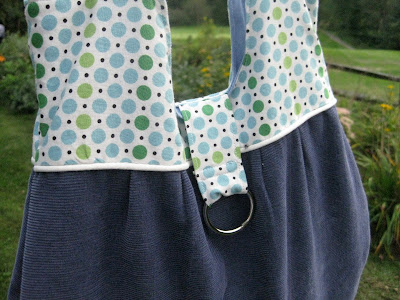 The pattern also said to add a magnetic snap to close the purse but I didn't have any at home and I couldn't very well drive 30 minutes to Joann's in the middle of a hurricane so I added this flop over thing. I think it looks cute and keeps the bag closed. 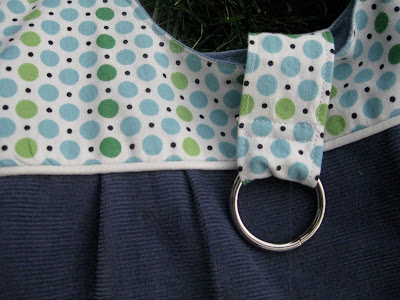 Piping is the best. 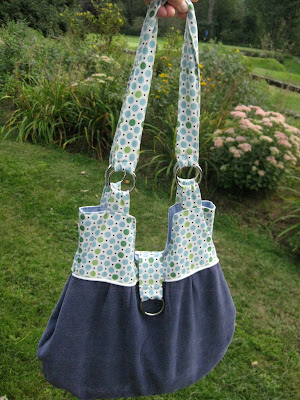 The pattern also said to sew the straps into the purse but I added these metal loops because I think it makes it look fancier. I just wish I had made the purse straps a bit thicker, they aren't very sturdy with only one layer of interfacing. 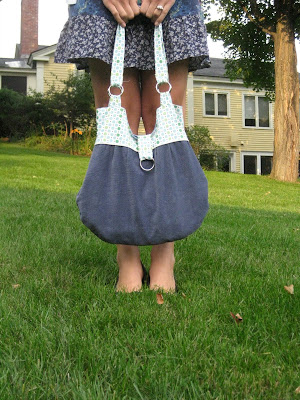 I had this whole snazzy idea for a photo shoot but Charlie got annoyed when I kept asking him to take more pictures, he just wanted to identify trees in the yard, figures. This is the best one. 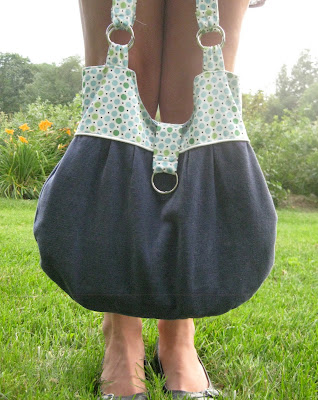 Not exactly what I was going for. But you get the idea.

I'm going to enter it in the Purse Week Contest.