So since we decided we're not moving, and we're not looking for apartments or houses, or campers (yeah, we ventured down that road for a few days), I've embraced a "there's no time like the present" attitude. This basically means that projects I've been putting off "until we move" have taken priority. Projects like painting and re-doing furniture have been put off because I wanted to wait until we had a room to put them in, or a garage to paint in. On Sunday after Charlie and I finally agreed to stop the house hunting shenanigans, I woke up, took 5 steps to my dresser, took out the drawers, dumped my clothes on the floor, dragged it into the utility closet, dragged everything out of the closet, and began sanding/painting. Six hours later I had painted my dresser. 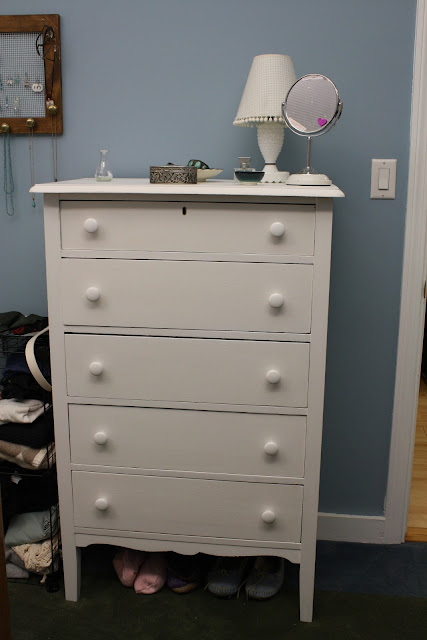 I was in the zone in terms of this projects so I forgot to brush my teeth until 3 PM, and also forgot to take any "before" photos. Here is the only one I was able to find. 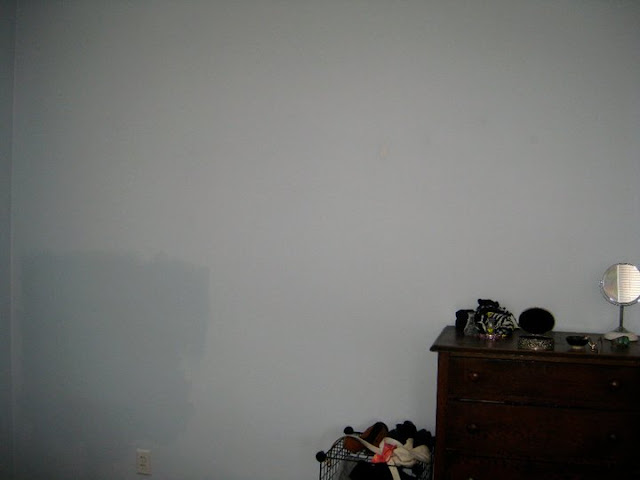 The picture is mostly of the bad patch job on the wall, and the "before" picture for the walls, which we painted two years ago. You can see however that the dresser was a dark stained wood. It was given to me six (SIX?!) years ago by my friends, boyfriends, roommate when he sold me his bed and went into the Army. He said it was built during the war by his grandfather, this guy liked to tell tall tales so I'm not sure I believe him, but it is a good story. I love the dresser, I just didn't love the color, or the fact that the stain was about 100 years old and warped, chipping, just plain yucky. I also didn't like the fact that it took me 100 years to sand the bubbly stain off of the dresser. 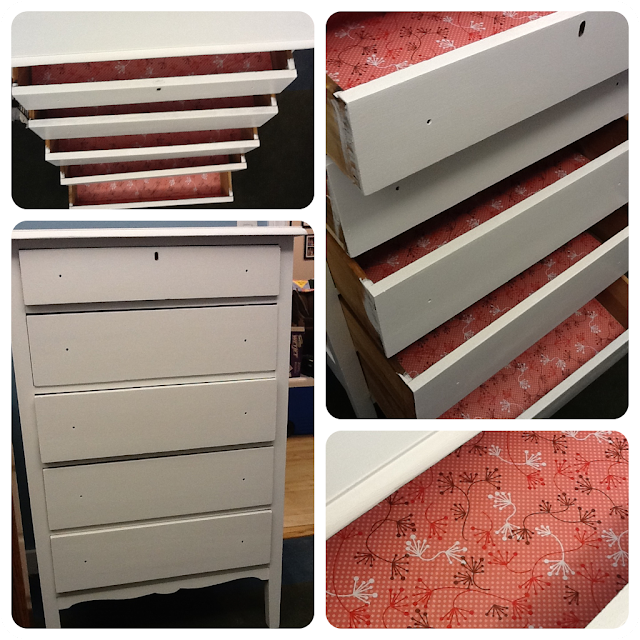 Here's a picture of the process. I even added contact paper to the drawers. My grammy has an affinity for contact paper, I need her to teach me some tricks because there are so many wrinkles in mine. I figured it didn't matter though because they will be filled with clothes.

In the process of this re-do I also sorted through a bunch of my clothes and threw out items I don't wear, or have holes in them. It feels good to get things done, clean, and make a change. Although, looking at the before and after picture I realize that most of the things on top of the dresser in the before picture are still on top in the after picture. The mirror has fewer fortune cookie fortunes stuck to it in the before I guess. 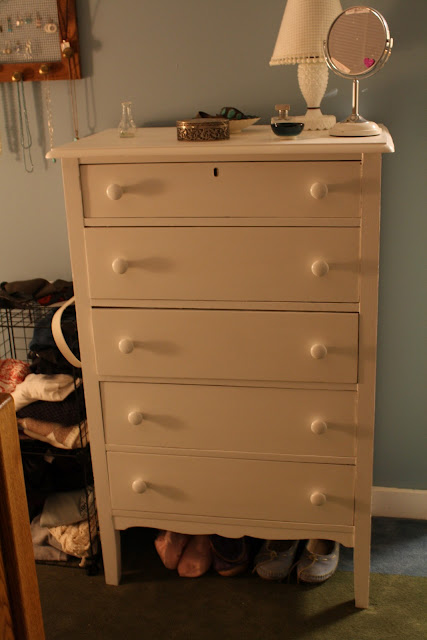 Next up I'd like to re-do the lamps I have in our bedroom. I love them, they're milk glass, I love milk glass, but the shades are very faded. My Mom made them for me seven years ago (seven!?). It would be nice to get rid of the cheep-o Walmart wire shelves I've been keeping my sweaters in for the last six years (six?! Is this getting old?) I tried to convine my Dad to build me something but he said I have to get in line behind my step-mom who wants a table for her new office. Lastly, I'd like to do something different to the top of the dresser because although I sanded for ages and had stain colored dust in my nose, ears and har for 2 days I did not get all the bumps to go away and the top is kind of rough. I was thinking about finding some pretty paper and covering the top but I don't think the paper I have in mind exists. I'll keep you posted. I know you're so interested.