I had great plans to go running this afternoon, come home, make Charlie a card, shower, and even start cooking dinner. Since Penny is not good leash runner we always take her to trails around our area where we can let her run free. When she's on the leash she tugs for you to go faster, then stops to sniff, and prefers to half step you, in other words runs right in front of you ready to trip you at all times. Today I took Penny to one of the easiest places to go, Profile Falls. There are old roads turned into trails and people snowshoe, ski, and snowmobile on the trail so it's pretty packed down and easy (by winter running standards) to run on. We got there, parked, thought about how there didn't used to be snow in the parking lot but now there was, shrugged, then went running. I realize this sounds dumb, at least the park about the snow. It snowed a ton on Friday and Saturday. I took Penny walking on Monday at Profile and there was some snow in the parking area, not a lot. Then I took her running on Tuesday and there was no snow in the parking lot, it had all melted or been plowed away. It hasn't snowed since then so I was a bit surprised to find that the parking lot was covered with snow.

Anyways I didn't think much of it and went for a run. An easy 3.5 miles. Once we got back to the parking lot I actually looked at the car and realized it was stuck in about 8 inches of snow and one side was sunk way into the snow. Penny hopped in the car and I surved my emergency suplies. Here is an inventory of emergency supplies in my car:
None of those supplies were of any help. I attempted to use the windshield scraper to chip away some of the snow and ice but figured that puncturing my tire would only add to my troubles. After many attempts to reverse and drive forward and getting no where, I put Penny on the leash and started walking home. A sensible person might have asked someone for a phone to call someone, but I didn't have anyone to call since I only know Charlie's number and he was at practice 40 minutes away and not with a cell phone,  and my parents phone numbers and they live far away. I could have asked one of the many trucks that passed me for help, but that seemed sketchy. I could have asked for a ride, but who wants to give a ride to a girl and her temperamental dog? Aside from the fact that I would never accept a ride from a stranger anyways. So we just walked.

Since it has snowed there is little to no shoulder on the main road we had to walk on to get home. Penny nearly pulled my shoulder out of the socket dragging me down the road. Lots of drivers gave me looks that seemed to say "What are you doing wearing that, and walking that dog on this busy road?"Every car that drove by I hoped was Charlie on his way home, miraculously a half hour early. Alas he did not pass us. We walked the two miles home. This gave me lots of time to flume about my problem. Would I have to pay someone to tow me out? I don't feel like spending money on that, I'll just wait until spring. Logical reasoning right? By the time we got home I was super peeved and it was nearly dark. Instead of doing all of the things I thought I would do I ate 2 (or 4) Who Nu's. They are not nearly as good as Oreo's but I didn't care.

After snarfing down the cookies and contemplating how I would manage until May without a car Charlie got home from work/practice. I told him the story instead of throwing his hands in the air and joining my pity party he swiftly put his boots back on and we set out to dig/push out the car.

We took turns digging, pushing, and flooring the gas. After about 20 minutes we finally got the car out; only 32 days before spring. 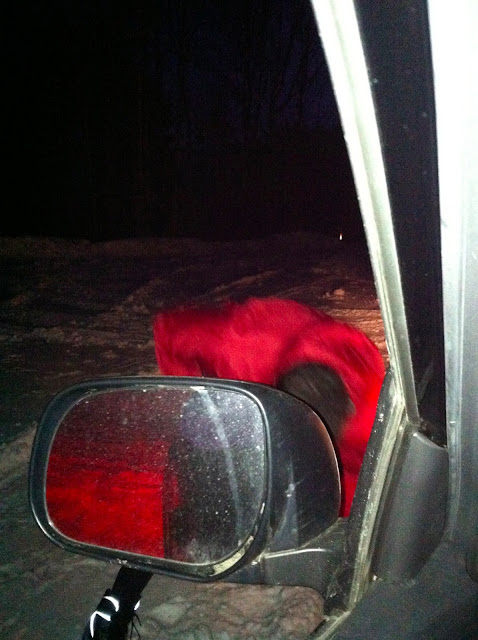 You know you've picked a winner of a husband when he digs your car out of a snowy, dark, cold, parking lot. Once we got safely home I thanked Charlie for his help, and he said "It's the least I could do.....but lets not make this a Valentine's Day tradition okay?"

Hope your Valentine's Day was special, and did not involve shoveling snow with a windshield scraper.