My Claims to Fame

The other day someone asked me about my tote bag. Admittedly it is a bit weird if you don't know me and my family. This lead me to think about all of my claims to "fame" if you will. *warning, this is a very random post* Here goes:

1. I drew a picture of the Statue of Liberty when I was five that was published in Highlights for Kids. I think my Mom has the copy. Even without the title you would still know it was the Statue Of Liberty.

2. I drew a picture about saving the rainforest with my friends in third grade and got to go meet the governor or something. My Dad made it seem like it was a big deal. All I remember is going to Toys R Us after and getting a new bike.

3. I wrote a story in 5th grade that got published in the newspaper. Looking back on it I want to smack myself for being so cliche because it was a scary Halloween story that ended with me waking up from a nightmare.  Lame 5th grade Lauren! Lame!! It still makes me a published author.

4. Two poems I wrote were published in my high school literary magazine. I think I've written about five poems in my entire life. I wonder what that says about my poem writing abilities?

5. Once I had the highest GPA on the Swimming and Diving Team. I might have sucked at diving, but I did not suck at studying a ton. Go me.

Now, on to the more interesting part of this post, my famous relatives:

1. My uncle Doug, and his partner Bryan, own The Big Gay Ice Cream Truck, as well as two Shops in New York City. He might own half of Manhattan but I still pretend to be unimpressed.
He gave me the unicorn bag which started off this random post. My little cousin and I bejeweled it. Flashy isn't it? If you so desire you can order one HERE. It's not bejeweled though. 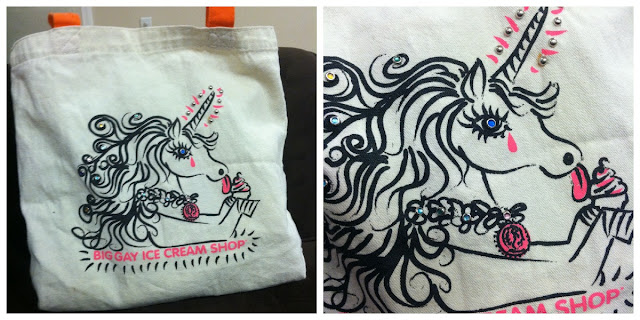 Charlie and I went to the Truck a few summers ago, it was magical. When Charlie's cousin gets married this Spring in Brooklyn we'll be going again, hopefully more than once. I can't wait to eat tons of ice cream. I love soft serve and crazy toppings. 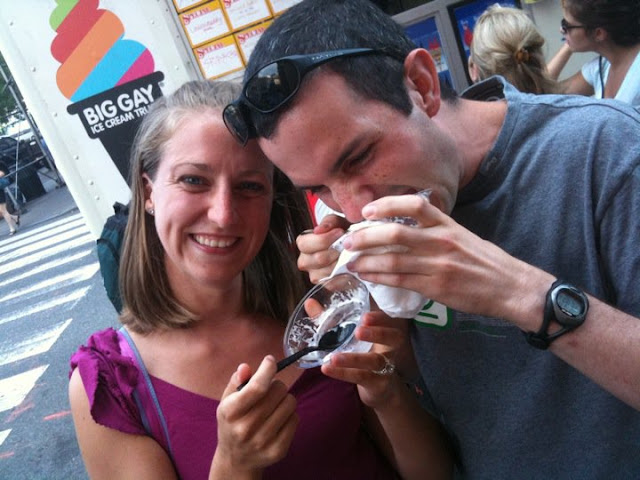 2. My Aunt Val is a famous author. She even has her own Amazon page. She's written tons of books, including some ghost writing gigs. For you non literary folks ghost writing means you write a book but get no credit because some famous person pretends they wrote it. Seems unfair in some respects, and very secretive.  I'll spil the beans, are you ready? Joan Rivers, and Snooki are the ones I know of. There may be more. My two personal favorite books she's written as herself are:

Both books were hilarious and even though there are gross scenes about my Uncle I still 100 percent enjoyed both.

3. My cousin is a beautiful singer and has about 1 million followers on Youtube. She and her friend record songs which give me goosebumps whenever I listen to them. This one is my favorite.


4. My uncle Steve is an actor for Gilbert and Sullivan's in New York. He also has a blog, which I see he hasn't updated since someone in a bug eating contest died. He doesn't actually look like this, at least not most of the time. 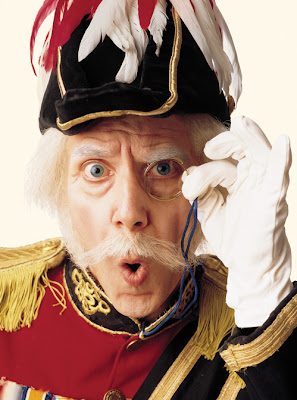 Charlie says that my post just proves that if you live in, or around New York City you must be famous.

5. My Dad is the Fire Chief of the town I grew up in. This has gotten me out of a speeding ticket, and gotten me two jobs. It has taught me nothing about fire safety. He also has a blog.

That's all I can think of. If you are related to me and feel that you have been slighted in this post please let me know so I can right my wrong as quickly as possible.

Are you related to anyone famous?