It's been way too long since I posted. Sorry.  Since I haven't sewed anything, and because my brother in law just commented that he likes reading what I have to say, and since I just ran a race, here is a race recap.

First, two things to do the day before a race are; ride a motorcycle with your brother. He's always too distracted making inappropriate jokes to smile at the camera. 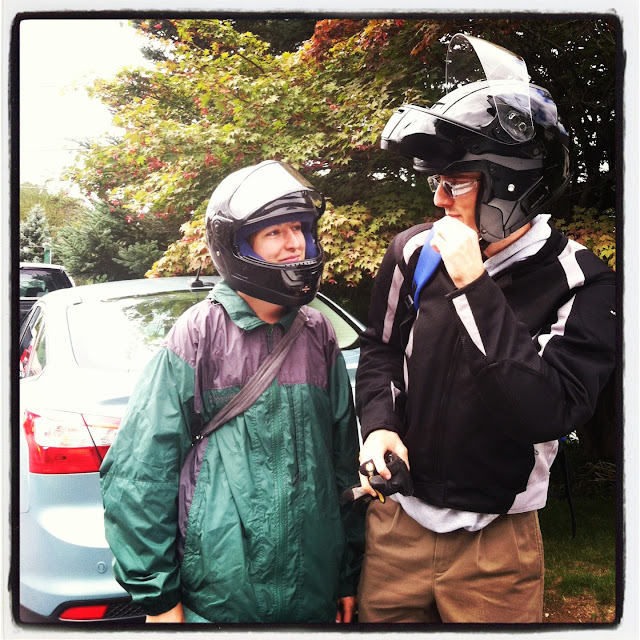 And second, lay on the couch in your PJ's watching Netflix shows on a huge TV and cuddle with your dogs that hate to cuddle. (We've been watching Derek. It's very good but we're only 2 episodes in and I already cry pretty much the entire 23 minutes. {I dare you to watch that trailer and not feel your heart strings being tugged.}) 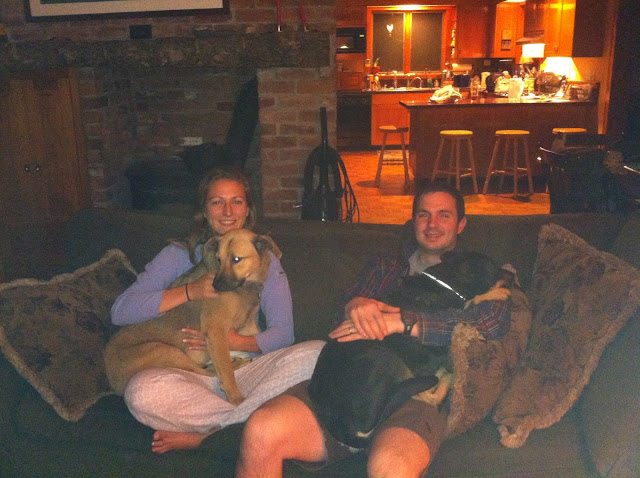 So, to the race. We woke up at 4:30, not because we needed to leave but because the dogs were ready to wrestle outside and swim in the frog pond. We stayed at my dad's so the drive only took us about an hour to get to Pisgah State Park in Winchester NH. We got there and got our bibs. I made a comment to Charlie about our bib numbers being really off, his was 28 and mine was 40; usually we are in sequential order because we register together. He and the registration lady ignored me. Turns out right before the race started Charlie's dad pointed out that the name on his bib was not his. They gave him the wrong one and he was a 60 year old man. He quickly got his bib back.

Two highly traumatizing things happened to me before the race started.  The first was that I wanted to go inside the school to use the bathroom but there was a huge spider on the floor of the entrance (it's body was the size of a quarter, I'm not even joking). Obviously I stood in terror about 8 feet away from it. Then a man walked by, I said "watch out" and he stepped right on the spider and crushed it. Gag. Then almost immediately after turning around to avoid the carnage I saw my running arch nemeses. I must preface this rant by saying that I am not a very hateful person, I don't really hate anyone, EXCEPT THIS GUY. He ran the same race as me 4 year ago and farted on me and I've hated him ever since. He tends to run a lot of the same races that Charlie and I run. He likes trail racing and lives around us. He also runs about the same pace as me (molasses on a cold day). I've run about six or seven races that he's done since the farting incident and I always want to beat him. I can't figure out what it is because I'm really not competitive at all. I seriously would not care if I came in second to last as long as he was behind me. Anyways as soon as I saw him I got real pumped to beat him. I even put on my grouchy strong face. 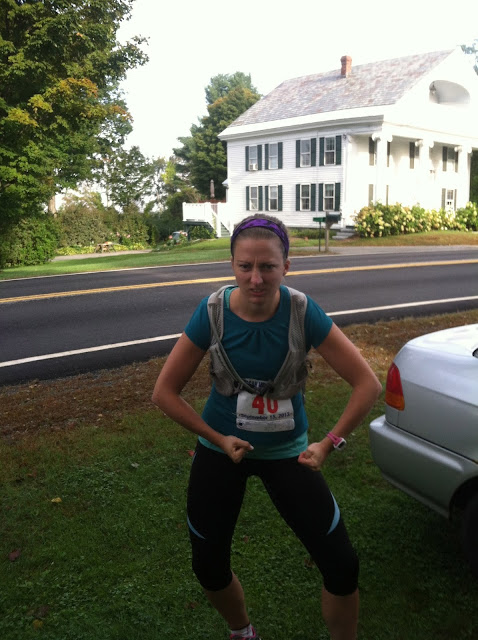 The race started, the weather was beautiful, the trail was wet from the rain but it wasn't too bad. I was right around my enemy for about 2 miles, I'd pass him on the uphills and he'd blow past me on the downhills. Then around mile 2 he was ahead of me and I couldn't see him. I figured that as long as he was that far ahead of me he couldn't fart on me so I let it be and ran at a good pace (for me). 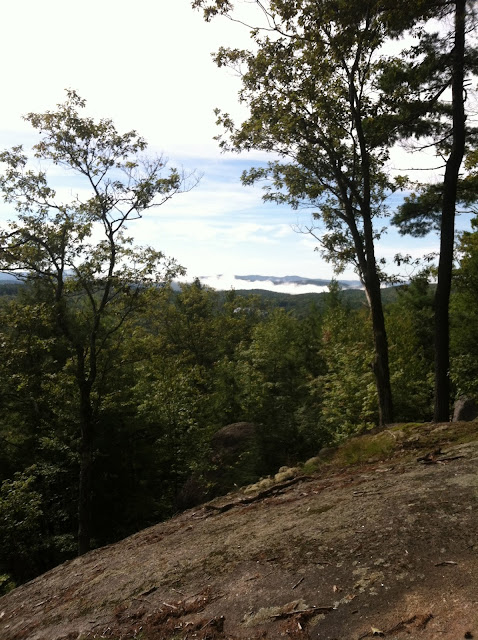 I had to bush whack for part of the race (.02 miles) because there was a huge swarm of bees. Charlie was way ahead of me but got stung by three bees. There were some pretty sweet views. The best part about trail racing is that there are snacks at the water stations. M&M's every few miles, yes please! The second best part is the great views. You could see Mt. Monadnock. 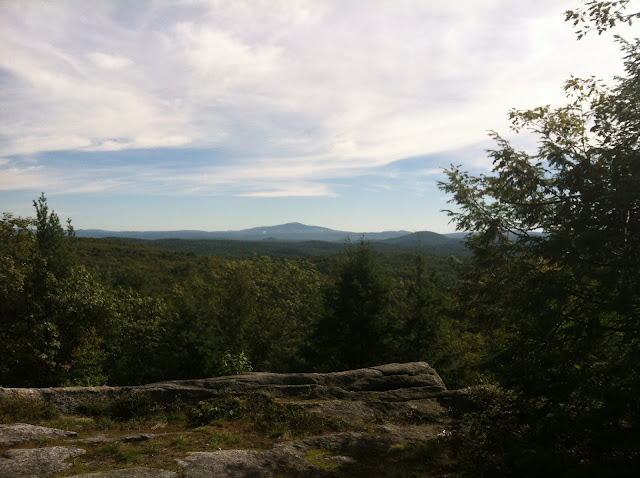 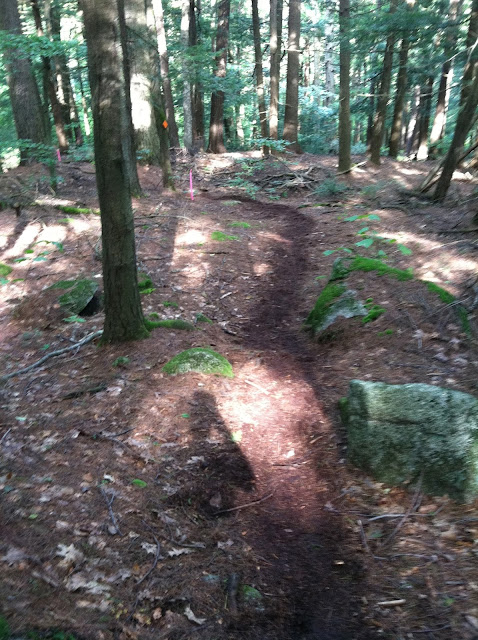 At 2 hours and 40 minutes my GPS watch said I had two miles to go, and I really wanted to finish in under 3 hours so I started going a bit faster, it helped that it was mostly downhill. Right at the turn from the trail to the main road that takes you to the finish line I saw my enemy. I had pretty much decided that I wasn't going to beat him and was just happy not to be farted on, but as soon as I saw him I was filled with rage again and really turned on the speed. Here is the part where I feel bad; I passed him and he was very nice about it, he said "looking good, keep up the good work". Then I felt bad that I was trying to beat him, but maybe that was just his ploy? I didn't want him to catch up to me though so I kept hustling. I finished in about 2 hours and 54 minutes, and beat my enemy. The funny thing is I don't hate him once I've beaten him. I was even nice and clapped for him as he finished. I wonder if there are any studies on competitive hatred. It really makes me feel like a bad person but I can't help it. Here we are at the finish line. I ate a hotdog and two cookies and they were all so good I don't even care that I used to be a vegetarian and said I would never eat hotdog again. 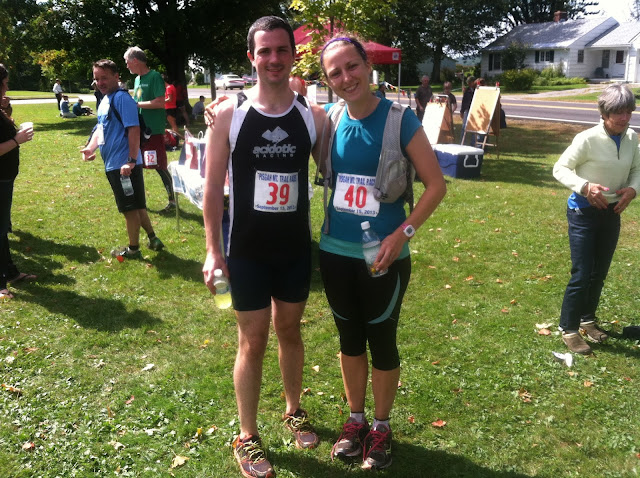 My feet hurt pretty bad afterwards and my shoulders are always sore after a long race but I feel pretty good. The kids at practice today couldn't believe that anyone could run 14 miles. I didn't even tell them I am doing a marathon because they would think I was extra crazy and would really not listen to anything I said.

Now I just need to stay motivated for November 2nd.