In March Charlie's grandmother passed away and recently her children went to her house in Florida to clean some things out in order to sell the house. Charlie's aunt, Carol, asked if I wanted "some" yarn and cross stitch materials they had found at Grandma's house, so I said yes. Today two huge boxes showed up at our apartment. 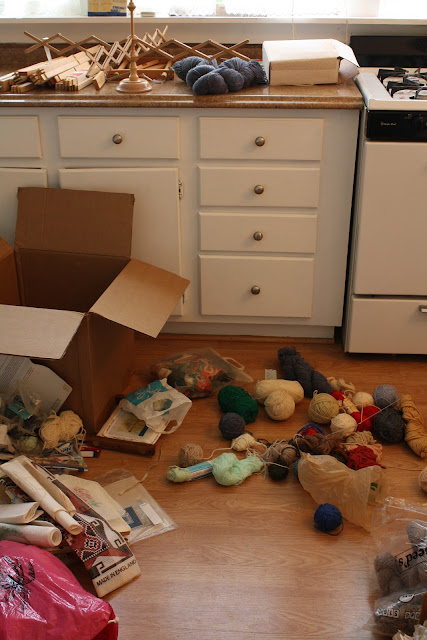 And then the boxes exploded all over the kitchen. And two hours later I am done sorting through them. There were tons of fun finds. 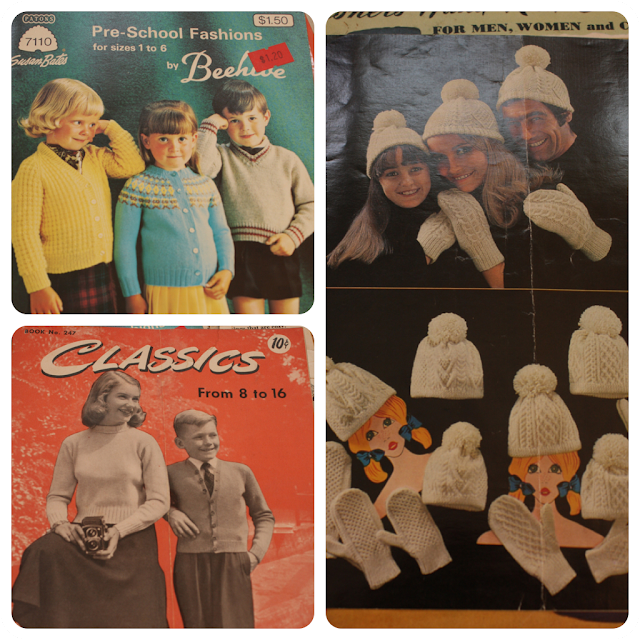 There were a bunch of very old knitting patterns. I asked Charlie if he ever got an knitwear from his Grandma, he said he didn't so I wonder who she knit all this stuff for. Or maybe she did knit him something but he was too "cool" to ever wear it. Wouldn't you love to see a family dressed in matching hats and mittens? The preschool patterns are so adorable. Would you like to take a gander at when the "Classics" pattern was published? 1948. What?! A lot of the patterns I am going to take to my Mum's house, she knows tons more about knitting than I do and I think she will like them. 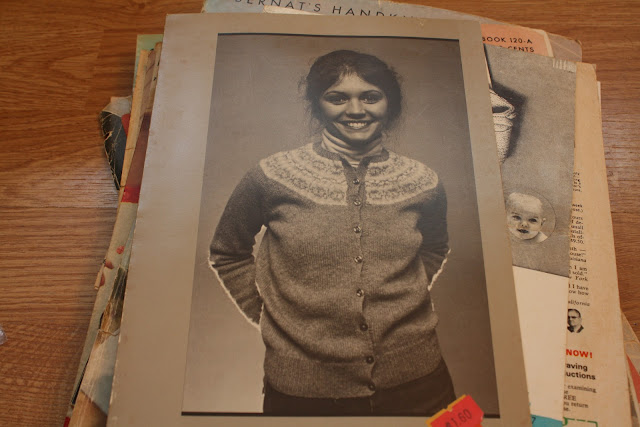 Maybe if I ask her pretty please she will make me this sweater. It's so cute!  One thing I noticed is that Charlie's grandma only bought patterns when they were on sale, a gal after my own heart....or vise versa. 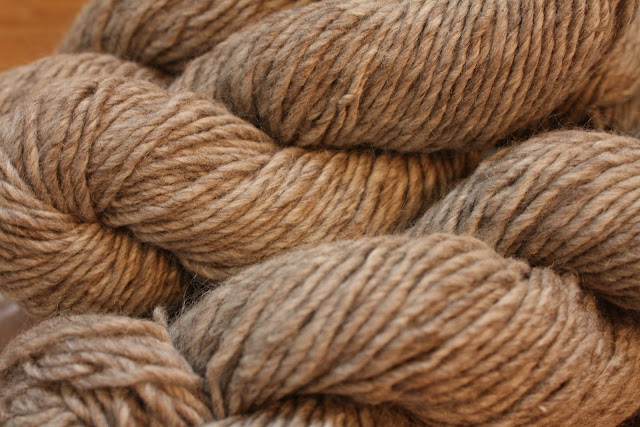 The box included tons of yarn. Most were just scraps and left overs, but there are several skeins of this tan, a blue, and a very soft light brown. On top of buying things on sale, Charlie's grandma was also not great at finishing projects before she started something else. Another thing we had in common. There were tons of half done projects. 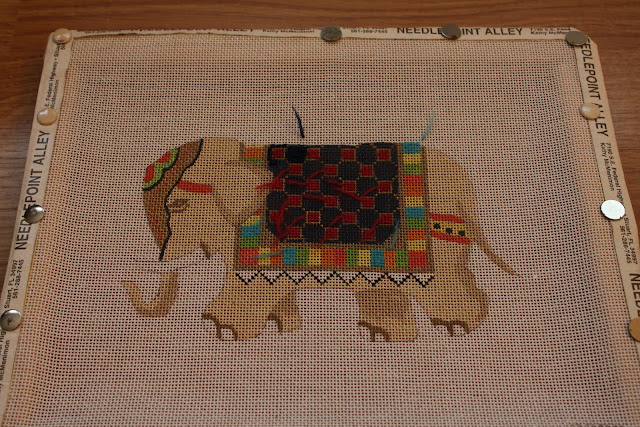 I'm not very into needlepoint, but this half done project one caught my eye. I love elephants, in case you didn't know. Maybe I'll try to finish it, after I finish THIS cross stitch.  The box also had a magnifying glass you wear around your neck, and a clip on light with a magnifying glass. Maybe that would make cross stitching easier for me...probably not though. I think it has more to do with feeling like I am getting nowhere than with my poor vision. 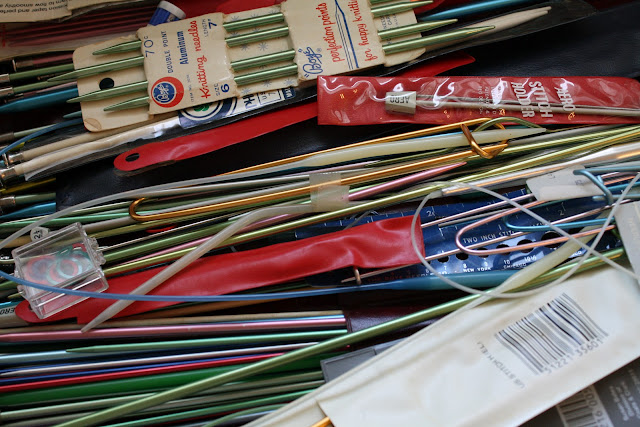 Another huge perk of the package explosion was all of the knitting needles. Please friends, never rush out to buy a set of size 6 needles because I now have 5 sets. I also have two sets of size 1 needles, so if I'm ever low on toothpicks I can just use those. Have you ever tried to knit with a size 1? Ugh. It's terrible, maybe the magnifying glass would make it better. 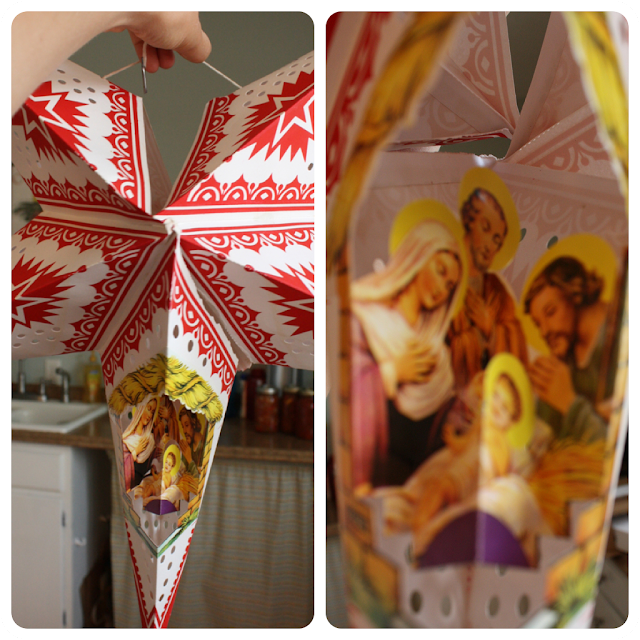 We pulled out this paper star and I got really excited because I had a bunch of those when I was younger and thought it would be cool to have another, but this one has the baby Jesus in it. Kind of weird don't you think? Lastly, do any of you have any idea what this contraption is? We've very confused. 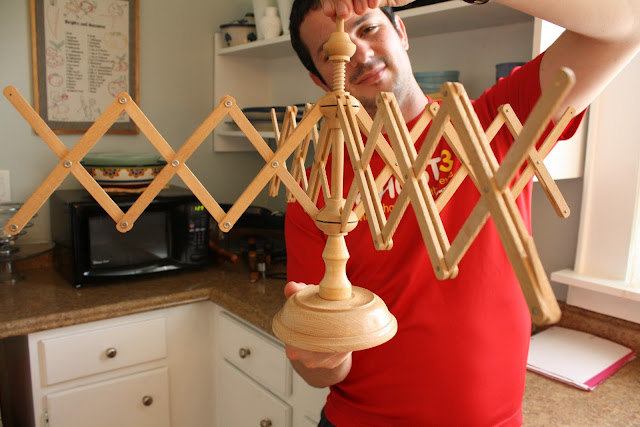 It was fun learning more about Charlie's grandma through looking at all of her crafting stuff. I only got to meet her three times, and twice were at parties where we didn't really get to chat much so it feels nice to know more about what she liked to do in her spare time.