As you may, or may have not noticed, I've been absent from blogging lately. Mostly this is due to our vacation, but also due to my broken computer. Back in June my old and slow yet still working Macbook was resting peacefully on the bathroom sink playing music for me to listen to in the shower, and then she decided her time was up and fell onto the floor. The screen was cracked and was originally not to bad to look at, but then it got worse. Then in an attempt to save pictures and space on the broken computer I accidentally deleted all of my pictures, cried for 30 hours straight, then moved on. Most of the pictures I liked are on Facebook,  my blog, or on CD's, so after realizing this I felt okay about it, but still kind of sad. Then I took it to the Apple Store where I was told it was "going vintage" which seemed like a good thing, but wasn't. Here's what it looked like in June (sorry it's blurry) 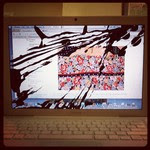 I thought I could make it with just an ipad and occasionally using Charlie's PC (on which I am typing now), but I cannot live without a computer, and I, the snob that I am, cannot live without a Mac. I need my keys to be separated and have shortcuts, and I hate right and left click! Also having a computer that looks like this is very difficult to do pretty much anything with except use it as a paper weight. 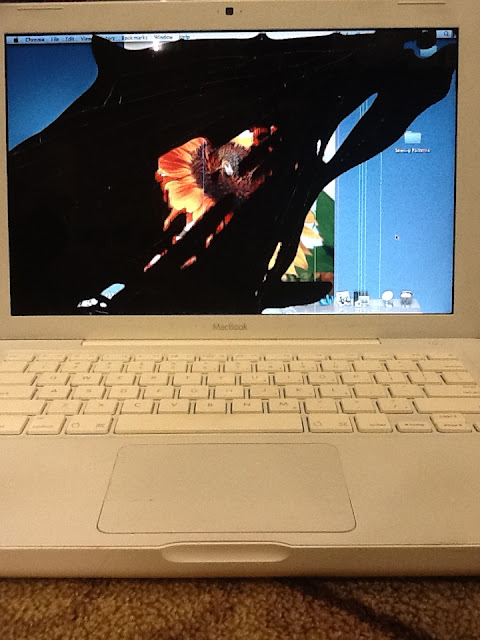 After much debating I finally bit the bullet and bought a Mac Air. I figure my old Mac lasted a good 6 years so if this one lasts me that long it will be a good investment. As a cherry on top I got a $150 discount for being a teacher, score. And in case you were wondering here are 5 reason Macbook Air Rules. Isn't it pretty? 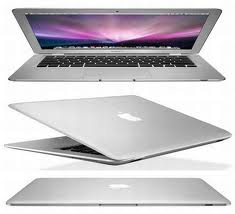 This post was mostly just to warn you that coming August 16th I will be posting on this blog daily (ha) because my new computer will be here and will be so light and easy to use that I will be uploading pics and blogging away! Get ready.

P.S. This is an unpaid advertisement for Apple and an unwanted dis on PC's. R.I.P. Steve Jobs.