Pincushion/ Back in the Saddle

After Christmas I was pretty tired of sewing. It probably had something to do with deciding to sew every person I knew a present, and not realizing until the last minute that my goal was purely absurd, and then being stubborn and sewing all of the presents anyways. In the midst of all the sewing and wrapping and stress I didn't even realize that I didn't take any pictures of the presents. What a bad blogger I am! My forgetfulness, and stress, and maybe a stomach bug, made me realize I needed a break.

So a break I did take. Until last night when I decided that I could not sew another thing until I had a new pincushion. I found this tutorial which lead me to this other one, which is the one I used. I liked the first tutorial but didn't feel like making mine out of 6 different fabrics. I used left over scraps from Sammy's Apron. 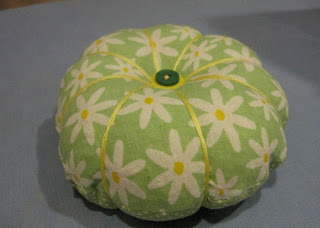 Pretty cute huh? The tutorials said to fill it with fiberfill but I thought that would be too light. Mine is filled with rice, so it's heavy and sturdy and won't get knocked off of the table and shoot pins everywhere.

After sewing this little project I felt inspired and started cutting out and sewing quilt squares out of the Anna Maria Horner Voile I bought back in (gulp) August.

Now, thanks to a little pincushion  I am back in the sewing saddle and boy does it feel great.  Off to cut some more squares!

Lauren
Posted by Lauren at 9:04 AM