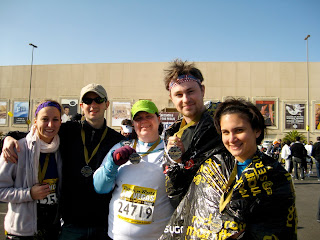 Me, Charlie, Danielle, Jay and Meera
Well I don't know where exactly to start so I will just start. Whenever I go anywhere Jaclyn always asks me to tell her the top 5 best and worst of the trip so that's how I will organize this post about the half.

I feel somewhat negative at the moment, it might be the extreme amount of lactic acid in my legs and my sore back and the fact that one of my ears hasn't "popped" back to normal since the flight home but I'll begin with top 5 worst of the race.

1. There were a lot of people. It was a half and a full so total there were about 25,000 people. I am a country gal and I get agitated/ nervous when there are a lot of people around. During the race it wasn't so bad, there was always enough room for me to run it was the post race amount of people that scared me. I didn't run with a cell phone or a room key so once I finished and couldn't find Charlie at the designated area I began to panic a bit, and then once I did find him I decided to cry loudly in front of all those people (but that wasn't the first time I cried, read on...)

2. The finish line was at Mandalay Bay hotel/casino. The problem was that you could see said hotel from about two miles away. I felt like Mandalay Bay was taunting me and wanted me to give up. Mandalay Bay was like a mirage on the Las Vegas desert horizon, I thought I would never reach it. By about mile 12 I decided that I would never get there and I would be stuck running forever, that was when the tears started welling up in my eyes. All along the course there were people taking pictures to post on the site so you can buy them later and show your friends. For the first half I would see the photographers and smile or try to look like I was all that and then some; let's just say I won't be purchasing any pictures from mile 12.

3. There was staggered starts. So all 25,000 people didn't start at the same time, which is good because I would have probably gotten stomped to death if that were true. However, when there are staggered starts you have no idea who started before or after you. In a race when everyone starts at the same time if someone passes me then that means they are beating me and I get angry and try to pass them (or at least hope they get a severe cramp). Yet in this situation whenever someone passed me I justified it in my head by saying "oh it's okay, that person started sooner than I did, they aren't beating me"....when they very well could have been beating me.)

4. No one cheered for me. I tried to be happy with strangers cheering for me and standing on the side giving me high fives, (which is very nice by the way, thanks all you nice strangers) but it didn't cut it for me. Everyone I knew in Las Vegas was running the race so I had no one on the sides cheering for me. I guess I am not very intrinsically motivated when it comes to sports (I always dove best when my Mum or Dad was watching me). It feels good to have someone you know up ahead who will yell to you and say nice things and be at the finish line waiting for you. That was depressing; finishing and having no one there to say "hurray you did it!" I think that just means I should only run races where I can force my parents to come see me.

5. I didn't make friends with anyone in the race. In the last one I met a woman who was running the same pace as me and we talked for more than half the race, but not in Vegas. I just couldn't find someone who was nice and was running the same pace as me. In fact I don't even remember running in the same group of people for any length of time. I think this might be because of the staggered start and me not being in the place I should have been based on my time (I was in a slower start group than I actually should have been, so I ended up passing a lot of people, not really a way to make friends).

Now on to the good stuff.

1. Being able to run on a 4 lane road that is usually hustling and bustling 24/7 was pretty cool. Not to mention running past some of the most expensive hotels in the world. All the lights and signs were entertaining to see as well. Oh and some of the hotels had the race on their jumbo screens so you could see the fast people and the huge crowds in front of you and also behind.

2. The race went up the strip then back down, this means I got to see Charlie running twice and cheer for him and tell everyone around me "That's my boyfriend, he's wicked fast!!!!"

3. Las Vegas is flat so running there is easier than running in New Hampshire, where the hills are numerous.

4. There were fireworks at the beginning of the race. Nothing gets my blood pumping like the smell of sulfur at 6 am. (Must be the fact that I am the daughter of a fireman and a firework loving mom.)

5. The people in the race were certainly more entertaining than most people in races I have run. There were more people dressed up like Elvis than I could count. One man wore a speedo and bow tie, some people didn't wear shoes, I saw one man wearing a huge brimmed cowboy hat, and lots of couples ran the race and stopped along the way to get married. They were very cute, I liked the brides who wore veils. There were also people who pushed strollers, not filled with kids but with coolers of beer and boomboxes. (I hope none of these people beat me, but they very well might have).


Anyways I made you wait this long for the results so here they are:
All and all it was a good race and I was glad to have had the opportunity to do it and I had a lot of fun with Charlie and his family and am very grateful to have been taken along for the ride, or run.