A Christmas Wrap Up

Why Hello everyone! I have had two wonderful Christmas celebrations. And got many excellent gifts! Two of those gifts I would like to share with you.
The first was from my dad; he bought Charlie and I a canoe!!!! How exciting. It is green and holds two people, or maybe more, and has 2 *paddles. I was so excited, and still am very excited about it. I wish the snow and ice would melt so I could go cruising in my new canoe. Charlie and I just need to buy life jackets because even though New Hampshire is the Live Free or Die state we still need life jackets. We also need to think of a name for the canoe, because it's bad luck to have a boat without a name, and sadly Jenny is already taken, perhaps Jenny 2 will work. Oh and we also need to learn how to steer a canoe, since neither of us know how. It would be quite typical for Charles and I to set out on our first canoeing adventure on Great Bay with no clue how to steer and then ending up in Venezuela 10 days later. So although it goes against my genetic make-up to read directions or ask for help I will be learning to steer the canoe before I do anything drastic or stupid.
After my dad showed my the canoe on Christmas day he pulled out this picture: 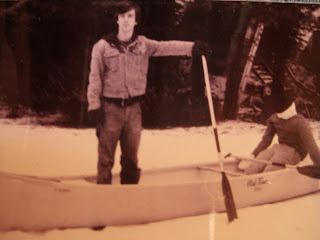 It is him exactly 30 years ago on Christmas day 1979. His parents bought him a canoe. And there is some long story about that stuffed person in the canoe with him who he named Mr. Lupiner, but I won't get into that.
Anyways, we decided to attempt to re-create the picture 30 years later. Here is it: 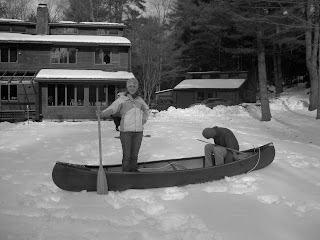 We didn't have a stuffed man hanging around because Mr. Lupiner died when he was shot with a flaming arrow so Garrett had to do.
Afterwards we figured that since it was winter and we couldn't go for a canoe ride we might as well put the canoe to good use and sled down our hill. Here's Garrett and Dad on one trip down. 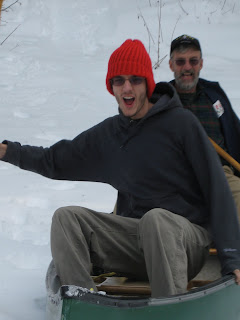 And here is a video of Garrett and I on one trip down. It was quite exhilarating.

Now on to my other great present. I can hardly contain my excitement so here it is: 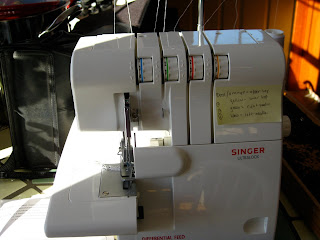 A serger!!!!!!!!!!!! Hurray. For those of you who don't know what a serger is look at the seam on the shirt you are wearing at this very second; that my friend was made with a serger.
I was extremely excited when I opened this gift from my Mum. When she told me the big gift was for me and told me to guess what is was I said "A toaster oven?" and she said "Oh no, how did you guess?" and had a really sad look upon her face which made me believe that it was a toaster oven. Then it was a serger instead, my Mum is such a good fibber/actress.
The next day I set it up on the kitchen table and without reading the directions began to serge and proceeded to mess up the serger instantaneously. I then spent the next hour and a half re-threading the entire thing and reading the entire manual in the process.
I suppose the Christmas lesson I learned this year is to read the manual/know what you are doing before you start, and I am glad that I learned that lesson on the serger and not in a canoe on my way to Venezuela.
Lauren!
Posted by Lauren at 11:30 AM