As some of you may know, My grandfather, Frank, passed away a few weeks ago. His memorial service was this weekend. His 4 sons, including my dad, spoke at the service, as well as four of his close friends, and my cousin Zachary. My dad asked me if I wanted to speak and my response was "No, I will cry too much." Instead of crying in front of 100+ people I've decided to write my memories here to share with you.


* Edit: This introduction was written almost a year ago. I just couldn't finish my post. Not because I was crying or anything like that but because every time I tried to write a whole post I wrote one thing and then had too many memories to start another. This post has been compiled over the course of several months of remembering. *

1. His laugh. Frank had an infectious laugh that could span a few octaves. It started low then worked it's way up to a high almost girlish proportions and then subsided into few "ho ho's" as he calmed himself down. He would open his mouth wide, I suppose that's the dentist in him, and let it all out. There was always a bit of leg slapping or foot stomping mixed in as well.

2. His love of fitness. From early on I always remember Frank wearing running shorts, tennis shoes, an old tee shirt and a hat. He was always up for a game of tag, a bike ride to the store or a race against you on your Rollerblades and him on foot, which he would always let you win even if he could have beat you. If you asked nicely he would even let you stand at the top of the stairs and he would catch you when you jumped, as long as you didn't weigh very much that is.  I'm not sure if I actually remember this, or if I've just heard the story so many times that it feels like I was there. Either way, I've heard many times about Frank being at the cottage on the Cape before a hurricane and body surfing in the huge waves. I'm not sure how old he was at the time but I know it he was over 60 at the time. I think part of my interest in running is thanks to Frank who ran his last 5k when he was 82.

3. How he was never embarrassed by anything. This might not seem like a lot coming from someone as self-conscious as me but I always admired how Frank never seemed embarrassed by anything. He would wear purple tee-shirts, his shorts were dangerously short at times, he loved to needlepoint and garden. Growing up I think it was always nice to have someone around who wasn't afraid to be who they were and like what they liked.


4. His generosity. I think if I had asked he would have given me or even a perfect stranger the shirt off of his back. Frank worked hard for his money and never seemed to buy anything for himself, but was always willing to take the whole family on a vacation. I have many fond memories of spending time with my cousins, aunts and uncles and Grandmother and Frank in Mexico, Florida, in Tone, or on the Cape. Once Frank and Grandmother even took me on a 10 day vacation to London. I remember my uncle ordering an expensive bottle of wine while out to eat in London on this trip. Frank said; "You're wasting your inheritance!" with a laugh and footed the bill anyways. I think it made him happy to be able to make others happy and have great experiences.

5. "Wanna go to Boston? Wanna go to Lynn? Look out little girl that you don't fall in." I think Frank bounced me and Garrett on his knees singing this little tune half a million times.

6. This is something that I don't even know if he did on purpose or if it just had to do with my above mentioned comment about never buying anything for himself. I remember when I was in 5th grade there was a contest to design a "gateway" on the school property to get to the wetlands behind the school where we did experiments and observed nature and all that other middle school stuff kids do. Someone else won the contest but I still wanted to be involved in working on it. Frank and Grandmother came to visit for a weekend when my school was working on the project and volunteered. I don't even remember what we did to for work on the project but I remember the shirts they gave us. They were dark green with a yellow outline of the archway and said "GBS Gateway to the Wetlands" or something to that extent. Even as a 5th grader I thought they were kind of ugly. Not Frank though. It seemed like whenever he came to visit us or we went to Auburn to see them he wore the shirt. Like I said, I don't know if it was because he really liked the shirt, or if it was because he never bought shirts for himself, or if he just liked to wear it when I came to visit because it reminded him of me. I'd like to think it was the last reason.

These are some of my favorite pictures of Frank. 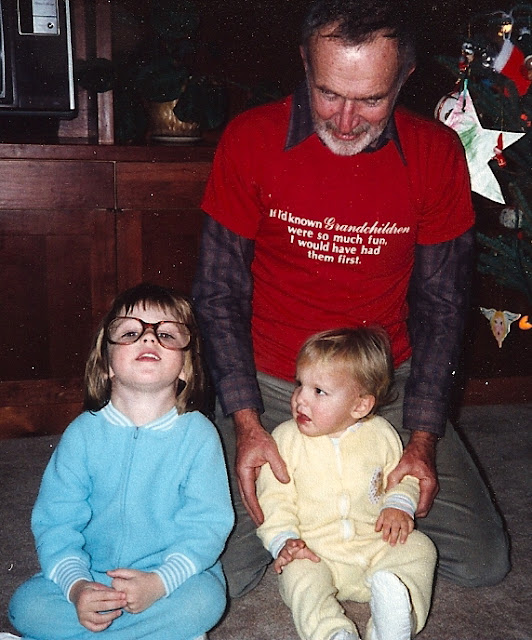 with Garrett and me around Christmas time. 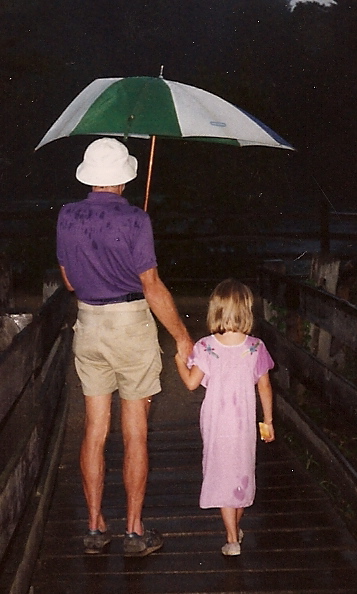 See, I told you he wore purple a lot and liked short shorts. 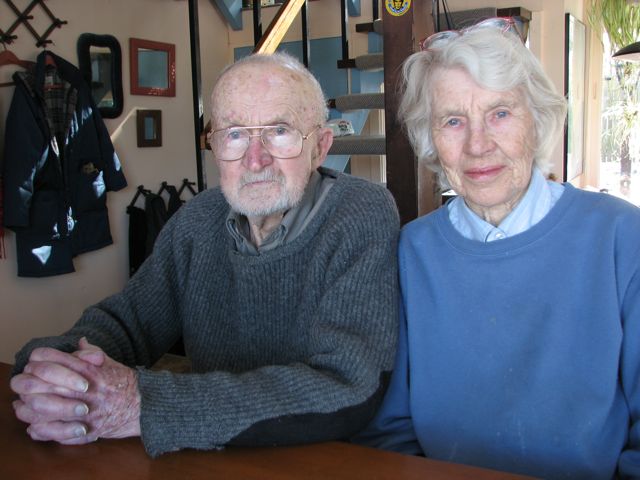 Taken a few weeks before he passed away.
Posted by Lauren at 1:38 PM