This weekend was very busy. We went to Connecticut for Charlie's grandmother's 90th birthday party. It was loads of fun. I had never met most of Charlie's relatives before so it was great to get to meet them. Plus, I already knew all of their names and where they lived from addressing wedding stuff. Lots of putting faces to names. After the party on Saturday Charlie's aunt hosted a bridal shower for me, and also for my future sister in law, Meera. Having a joint shower is not as much pressure, I'd recommend it.

Anywho, when you're sharing a bridal shower with someone you don't just get presents you get to give them too. I made Meera an apron over my vacation. I purchased the book "A is for Apron" over a year ago and finally decided to put it to use. The only problem was that there were no pattern pieces included, just a few pages in the back that needed to be enlarged 400%. I had/have no idea where to get pattern pieces enlarged and printed, and I didn't really feel like leaving the house at the time, so I pulled some newspaper out of the recycling bin and winged it. After cutting most of the pieces out Rich came inside, noticed my dilemma and tried to help me to do math to fix it. At that point it was too late, and my measurements were far too off to be remedied so I continued down my path of winging it/ figuring it out while I worked, plus I hate math. 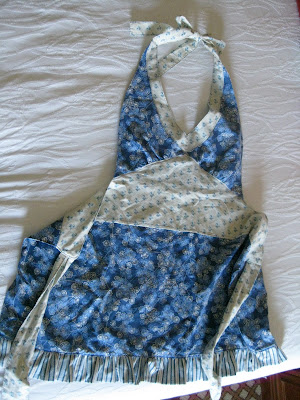 Despite my winging it I think the end result is pretty nice. After reading some of the reviews of the book lots of other people had problems with enlarging and following the poorly worded directions as well. Glad I am not the only one. I even winged it/ deviated from the pattern enough to make it reversible. 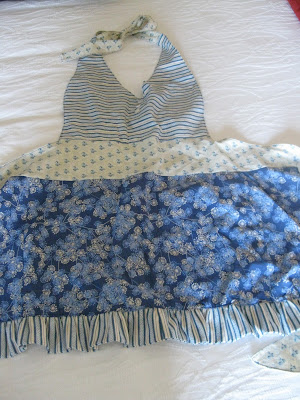 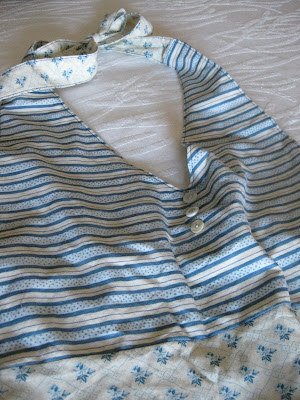 Jay (Meera's future hubs/ my future brother-in-law/ Charlie's brother) decided to put the apron on once the boys returned from bowling. As I was snapping his picture Charlie said "She's going to blog about this!" At least he knows me well, right? 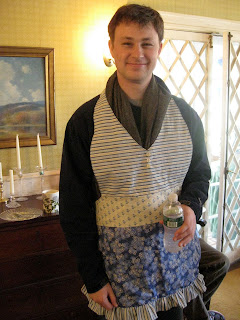 The best part was when Meera opened my gift to her she said "An Apron! I was so jealous of the apron you made for Danielle for Christmas." I love making gifts for appreciative people, especially when they are also really nice and fun to boot.