Yesterday Charlie and I did the trail marathon. We spent the night at a friends house so we were only 30 minutes away instead of 2+ hours away. But we still had to wake up at 4 am in order to get ready and registered in time. Geeze! We were looking quite chipper for 5:45 in the morning. 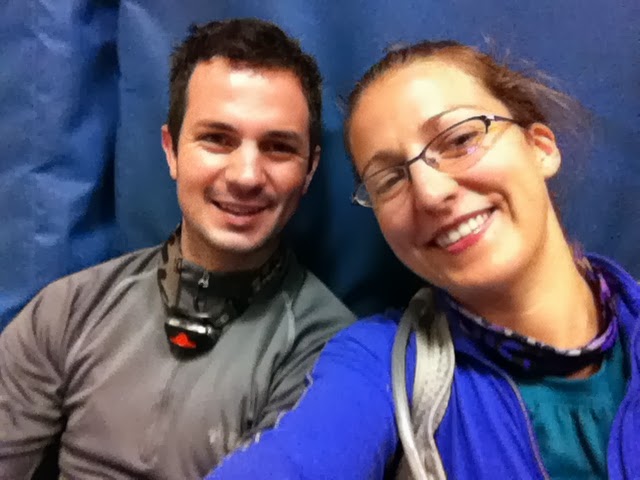 The race started in the dark because people were doing a marathon and also a 50 mile race, and when you run 50 mile you need all the day light you can get I suppose. We had to run with headlamps on for the first half hour or so. The start for us went around a field, it was so cool to see everyone running around a dark field with head lamps on. Then the race went into the woods and there were glow sticks hanging from the trees; which also looked really cool. Charlie gave me the better head lamp to wear, except since it's the one we use the most at home the battery was nearly dead. I had to stay close to people on the trail who had bright lights so I wouldn't fall.

I have/had been having trouble my entire training with getting blisters on my toes on long runs. I tried a lot of different solutions, but nothing really seemed to work well. I think the shoe brand and model that I have been wearing forever has changed and now the seam rubs my pinky toe funny and gives me blisters. I thought wrapping my toes in medical tape would be a good solution; except the wet leaves made my shoes wet which made my socks and feet wet so the tape came off. At mile 4 I could feel that I was getting a blister. That was a bummer. Then at mile 5-6 I got stung by a bee. I haven't been stung by a bee in over 10 years so I forgot how much it hurts. I convinced myself the bees were tracker jackers, and thought about how great it would be to go into anaphylactic shock so I would have a good excuse to not finish the race. Blisters and bee stings are pretty annoying. I did keep laughing to myself and thinking about this scene from Romy and Michelle's High School Reunion.  By about mile 10 I has stopped twice to try to fix my foot situation and had come to the conclusion that it was just going to hurt the rest of the race and I had to deal with it.

Enough complaining though, the best thing about trail racing is the food. Every aid station had 2-3 tables full of food and drinks. I ate 5 Oreos during the race and wish I had had more. The people volunteering at the stations are super nice and accommodating. I asked for a bandaid and the lady unwrapped it for me and acted like I was on the brink of death. Did I really look that bad?

Also the weather was perfect. It was in the 50 and 60's which is super rare for November 2nd. It wasn't too sunny, but not cloudy either. I was never too hot or too cold, and it wasn't raining. The scenery was beautiful too. 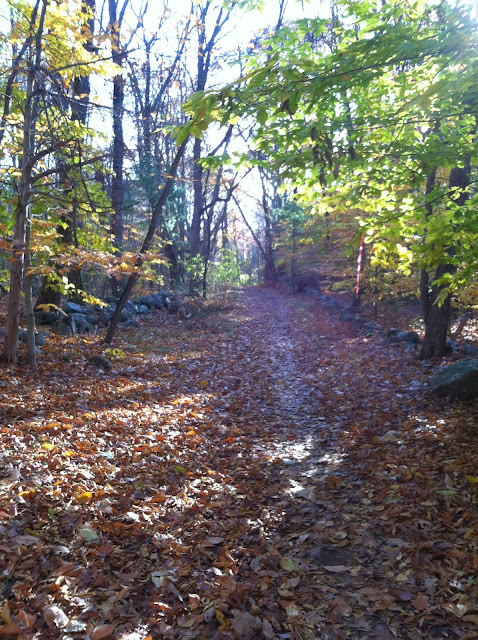 Another wonderful thing was that my Brother-In-Law and Sister-In-Law came to cheer for us. Jay brought a train whistle so I could hear him through the woods. I have mentioned it multiple times but the best thing ever during a race is having someone you know cheer for you. He even ran ahead of me and took my picture. This is my pretend you're having fun, even thought you're not even halfway done face. 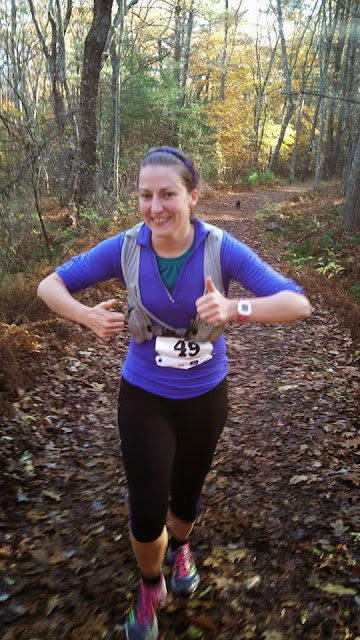 I ended up running (walking/running) most of the race by myself. Sometimes I find someone going the same pace as me and I stick with them, but not this race. My watch stopped working at mile 16 and I thought I was going crazy and that mile 16 was taking forever. So I was that annoying person who asked a bunch of people how much farther was left. I also kept getting passed by fast people running the 50 mile race; what a confidence booster. People running almost double of what I was running were passing me, and looked great doing it.

Charlie finished in about 4:25 I think. 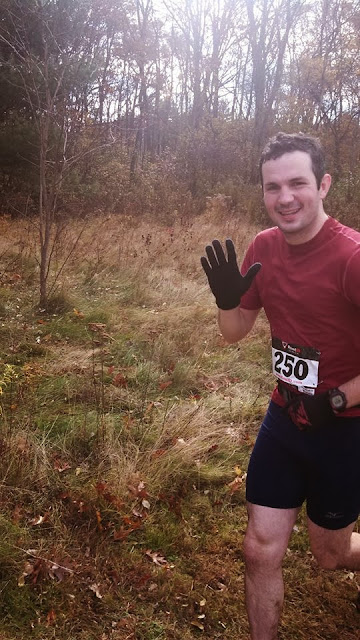 My time was 5:47 or something around there. That's pretty slow, and I'm kind of embarrassed about it, but I did stop 3 times to try to fix my shoe situation, and I did walk some. I probably could have done it faster, but oh well. After my first marathon I said I would never do another one, and I said the same thing yesterday. 26.2 miles is farther than I drive most days. Also, if a race takes you longer than the number of hours you slept the night before you should probably reconsider your life choices. But we both finished and they gave us sweatshirts that say "Marathon Finisher" on it, so I guess it wasn't all bad. 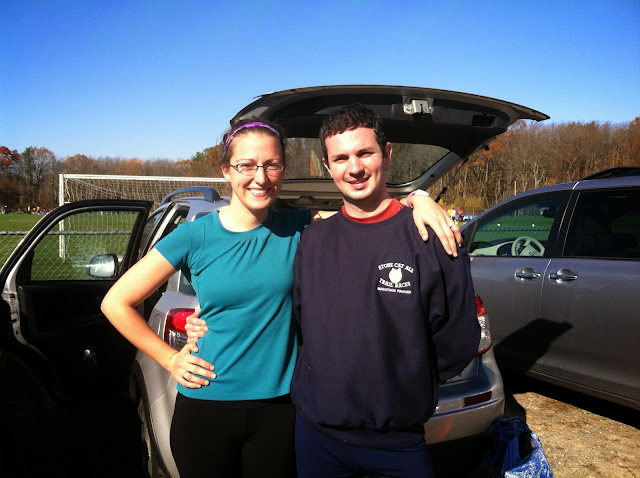 After the race we went to our friends house to shower and they fed us really good food and let me lie on the couch and refreshed my drink when needed. It was great.

Last night we were in bed by 7 and stayed up until 8:30 watching a movie and eating ice cream. Then I turned the clock back so it was like we went to bed at 7:30. Can't complain about that I suppose.

I'll be sticking to shorter distance races from now on.