Charlie and I decided that since it's been so hot and humid it was the perfect time to do two things: 1. Buy a pellet stove, and 2. Paint the kitchen.

You might remember that there was an outdated fruit basket border around the kitchen, and a maroon/red paint on the walls. I didn't like it instantly when we looked at the house, and was sure it would be the first thing to go when we moved in. I did purposely rip the border while cleaning the walls 2 days after we moved in (so no one would like I actually liked it), but aside from that we lived with it for the last two months. Mostly because I wasn't sure what color to paint it. 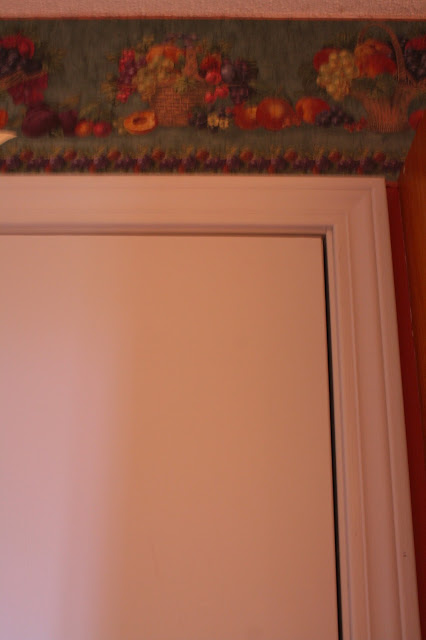 On Sunday I had had enough of the border and immediately following breakfast I began to tear it down. It wasn't until 2 that I realized I hadn't brushed my teeth. It was tough work. I wished we were either shorter, or had longer arms. We had to stand on the counter to reach the boarder, but that involved bending your neck. We tried to use a step ladder, but then our arms weren't long enough to reach over the cabinet. Also, the recessed lighting kept burning my face and hair. It took us four hours just to get the border off. After that Charlie cleaned and entertained the dogs and I got painting. I think he was sick of being in the kitchen with me, and listening to my 90's music choices. 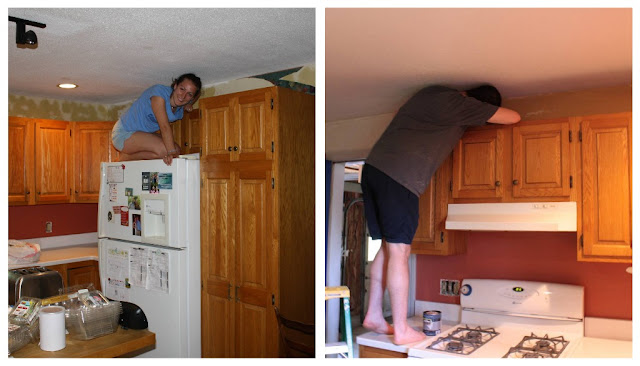 I did two coats on the bottom and one coat on the top on Sunday, then we went to a friends for dinner, thank goodness because the kitchen was a wreck and we wouldn't have been able to make much of anything in there. Then on Monday morning I did another coat above the cabinets. It didn't take too long, because there wasn't really much wall space. I used less than a quart of paint. So glad I didn't let the guy at Home Depot talk me into buying a gallon. 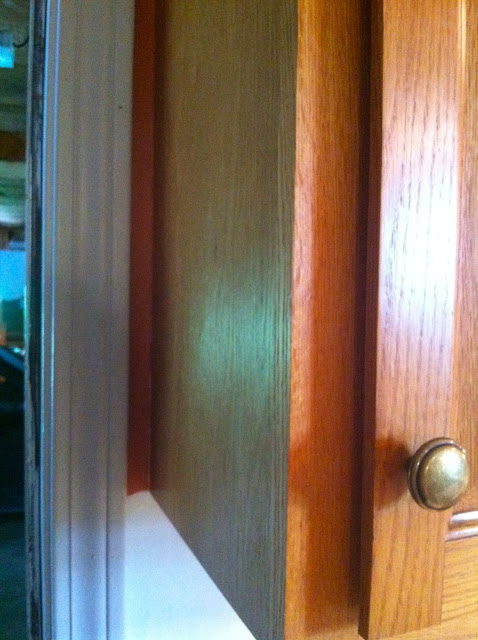 Some parts were a real pain to paint though. Like this little area between the cabinet and door to the garage. Luckily I had a tiny art paintbrush that did the trick. 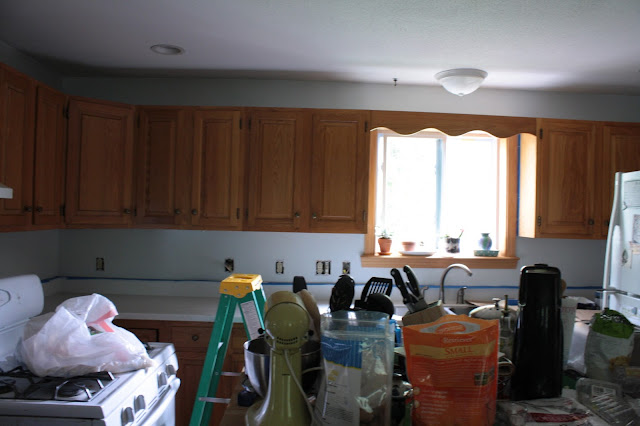 I told you it was a disaster in there. After letting everything dry we out everything back, mostly in the same spot. We realized how much cabinet space we have that we weren't using so some things that were on the counter and now in cabinets. Here is the before and after.

Much more my style. I like it a lot. I can't tell if Charlie has a style/likes it or if he just likes it because I like it. Some more after shots, goodbye fruit basket border. 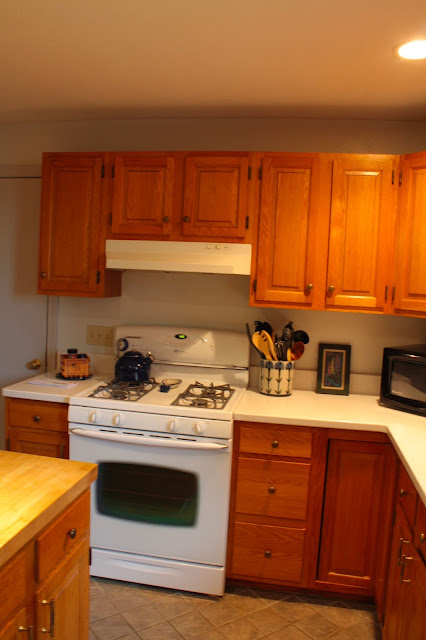 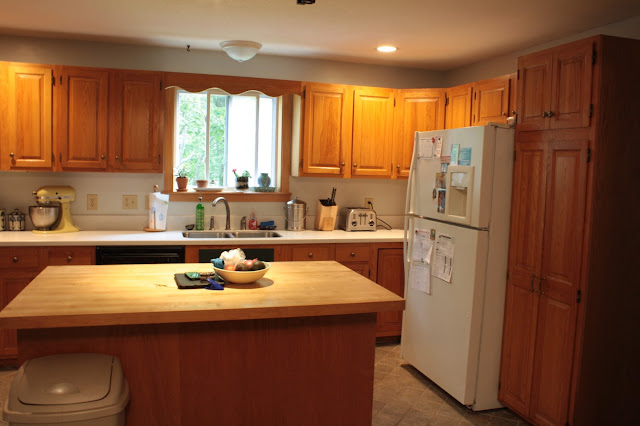 Now that the border is gone I can focus on the other (smaller) things I want to change in the kitchen. First up is the cabinet doors below the sink. I am not sure why the previous owners painted them green, but they did. My dad says there is no way we can stain them again so I guess we'll have to paint them as well. Any ideas on colors? I was thinking about stenciling them but I think that would make it look like a 95 year old woman lived here, and my sewing room already gives that impression, we don't need more of that. I also thought about taking the doors off and having a little fabric curtain there, Charlie said no to that idea though. 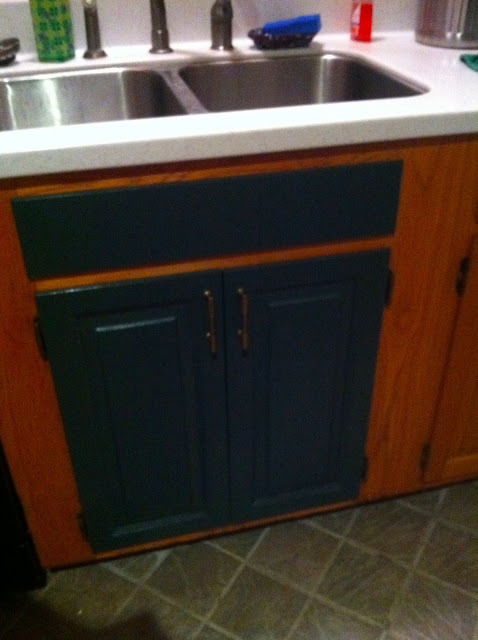 The next thing is the track lighting above the island. Only one of the three lights works, and we don't like the light to begin with so we're not going to spend $5 on a bulb if we don't actually like it. I've been looking online for some vintage or vintagesque lights. I like the look of milk glass lights (surprised?)  and "schoolhouse lights", but am worried about buying them online without seeing something like it in real life. I'm on the hunt for something like this, or this. 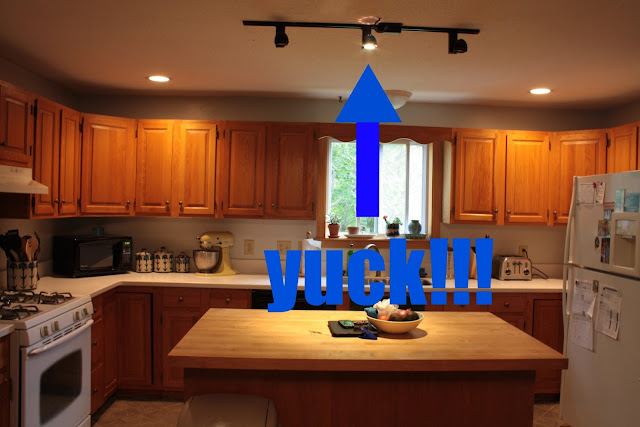 Lastly, I think this swishy wave accent above the sink needs to go. I'm just worried it will leave a mark on the cabinets when I take it down. Perhaps I should not smash it with a sledge hammer to get it down, which is how I imagine doing it. 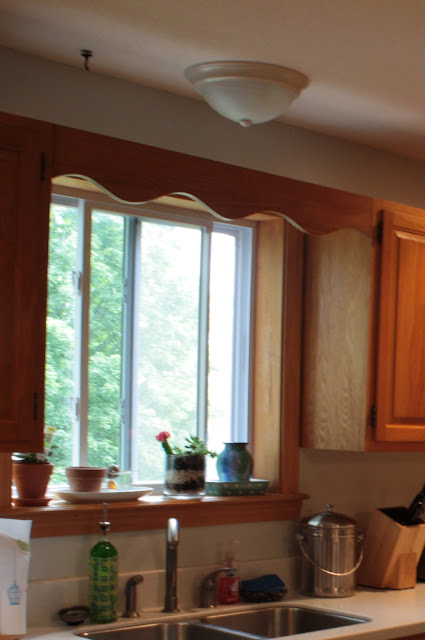 I really like it and feel much happier in the kitchen now. Not happy enough to cook though!