Well folks, today I ran 13.1 miles in the Apple Fest Half Marathon in Hollis, New Hampshire and I lived to tell about it. As some of you may know I have been training for this race, in preparation for another half in December. Anyways, the day rapidly came and thus Charlie and I found ourselves getting up at 5:53 on a Saturday to drive to Nashua to meet Charlie's dad and proceed on to Hollis. Not much interesting to report about the race except that it was more hill filled than I had expected and the weather was gorgeous, and also I made a friend named Kristina along the way. She forced me to keep up with her at one point, and told me I could break 2 hours and pushed me so hard I ended up beating her by one minute. Thanks for the help Kristina. I just love meeting people at races who are very nice, caring souls. I wish we could be friends, if only she didn't live so far away.
Anyways, let's get down to what you people really care about; the results. Charlie got 6th place with a time of 1:14:36. Yeah Charlie, I am so proud. I got 477th place with a time of 2:00:25. Which is a much better time than I was hoping for, and considering all the hills. I am very proud of myself. I would also like to mention that Lennart Svenson of somewhere not in America, beat me by 10 seconds, did I mention he is 70. Well done Lennart, I applaud you. John (Charlie's dad) finished with a time of 2:18:38. He did very well, but I think he wanted to do better. I think we both will have an easier race in Vegas, there are no hills there!!!!!!! I applaud everyone who ran this race, it was very hard. And thanks to the man playing the bag piles at mile 8, is that something I should expect at all the half matathons I run, I hope so. And I also want to thank the people at the mile 6 water station who dressed up like Harry Potter characters, you were awesome. And a special thanks to Hermoine who gave me my water.
My Dad and Mary Lou came to the race and they cheered me on in 2 spots, 2! I couldn't help but smile, even though I wanted to secretly cry.
Here are some of the pictures they took. This is mile 11. Mary Lou yelled and I smiled, and tried to keep smiling until they couldn't see my face anymore. 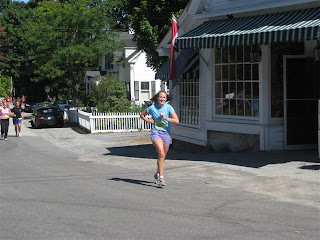 Here is me 2 seconds after the first picture was taken, still faking the smile. Or maybe it was real smile at this point, my Dad probably yelled something inappropriate or inspirational, but most likely the first option. 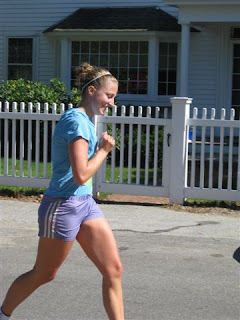 This is at about 13 miles, which means there is only .1 miles after that. Once Charlie cheered for me I started running faster, then I slowed down when I thought they couldn't see me anymore, then when I saw the clock and realized I could finish in 2 hours and a few seconds I ran really hard. Then I crossed the finish line I wanted to cry, but didn't, because they gave me a medal that is also a bottle opener, who could cry with that around their neck? Not me, no way. 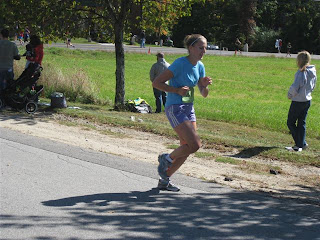 Here is John, almost done. He was so in the zone he didn't even realize I was cheering for him. We don't have any picture of Charlie running because he is so fast. 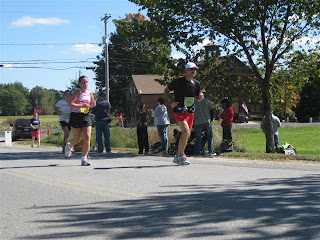 Here is us at the finish waiting in line to get food. Boy was the food good; cider, bagels, cookies, cheese slices, and pretzels. Yum. 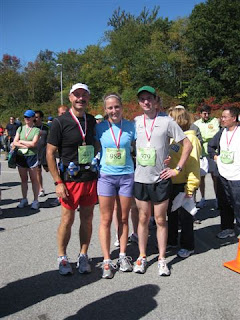 Now for the best part. We waited around for the prizes because Charlie knew he would win something. He got 2nd in his age division and won a Pie! Then I won a basket of apples (kind of). Here's the real story: A bunch of people who would have won prizes had they stuck around, well, didn't stick around so their were extras. The announcer decided to pick random numbers and see who had a bib number closest to it, but I didn't win that way. Then he randomly decided that people who were from New Jersey were more deserving than the rest of us and he gave a bunch of pies to then. I have always personally been under the impression that people from New Jersey were kind of obnoxious and sleazy, but now I am being xenophobic. I obviously didn't win the apples that way, since I hate NJ and am proud to be a New Hampshire girl. (no offense to anyone from New Jersey.) Next, he decided people who had a birthday that day deserved a pie, which I can understand. Then people who went to Boston College or BU deserved a pie. In this case I am under the impression that if you went to BC or BU you have enough money to buy a pie when you want one and don't need one given to you, but now I am just being prejudice against rich people. At this point I was getting annoyed at the announcer and thinking about leaving. Then he started giving away the left over apple baskets, so I stayed. After picking extremely random reason to give people prizes, like because his mom went to the same college as a girl wearing that college sweatshirt, he finally said "Anyone who graduated from UNH can have an apple basket." Only 1 person went up so I followed and said, "I am a graduate student at UNH, does that count?" and he said; "That's even better, take a basket." Then I had an apple basket and I mysteriously liked the announcer again. Until I realized that I had to carry a 10 pound apple basket over a mile back to the car with my sore legs. But I did it, and the apple basket make it home: 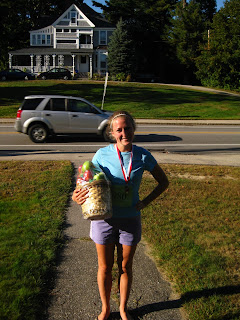 I have class tomorrow and I am planning on wearing my medal, and probably sweatpants.
Have a great night everyone!
Lauren (half marathon finisher)