The Story of My Sewing Machine

While I was in Maine I had the chance to reconnect with an old friend, my sewing machine. I had loaned it to my Mum, and she has left my old friend in a closet all summer, instead of using it to sew a dress for me, which was why I left it in her care to begin with. I took my friend out of the closet and used it to finish the baby quilt, because it is the best sewing machine in the world and I love it.

This made me want to write a post about it, and since I named my blog after it, I felt my machine needed it's own post.
As Maria says "Let's start at the very beginning, a very good place to start.." This sewing machine belonged to my great-grandmother Mabel Dysart. She used it in her 5 and dime store to alter dresses that women bought.  From what I have been told my Mum used this sewing machine a lot when she was younger, and loved it. Let's skip ahead because I don't know much else in between. I can remember going to Maine when I was younger and my Mum would go to Grammy Dysart's house and borrow the machine and use it to sew stuff like curtains for our camp. She always used to tell me that when Grammy died all she wanted was the sewing machine. Then came my Mum's biggest mistake; she let me use the sewing machine. I remember making a pair of shorts using the sewing machine one rainy summer when we spent the week at camp. When we were leaving to come home to New Hampshire we took the machine to return to Grammy and I showed her my shorts and she said; "I am so happy you have learned to sew Lauren, I think you should have the sewing machine." And then she whispered, loudly, "And don't let your Mom use it unless she asks you first." I thanked Grammy and hugged her and turned around to see my Mum's face, I think it was the saddest I have ever seen her. You think this would make me sad and want to hand the sewing machine over to her, but you forget that I was about 13 and secretly liked making her sad. This is one of the most regretful moments of my life. I still feel bad about the look on my Mum's face. Just thinking about it gives me a little twang of guilt in my stomach. But, if I had never been given that sewing machine I might not have been as interested in sewing, and then I never would have been as crafty and would have no reason to have a blog. So I hope my Mum forgives me, but I still feel bad so sometimes I let her borrow the sewing machine for long periods of time. And also if I ever want her to make me a dress (like a prom dress or bridesmaid dress) I have to let her use the sewing machine, because like I said it's the best sewing machine in the word, and she likes using it as much as I do. Here is it, isn't she a beauty? 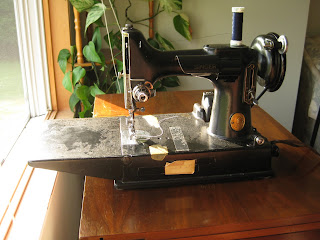 I love a lot of things about the machine, but my favorites are the way it smells (old), and the clinky sound it makes when you use it, the way it's been fixed 20 thousand times and still works, how the pedal is made for people wearing shoes, and this: 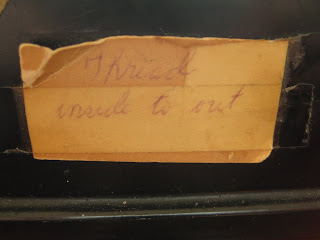 A note written by Grammy Dysart to tell you how to thread the machine. Oh I just love everything about it. It's sentimental and silly to say but I don't think I would be who I am without it.