Although it doesn't seem like it, I have been sewing quite a bit around here.  I just can't tell you about it. Well. I can tell you about one project.

My friend Jaclyn had a bridal shower last weekend, I couldn't go because I had another shower to go to (more on that later). For her shower I made her an apron. I've decided that aprons are the best bridal shower gift ever and will make one to give to every bride I know.  I made one last year for Sammy, one for Meera, and I also made one for my friend Heather for her shower, which was in April, but I forgot to take a picture...there was a cute baby at the shower and I was a little distracted. 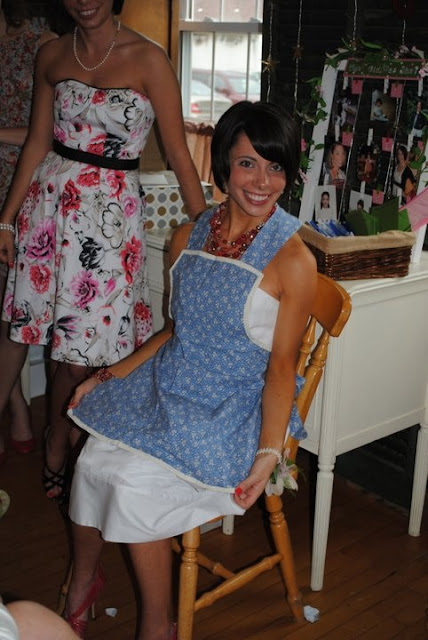 Here is a picture of Jaclyn's apron. Isn't she adorable? I used an apron that I already had to get the basic size and shape. I really wanted to have white bias tape for an accent, but I didn't have any and didn't feel like driving 30+ minutes to Joann's, so I just used some cream colored fabric cut into strips and made my own bias tape. I think it turned out even better than just white bias tape would have.I love when that happens.

I want to modify the pattern a bit more and work on making different tops and adding different accents. I've got plenty of time for that, and plenty of bridal showers to make them for!

Lauren
Posted by Lauren at 6:58 AM