Yesterday at 10:30 while I was working with two students the principal came onto the intercom to announce that there would be a snow day on Wednesday (today). I think my outburst of excitement was louder than the two students combined. I mean, what's better than finding out in the morning that you don't have to get out of bed because there is a snow day? Finding out there is a snow day before you even go to bed. While the two students planned to stay up late watching who knows what on the Disney Channel, I planned to do some serious sewing.
And that I did. I used this technique and finished chain piecing all of the squares for the quilt I'm working on. I just had to get a picture of the long chain before cutting it apart and making it into pinwheel squares. 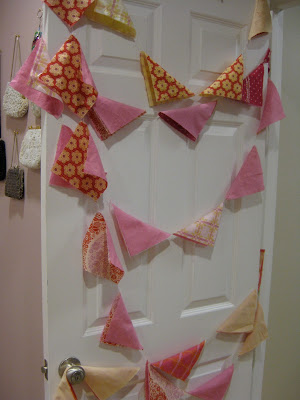 Pretty huh? It makes me think of the bunting I have want to make for decorations for our wedding.

Now all of the chained pieces are cut apart and most have been sewn into squares. I stayed up far too late last night working on them, then stayed up even later watching several episodes of "The Office" on Netflix. Did you know Pam and Jim kissed?! We just had to watch more to find out what happened. Today I thought about doing some more sewing but Charlie and I went skiing instead.

Just a few more blocks to go and then I can start sewing it all together.