Last Christmas I asked my Mum to get me a kit (or 2) to make felt ornaments. I had found the kits with instructions, felt, and all of the other supplies included at Posie Gets Cozy. My Mum did indeed buy me the two kits and I made one kit while I was still in Maine for the holidays last year. I posted two of the three here. This weekend we got our tree and pulled out the box with decorations in it and I realized that I still had a whole other kit to make three ornaments. After setting up the tree I got to work making this kit. I watched "Little Women" and "Gone with the Wind" while making these. Does that give you an idea of how long they took? And I only got two of the three done! 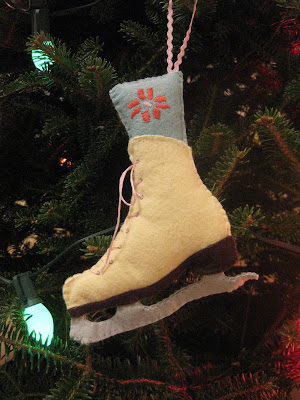 Super adorable ice skate. The kit gave yarn to make the pom pom but I ran out of steam on Sunday night and didn't make it. I'll get to it someday, until then I think the state looks pretty darling without the pom pom. 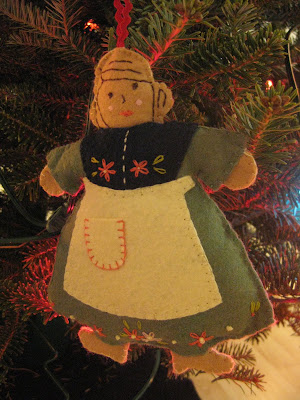 Little gingerbreak girl. She reminds me of the woman from "The Sound of Music" who keeps bowing after the concert so the von Traps can escape the Nazi's, but all that aside I think she's awful cute too. 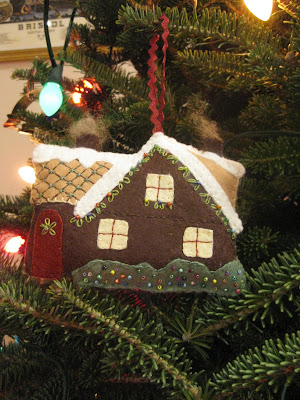 Lastly, here is the house from the other kit that I did not show last year. This one is Charlie's favorite, I think because he would like to live in a house like this one someday. I guess I wouldn't mind that, after all it is quite a charming little house. Definitely under 1000 square feet.

Hopefully the last felted ornament will be finished soon. I just need to think of another long movie to watch while making it, and perhaps one that won't make me cry; it's harder to sew with teary eyes!

Lauren
Posted by Lauren at 4:25 PM