Halloween is upon us. Today Charlie and I went to 4 stores searching for elements for his Halloween costume. I will update after the party with pictures of his costume; but I will just tell you that it is great. Today I also remembered we have had two pumpkins sitting around since my fall adventure back in September. While Charles was cooking dinner tonight I was busy gutting and carving our two pumpkins. I started with the small one first, and am not that happy with my results. We have very nice knives, today Charlie said; "You're going to carve a pumpkin with a 40 dollar knife!!!!" And carve away I did. I blame the nice 40 dollar knife for my poor quality carve job on the first one: 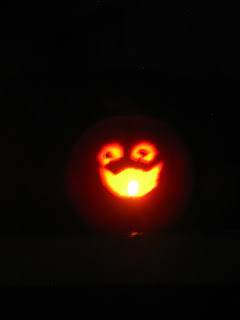 But I also think the small size of the pumpkin also had a negative impact, as well as that fact that I drew the design on the pumpkin with sharpie and was forced to cut that out so that sharpie wouldn't show. It's cute but nothing to write home about. After the unsatisfying results on the first one I was a little hesitant about the second. I was going to just do another face, but Charlie convinced me that I had more artistic talent and should try something else,"branch out" he said. We came up with some ideas, like that state of New Hampshire, or The Old Man in the Mountain. Then I found a picture online and decided to do a haunted house: 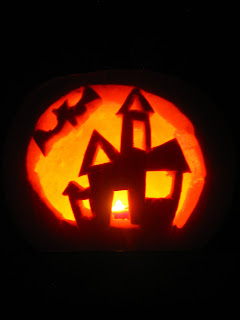 The shapes are all straight cuts and then a lot of just carving away excess, so it was more my style and easier than trying to get curved cuts.
I also tried a new technique that I made up. I drew the outline on a plastic bag with a sharpie and then duct taped it to the pumpkin and used that as the outline and cut through the plastic and the bag. That way you don't have to draw on the pumpkin and be stuck cutting things out since there is sharpie all over them. I was surprised Charles did not yell at me for cutting plastic with our nice knives. 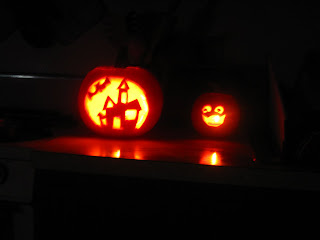 They both look pretty nice on our counter. And the apple spice tea candles burning inside smell very nice too :)
Has anyone else carved pumpkins recently?
Have a great night!
Lauren
Posted by Lauren at 8:49 PM