There are two reasons I don't cook:

Let me preface this story by telling you that last weekend I had the best pizza I have ever had in my life. I can't figure out what was so good about it but it was good, mouthwateringly good. Our friends Mike and Jaclyn made it for us. And Charlie and I have been raving about it since then.

Today I decided to try to make pizza as good as Jaclyn and Mike did. I bet you can guess where that got me. Yep, it was one big disaster. I rolled the dough, carefully placed it in the pan, then smushed the corners down to make a nice crust, added sauce, cheese, artichoke hearts and roasted red peppers, popped it in the oven and 12 minutes later Charlie and I had a huge mess to scrape off the pan. He said "did you roll the dough in the pan Lauren?" hum I thought where could he be going with that question? "No, but I did smush the corners down, and maybe some of the middle" I said. "Oh....." said Charlie.

Apparently smushing is not a term you should use or do whilst making pizza. The dough seemed to chemically bond with the bottom of the pan making it nearly impossible to get the pizza off of the pan. Charlie did his best to scrape the pizza off and salvage our meal, I would have simply thrown the pizza, chemically bonded pan and all, into the garbage. 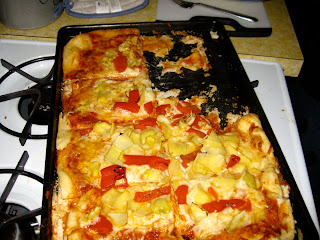 Yum....the pizza turned into more of a goulash that needed to be eaten with a fork and knife. And the artichokes and peppers tasted like nothing so it was mostly a big goulash of nothing. Nothing like Mike and Jaclyn's pizza. But Charlie did eat it. Doesn't he look impressed with his meal? 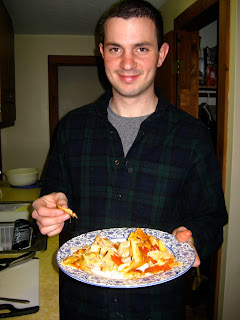 He must really love me to put up with my bad cooking and teflon covered pizza. He even did the dishes. (I love you Charlie).