I cannot remember who had the idea for us to sew a quilt together me or Charlie. In September after pinning a lot of patterns we decided to go with a Log Cabin pattern and Charlie helped me do the math and pick out the fabric we both liked. I sewed 29 blocks and he sewed one. Then I realized around block 34 that there wasn't enough fabric so we bought more and I finished the 48th block, bringing my total to 47 and Charlie's to 1. He did help me lay them out over Christmas and decide on a pattern. 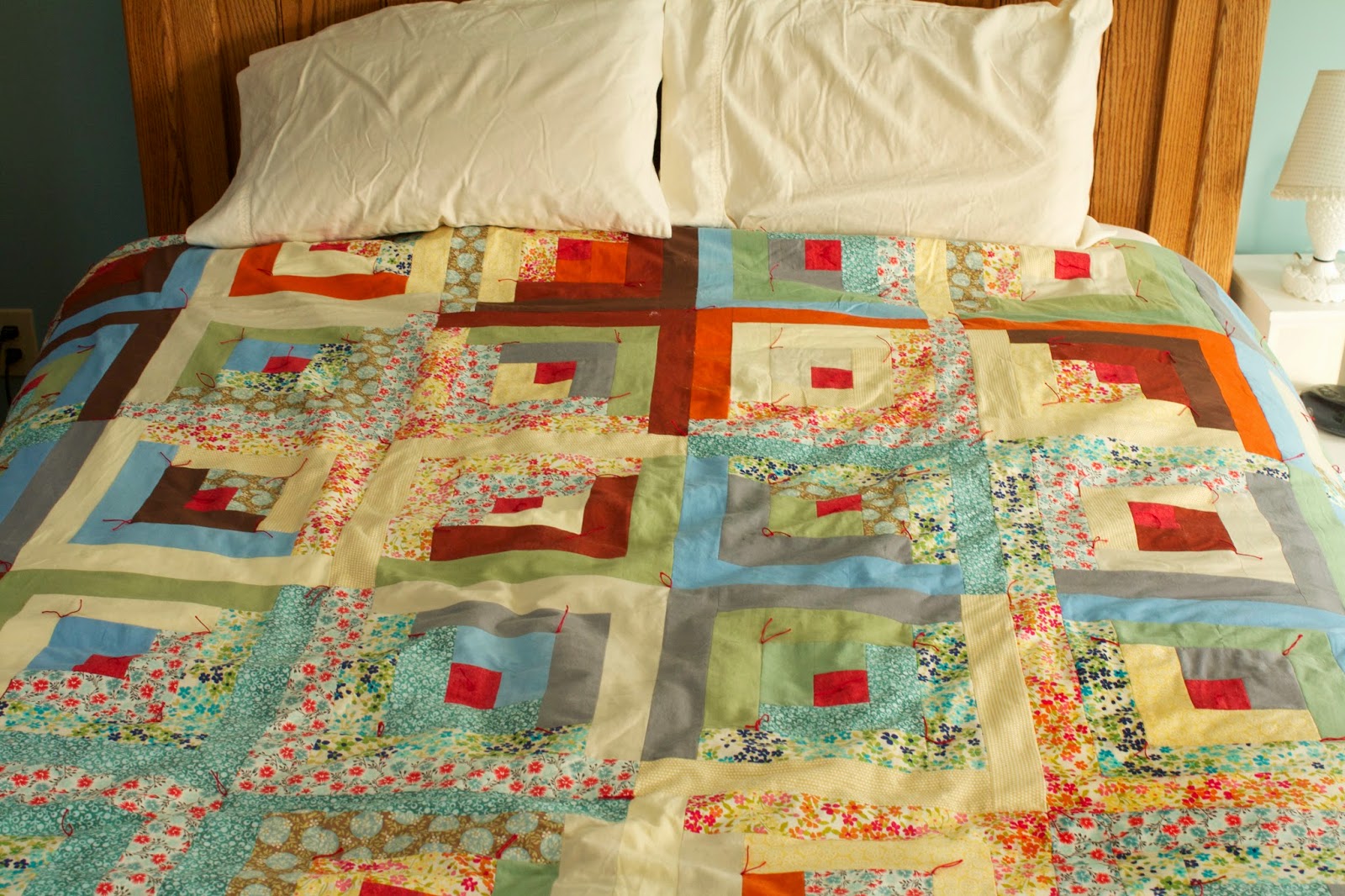 We should have done more research on how to sew a long cabin quilt because I messed it up and the blocks ended up not matching perfectly. I should have started each block with a solid as the first color, but instead I did half the blocks starting with solid and half starting with a print, which kept me from getting super bored, but also screwed up the pattern and resulted in blocks that do not match. I'm pretty sure no one would notice but me. Can you tell? 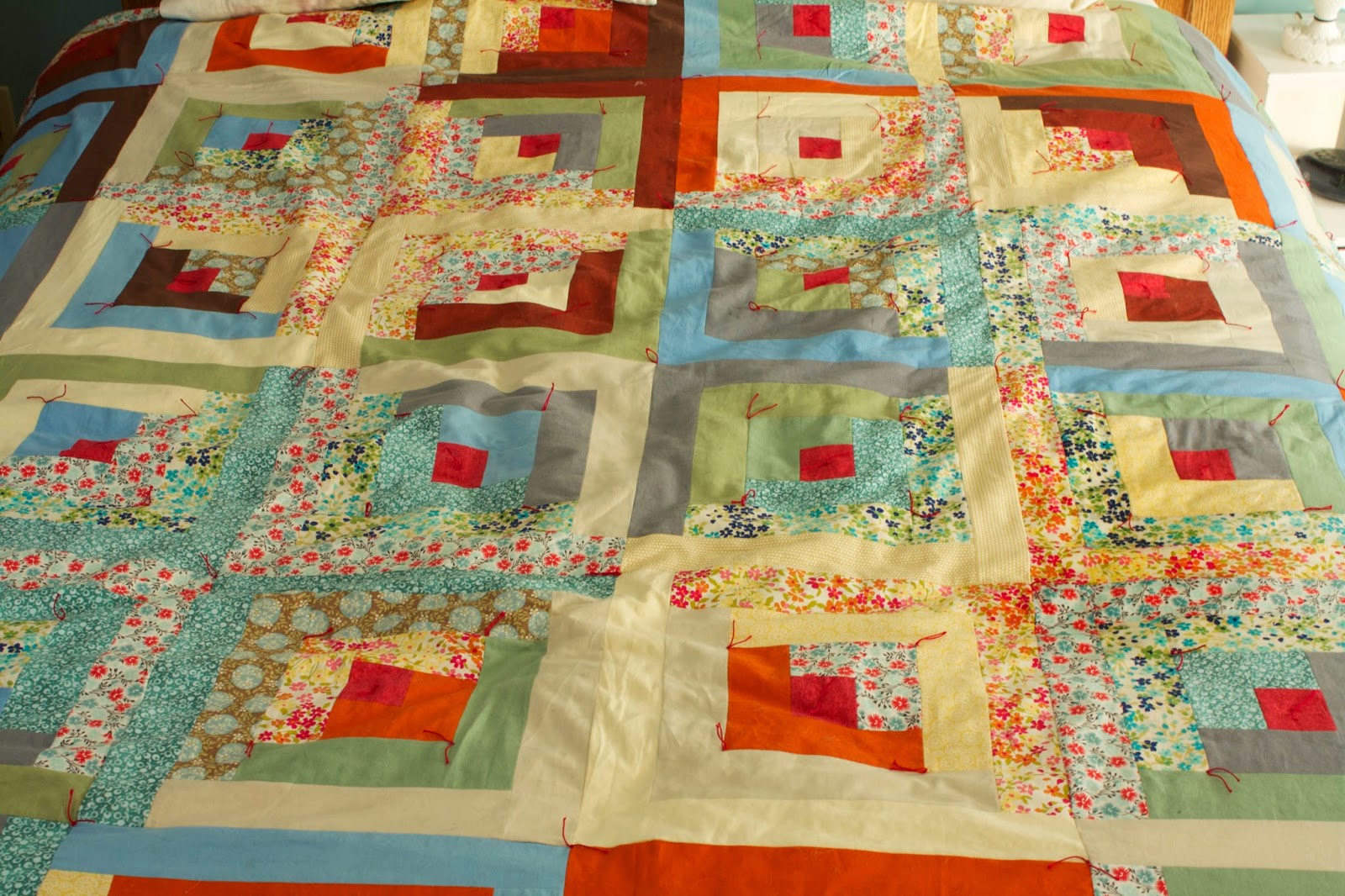 Don't look too close....here's a cute dog on a quilt picture to distract you! 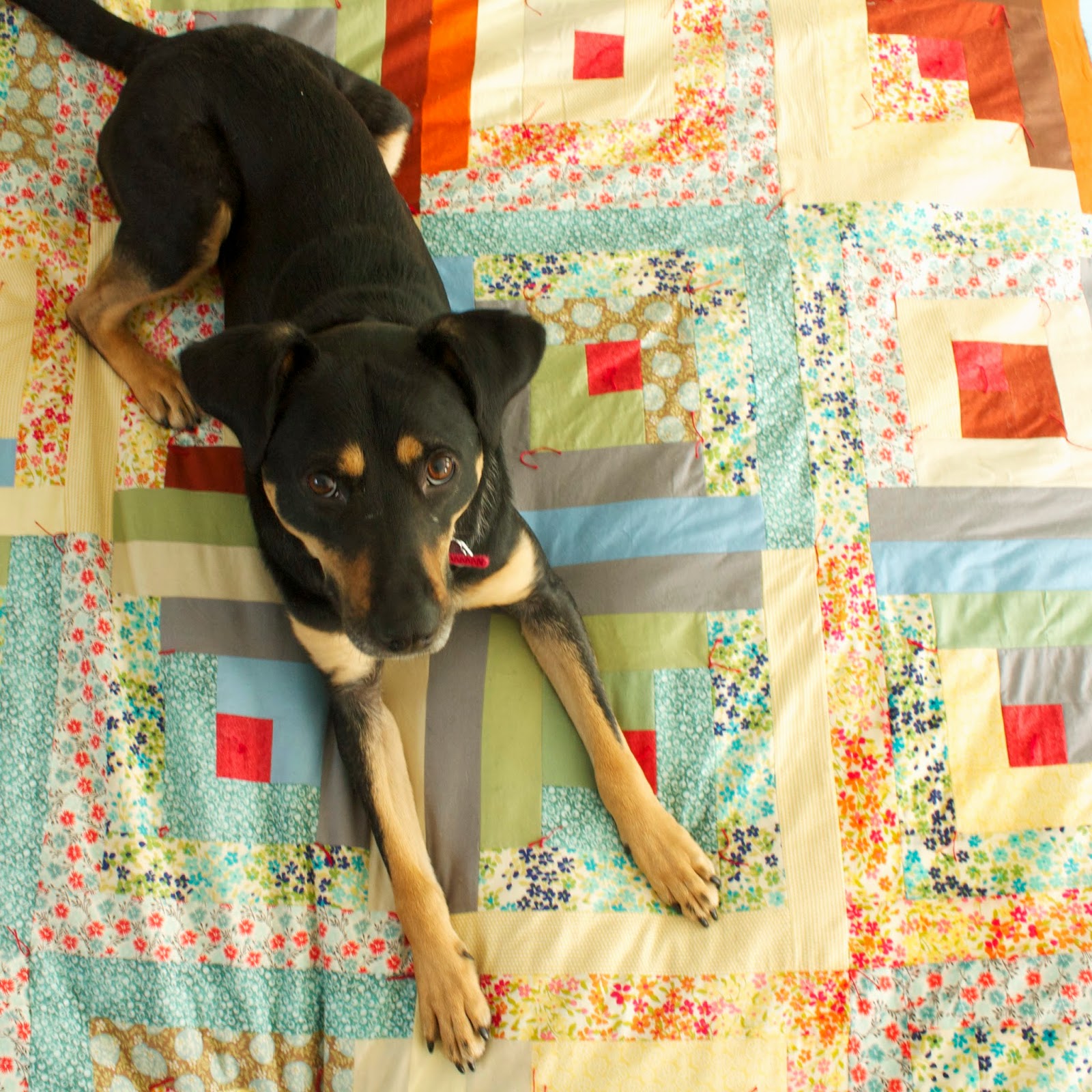 Then we (I) did the math and we bought the backing fabric. Over a snow day I laid it all out and realized the back was too small so I added some scraps from the quilt to add the last few inches I needed. Moral of this story is that we are both bad at math when it comes to making quilts. Thanks heavens for scraps and fabric stores. 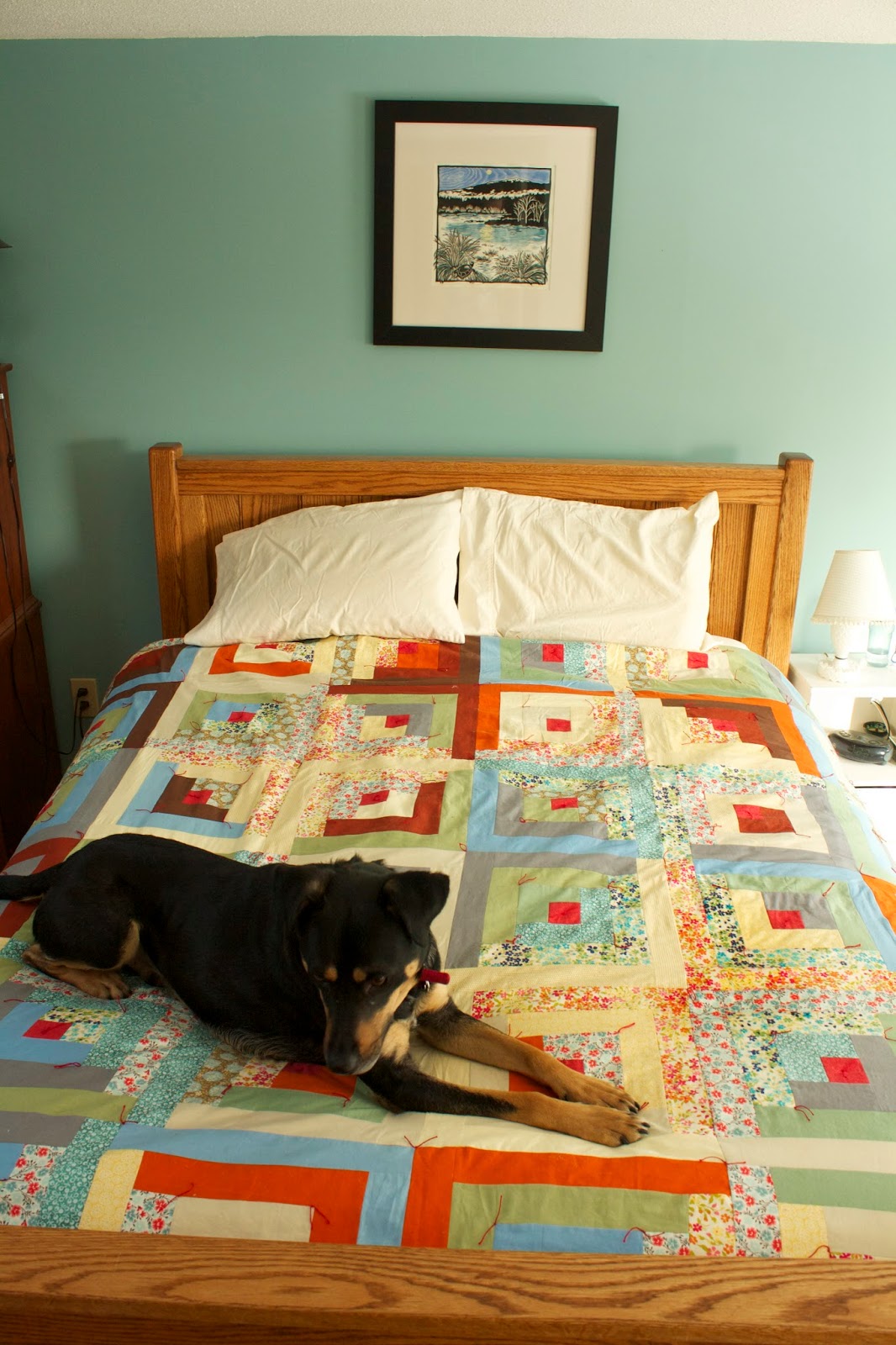 I thought about hand quilting it, then I realized it's a king sized quilt and came to my senses. It's tied, which is super fun and easy and not nearly as time consuming as hand quilting. Sewing the binding took me at least 5 days because my eye kept twitching and a kind sized quilt = a whole lot of freaking binding! 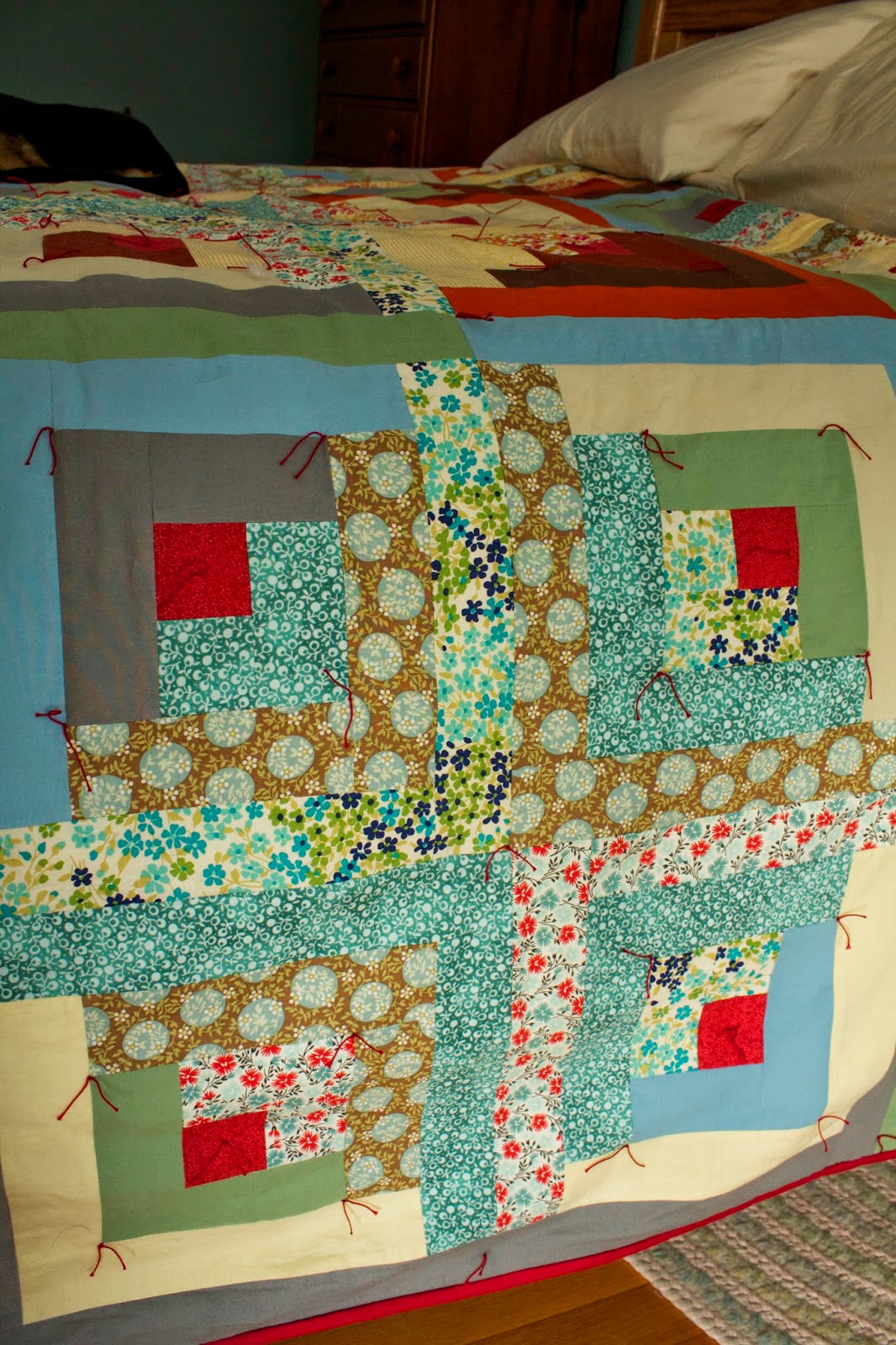 To be 100% honest this quilt is finished about 10 months faster than I thought it would be, so math issues aside it's a total success. I would not have picked out all of the fabric, but I really like how it all turned out.

Have you finished anything way ahead of schedule recently?