Once my Grandmother told me, "If you have two of something you can call it a collection." Under those stipulations I have a large collection of shoes, clothes, jewelery, and sewing supplies. I don't have many real collections, but the two that I do have came to me quite accidentally. My first is my collection of beaded purses. I began inadvertently collecting them in middle school.

My first beaded purse was acquired one rainy Saturday afternoon when a friend, Lexi, and I went with her Mom, Cindy, to an antique shop. I spotted the beaded purse in a case and was enthralled. I loved the intricate bead work and the mix of white and cream beads. I knew I had to have it. I am not sure how much the purse cost but I do remember that I didn't have enough money to buy it and Cindy was gracious enough to step in and provide the rest of the money. I love that purse and still use it for special occasions such as my high school prom, and several of the weddings I've been to. 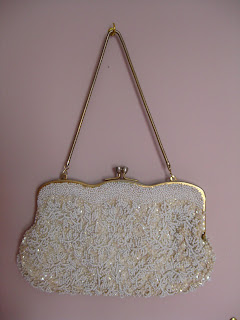 My second and third purses were also given to me by Cindy. She gave me the black one as a Christmas present a few months after she had helped me pay for the first one. I love this one as well, but the long beaded handle is fragile so I do not use it. 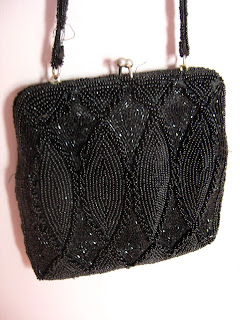 The gray sequined was a birthday gift from Cindy. I wish I still had the card that accompanied the purse, but I have long since lost it. Fortunately, I remember most of what it said. Cindy wrote that one of her aunts (I believe) had used the purse for many years and had given it to her a few months prior. She said that her aunt was spunky and fun and she knew that I embodied those characteristics and should have the purse and continue to use it for fun outings. I would like to think that I have lived up to the expectations, the sequined purse has been my companion on many 21st birthday outings, and two bachelorette parties. 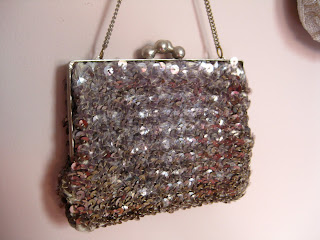 The other white purse as well as the tiny white pouch were purchased at another thrift store on an outing with my Mum and the fish pouch was a Christmas gift from my Mum. 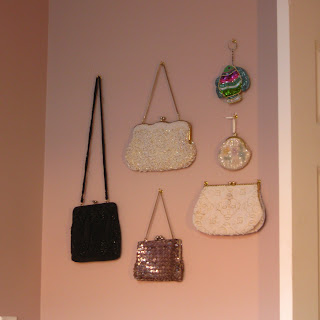 In high school I displayed the purses on a wall in my room. Six years later I finally have space in our new apartment to display them once more. I love having them hanging up for all to see. I especially like that they remind me of Cindy, who was a very generous and thoughtful woman.

My second collection just became a collection yesterday. On the way home from work I noticed a sidewalk sale and saw a vase that looked a lot like one I had at home. The first one I bought at my aunt's yard sale back in June for 75 cents. This one was rather dirty so I got it for 25 cents. When I got home I cleaned the second one up and placed it on the shelf next to the first one, low and behold they were exactly the same. This absolutely baffled me until I looked online and found 10 that were also exactly the same. According to my grandmother's saying I now have a collection of milk glass vases. They might be making a special appearance at our wedding next summer. They are mostly for decoration/ accessorizing, since Charlie would probably go into anaphylactic shock if I ever brought flowers into the apartment. 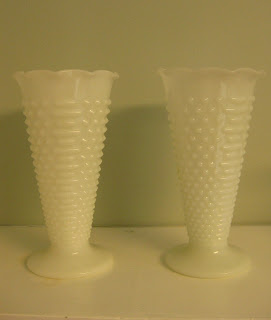 Those are my two collections. What do you collect?

Lauren
Posted by Lauren at 3:33 PM