A while back my friends and I were brainstorming about all of the fun things we could do once we were done studying for our big huge test. Here is what I remember: read for fun, go to the beach, watch TV, exercise, and then I chimed in: start a sewing club. And thus, sewing club was born.

The club has three members including myself. Our first "meeting" consisted Kirsten, Jill and I going out to eat and "planning" our projects and voting for which one we wanted to make first. The second meeting came shortly after Charlie and I got engaged so that meeting consisted of Kirsten crying in the aisles of Joann Fabrics, us buying fabric, reading wedding magazines and making dinner while chatting about color schemes. At this point Jill became busy and didn't come to a few meetings. The third meeting was canceled because Kirsten and I weren't feeling well. Shortly after this I realized that I was moving away very soon and that we had better have a sewing club meeting in which we actually sewed something! On Wednesday we had our first and last actual sewing club meeting.

Kirsten wanted to make pintuck pillows. She found a tutorial online; I thought it was funny that she found it on one of the blogs I really like and have on my side bar: The Long Thread. Jill ended up coming to the meeting and although she didn't sew she offered lots of moral support and mathematics help. Kirsten worked very hard and even finished some steps before I did and patiently waited for me. This project was very fun and easy to teach someone else how to do. I would recommend this project to anyone in a sewing club, or anyone who wanted a nice decorative pillow, since I don't know of many sewing clubs. Here are our finished products. 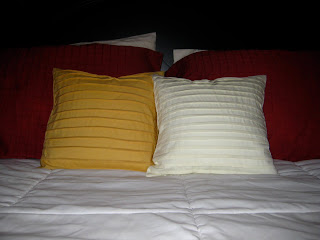 Kirsten gives this project a thumbs up: 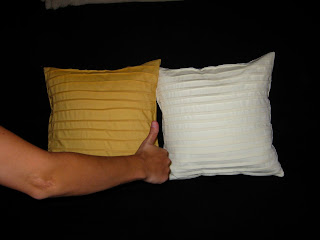 She made the gold one and mine is the plain white one. After we were done sewing, Jill and Kirsten made us all dinner. It was excellent, because they are great cooks, and also because my contribution was setting the table and staying out of the way. 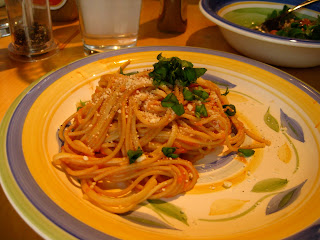 Jill wanted me to be sure to show her contribution on my blog. Doesn't it look great? I have no idea what was in the sauce of how they made it, but it was delectable.

Overall, it was an extremely successful and satisfying sewing club meeting, it's just a shame it was our last, since I am moving on Sunday. Boo hoo. Jill has already suggested that we have a Skype sewing club. The only problem is, you can't Skype delicious meals to each other after the sewing project is done.

Happy Friday to everyone! Be sure to check out the Sew N' Tell.

p.s. The plus side of moving is that you will never have to see another pillow picture taken in our cave of a bedroom. 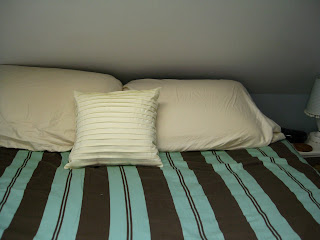 If that doesn't look cave-ish enough how about this one? 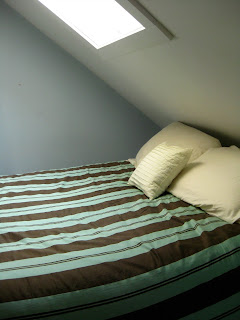