Last week I went to New York City. My Grammy invited me to go along with her, and being an unemployed graduate student with a month long break I gladly said yes. My only request was that I get to spend time in the garment district. And low and behold when we got off the train at Penn Station my uncle met us there, walked us 6 blocks and we were staying in a hotel right IN the garment district.

Now in case you were unaware, I love Project Runway. If you're my dad read the next few sentences, if not, and you know what this show is, you can probably skip ahead. Project Runway is a reality show about people who want to be famous clothing designers and they have challenges and have to design clothes for models. In the show the designers go to a fabric store called MOOD. One of the hosts of the show, Tim Gunn, takes all the designers there once they know their challenge, gives them a time limit to shop, usually 30 minutes, and a budget. Then the designers run around in a frantic way buying fabric and zippers and muslin. At the end they get these really nice bags and then all leave the store and say; "Thank you MOOD."

Okay everyone else start reading again!

So on Saturday while my Grammy went to a play my Uncle Doug and Bryan, his partner, took me to MOOD. MOOD is inside a building and so I felt very cool knowing that even though the building didn't have any signs or anything that the shop was inside, and up 3 flights of stairs.

My Mum sent me $40 for my trip and Doug and Bryan joked that they were going to give me 30 minutes to shop and only allow me to spend the $40 my Mum had given me. It's a good thing they gave me more time because MOOD was more than I had ever dreamed of. 3 floors of this: 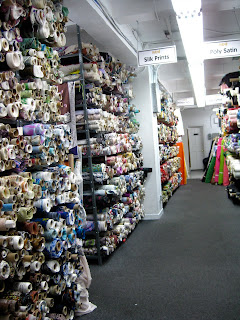 Nearly floor to ceiling delightful kinds of fabric. All of which are nicely arranged based on style and material. For example here is Doug in the alpaca section. 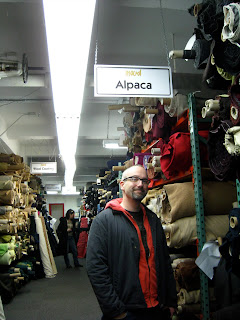 And here I am sampling the entire wall of fringe and sequins, oh la la: 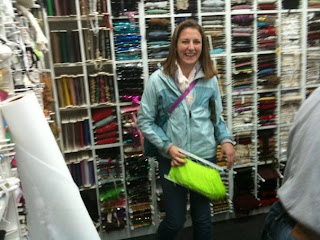 I thought that the best part would be the huge selection of fabric...and let me tell you it was amazingly awesome, but I must say the absolute best part of MOOD was how nice the people who work there are. The employees seem to just walk around searching for people to help. It's like they get paid on commission or something! I am not sure if I say this because the people who work at Joann fabrics are complete Bozos and I only have them to compare to, but even Doug thought the people were really nice, and he's a New Yorker (I'm not sure where I am going with that comment so I will stop before I get into trouble).

I ended up buying 2 kinds of fabric on this trip and as I was approaching the register to pay I saw a box of zippers on the floor that said "7 inch zippers 30 cents, over 7 inches 75 cents". I have said numerous times that I am bad at math, but I knew this was a deal! I snatched up all the pretty colored zippers I could find with visions of hundreds of mini box pouches.

Doug an Bryan were not as enthralled as I was so they sat near the door and happened to strike up a conversation with one of the employees, a nice 20 something woman named Sarah. When I approached them with my treasures in a nice (but not as nice as Project Runway contestants get) MOOD bag I said very excitedly; "Look zippers for 30 CENTS!" And then Sarah said "Oh you like my zipper box? That was my way of getting rid of inventory without having to write it all down." I had to restrain myself from asking her to be my new best friend, because I already have one, and because people don't usually like it when you have known them for .25 seconds and ask to be their best friend. I just told Sarah that I really did like her zipper box and then we left. Except halfway down the stairs I remembered to say; "Thank you MOOD" in my best Tim Gunn impersonating voice, and then Sarah said "You're welcome". I know we are meant to be friends in another lifetime.

Luckily this is not the end of my story. Oh no. I only bought two kinds of fabric out of all the wonderful kinds there because I was so overwhelmed. Only two, how sad. On Monday before we had to leave I got up early and showered and packed and told Grammy that I was heading to MOOD on my own to get some more supplies. This time I really did have a 30 minute time restriction and funds were running somewhat low. I did end up buying two more kinds of fabric. We won't get into how much over-budget I went on this episode, but let's just say I would probably be disqualified from Project Runway. Here they are 4 extremely soft and lovely jersey-ish fabrics: 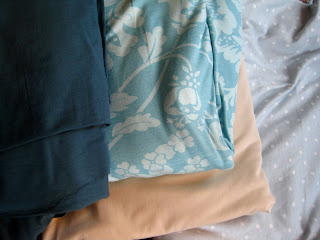 I am planning to make some cute summer dresses and a cool shirt that I have been dreaming about for ages. And as for the jersey fabric which I usually shy away from...don't worry Lauren, you've got a serger!

And now I am off to start sewing!

Lauren
Posted by Lauren at 2:54 PM