As if the Sew N Tell wasn't enough of a deadline, I am going to see my Mum later today, and since last weekend was Mother's Day, and since I am a bad daughter and didn't send her a present, I was up late last night working on her (late) present. And I might have been up too late, because I made an idiot mistake. I sewed the handles together the wrong way! It even said in the directions to be sure to not make this mistake, "Doh!" 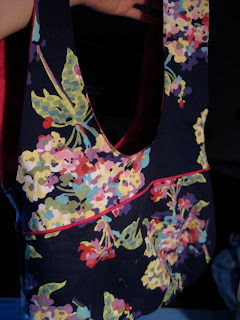 (please excuse the awful photo, it was late and I was angry)


A lot of seam ripping later I had the finished project: 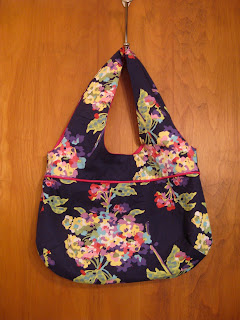 I used a free pattern I found here, and I also added an inside zippered pocket using my favorite tutorial (steps 12-14). And I used my last twill tape label, I guess I'll have to make more. I thought the purse needed a little something extra so I added some piping, but only had white on hand. Instead of going out and buying another color of piping I covered the white with little scraps of the inside fabric, so it coordinates perfectly. Changing the piping color was way easier than matching up the piping at the seams, does anyone have any suggestions for that? The piping never ever matches!

It's going to be hard to give this purse away, but at least it's going to someone I know will treat it well. I think I will make another one for myself as a summer purse. Maybe next week.

Happy Friday!
Lauren!
Posted by Lauren at 7:35 AM