I try to drag Charlie into quilting shops as few times as possible. But sometimes I just have to beg him to stop, and sometimes he doesn't want to wait in the car, and then he ends up following me around making comments like, "Don't you want to save your money?" or "Aren't you on a fabric freeze?". Several months ago we stopped at a quilt store and I thought that this would be the result when Charlie decided to come inside with me. However, I was pleasantly surprised when I looked over my shoulder and realized he wasn't tagging along behind, he was in the corner looking at something..."that's weird" I thought to myself. I went over to be nosy and see what he was admiring. Turns out he was looking at a few sample "Accidental Landscapes". I can't remember the exact conversation we had but Charlie said he liked them and I said to myself; "Self, you should be sneaky and buy the pattern and make one for his birthday." And that's what I did, sneakily bought the pattern, sneakily compiled/ dyed the necessary fabric, and sneakily worked on the project when he was at work. 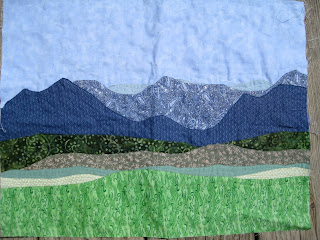 Here's a close up: 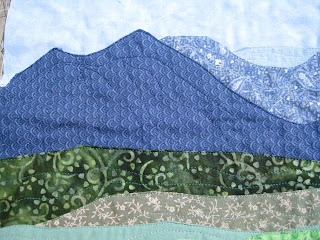 I tried to make it look like a ski mountain.

Charlie says he wants a birch bark frame, and he also said he wants a path or a tent or something a little extra. Any ideas are welcome.

p.s. Tomorrow is my 21 mile trail race, cross your fingers that it doesn't rain!
Posted by Lauren at 6:07 AM